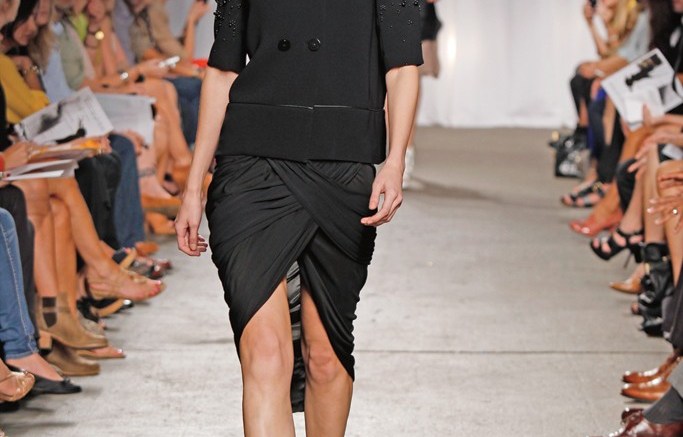 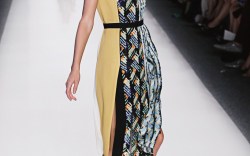 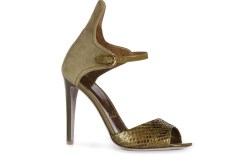 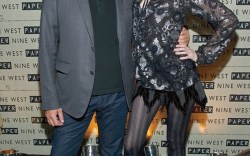 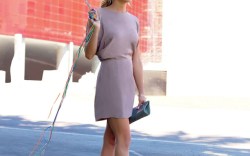 Project Runway
With every great ensemble on the runway comes a standout pair of shoes. And designer Tiffany Tuttle took it up a notch during New York Fashion Week with four runway collaborations: VPL, Doo.Ri, Mandy Coon and Complex Geometries. “Four was a lot. My factory was saying, ‘OK, enough is enough,’” the designer joked while taking in the Doo.Ri show. “But they’re all pretty different looking, which made it fun.” At Doo.Ri, Tuttle said she went for a vaguely 1970s feel with chunky-heeled platform sandals.

Nicholas Kirkwood also had a Fashion Week presence, creating lace-up ankle-strap pumps for Prabal Gurung. “We worked on a style based on restraint and provocativeness, lightness and clean lines,” said Kirkwood.

Rodarte, which collaborated with Kirkwood in the past, went with rising shoe designer Burak Uyan this time around. Uyan created a woven metallic bootie and ankle-strap sandal with a metal platform. The designer brought the shoes straight from his factory in Milan, saying, “We had spoken over the phone, but I met [Laura and Kate Mulleavy] for the first time to show them the shoes the day before the show. It’s super exciting because everybody’s focused on their shoes [right now].”

Max Kibardin also hit the Big Apple last week for the Reem Acra and J. Mendel shows, for which he created custom shoe styles. The designer, who jokingly called collaborations his “hobby,” said, “For Reem, we did everything in gold, plus a brocade sandal with rose motif. It was like a fairy-tale collaboration.” As for J. Mendel, Kibardin said, “We had to find the balance of sophisticated but edgy. The shoes were a stiletto with a very complicated upper combining five materials.”

Carine Tribute
One of the most memorable moments from New York Fashion Week was Carine Roitfeld’s karaoke bash, and the former French Vogue editor-turned-Barneys collaborator took her turn on stage in Sergio Rossi sandals made especially for her. The open-toe python and suede stilettos, created to celebrate Sergio Rossi’s launch at Barneys, were designed by the brand’s creative director, Francesco Russo. “She’s one of the most amazing-looking women ever. I was inspired by her incredible style, her strong femininity and magnetism,” said Russo, who inscribed the phrase “dedicated to Carine Roitfeld” in each pair of the limited-edition shoes, which are being sold exclusively at Barneys’ Madison Avenue store.

Vocal Chord
Fred Allard has his hands full. The Nine West creative director is already in talks with a new guest collaborator (to be announced this winter), after riding the success of the Karen Elson partnership for Nine West Vintage America. And while he kept mum on details, he did offer a few hints: “She’s American, based in New York, and she produces everything in the U.S.” But even with another line in the works, Allard still made time last week to celebrate with Elson, gushing over her ability to inspire the industry. “I describe her as a muse from the 1920s,” he said at the Vintage America launch party at Beauty & Essex in New York. And Elson wasn’t the only one getting praise. Designer Jean-Michel Cazabat also showed up for the soirée, saying, “[Fred] is like my brother.” Also in the mix was Jerome Rousseau, who came for Elson’s performance. To top the evening off, Mischa Barton and Lindsay Lohan both made late-night appearances, but it was Lohan who created a scene with photographers.

Sky High
For Kristin Cavallari, the sky is the limit. Or at least when it comes to shoes. “The higher the heel, the better,” she said. And Cavallari thinks her love for height may come in handy on this season of “Dancing With the Stars,” which premieres tonight with Cavallari and cast. “My heels are 2 inches tall [in the first] dance. I’m doing the cha-cha with a lot of booty shaking,” she said. “It’s easy for me because those are the shortest heels I’ve ever worn.” And now, the “Laguna Beach” star plans to dish about her footwear obsession publicly on Chineselaundry.com. Cavallari was tapped as the online brand ambassador and will provide styling tips and post videos on the site. “I’ve always been a fan of Chinese Laundry. They are right on trend,” she said. “I want people to know you don’t have to spend a ton of money to look good.”

Match Point
There’s no place like home. After her first stint with Ellesse and an 18-year career on the court, tennis star Chris Evert is testing her hand at design for a return to the brand. “I was playing before, so I didn’t have time,” said Evert. “Now I’m really looking forward to being involved in the designing.” So what look will she go for? “I love the colors. I’d like to keep the reds, the orange and the yellow,” she said. But it won’t be all work and no play. Evert said she’s planning to take her 15-year-old son to Bali for a surfing trip soon. And while he’s the expert, she plans to give the sport a try after a recent lesson in Hawaii. “I have good balance, so it was OK,” she said. “And it wasn’t 9-foot waves or anything.”

Family Ties
It’s getting more and more difficult to keep up with the Kardashians. With Fashion Week in full force, the family had a full schedule. Kim Kardashian made an appearance at the Vera Wang show to support the designer of her recently worn wedding gowns (there were three). The newlywed also joined siblings Khloé and Rob to cheer on younger sister Kylie Jenner as she walked the runway at the Abbey Dawn show by Avril Lavigne. Their packed schedules follow the debut of the Kardashian Kollection for Sears. “We wanted to make sure we offered pieces that would work for a variety of different personalities – from the glam gal to rocker chic,” said Kim Kardashian.