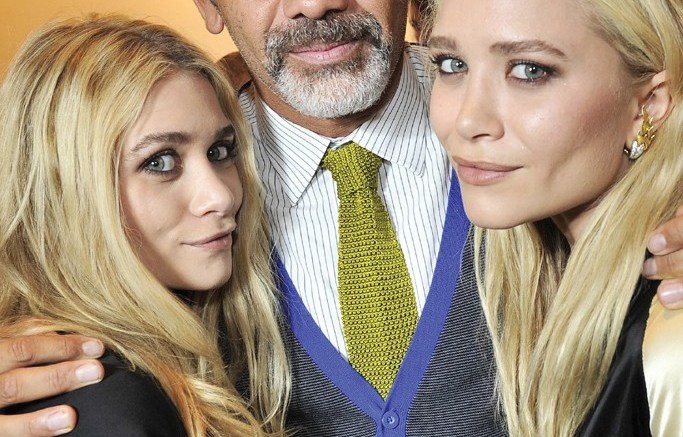 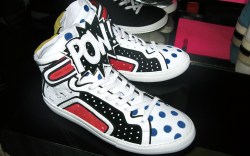 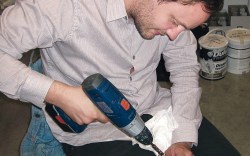 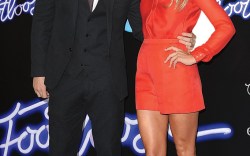 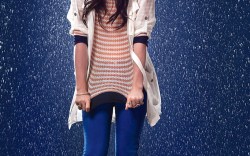 Christian Louboutin painted the town red, making the rounds at several of the week’s hottest events, including Kate Moss’ jewelry launch for Fred, Mary-Kate and Ashley Olsen’s handbag party for The Row, L’Officiel’s 90th anniversary and a French Vogue dinner, where he caught up with British designer Charlotte Olympia Dellal.

“Sat next to Louboutin at ‘French Vogue’ dinner and discussed rugby, naturally,” Dellal quipped in a tweet.

A few days later, she showed off her 1950s Miami Beach-inspired collection and talked about the recent arrival of her second son. Will she venture into children’s shoes? “Not yet, but I will the second I have a girl!”

Fellow Brit Nicholas Kirkwood gave birth to a handful of collections this season, including the well-received Pollini line and footwear for Paco Rabanne, which relaunched on the Paris runway. Kirkwood, always the perfectionist, was making final adjustments on the shoes at his show space in the Marais district in between appointments for his own collection. “The heels were inspired by a sculpture by Anish Kapoor,” the designer said of the Paco Rabanne looks.

Roger Vivier’s Bruno Frisoni got inspired this season by a coffee-table book on African masks. The designer also went back to his roots, experimenting with denim on pointy-toe flats and espadrille wedges. “The first Bruno Frisoni collection I ever made was denim,” he recalled. “It was perfect for this season because we were missing a casual.”

Pierre Hardy has been all about casual living in his personal life, with trips around the world this summer to Italy, St. Barts and Cape Cod — “I love the Americana style in Cape Cod,” he said — but for his spring ’12 line, the designer took an assertive stance with dripping liquid and graphic designs in metal. He also introduced men’s trainers and created a comic book-inspired high-top, complete with a “Pow!” applique as a tribute to the late-pop artist Roy Lichtenstein.

Sergio Rossi’s creative director, Francesco Russo, has also been paying homage — to friend and collaborator Carine Roitfeld, for whom he recently designed a one-of-a-kind shoe.”I was just talking about you!” Russo exclaimed, when he bumped into the former French Vogue editor at the Ritz during an interview with Spy. “Good girl,” he told her, pointing down at Roitfeld’s Sergio Rossi ankle-strap sandals in green snakeskin.

Roitfeld certainly knows how to make a statement, as does designer Tabitha Simmons, who presented her newest collection at the Rue Rivoli apartment where Woody Allen filmed “Midnight in Paris.”

The designer and stylist — who flew home to New York between Milan and Paris for a quick visit with her children — said she had several favorites in her collection this season, including her “piñata shoes” (Mexican-inspired high-heeled sandals with raffia fringe), as well as ankle boots and sandals featuring embroidered silk hand-woven in England. “It’s my version of a modern Liberty print,” she said. “I like to support small family businesses whenever I can.”

And Burak Uyan wasn’t taking any chances with his spring collection. Inspired by butterflies, he bought several preserved Indonesian butterflies and sent them to his factory to get the blue-green color palette just right.

Dancing Shoes
Everybody cut loose. The HSN team put their dancing shoes on for the Los Angeles premiere of “Footloose” last week, where the crowd was singing and dancing in the aisles, said Bill Brand HSN’s EVP of programming, marketing and business development. “I had to keep Mindy [Grossman] down, believe it or not,” joked Brand about the company CEO, who also was joined by Andrew Sheldon, EVP of television and executive creative director. The team mingled with the stars in preparation for the network’s 24-hour “Footloose” event on Wednesday, now being promoted in a special magazine from HSN, Paramount Pictures and Footwear News. Actress Julianne Hough (playing Ariel Moore) wore nude Ruthie Davis pumps to the premiere and Kenny Wormald (starring as Ren McCormack) chose John Varvatos shoes for the big night. “The ‘Footloose’ cast is so young and excited that the energy carried throughout the whole night,” said Brand. “In the economic climate we all deal with, its nice to have a movie that’s just fun.” The HSN on-air and online event will feature footwear, accessories, denim and beauty items from 13 brands that were inspired by the movie.

Stop Watch
Jessica Szohr has more to gossip about. The former “Gossip Girl” star — and face of Kohl’s new boot brand Aqua Stop — is currently in London filming the upcoming flick “Love Bite.” “It’s kind of like a love story [with] a werewolf story, too,” she said. But even with a bustling film career, don’t count her out of the TV world. While Szohr’s GG character Vanessa Abrams parted ways with her New York cohorts last season, she said you never know what the future holds. “The door has been left open, so you could see her [character] — or maybe not,” she hinted. And Szohr hasn’t put her love for fashion on hold either, which she said made the Aqua Stop gig a good fit. “[Being] from Wisconsin, I know how hard that can be [to look fashionable in bad weather],” she said. “You still want to feel comfortable and sexy, and shoes can make or break the outfit.”

Piano Man
Patrick Cox is hitting the stage. After working with Geox on a spring ’12 capsule collection, the designer teamed up with the brand yet again to create flashy footwear for Elton John’s Vegas show, “The Million Dollar Piano.” A longtime friend of the iconic musician, Cox made a classic brogue with Geox’s breathable leather sole in 14 hues. “Literally name any metallic color and we’ve done it. He’s an artist, he wants choices,” said Cox, noting the soles were dyed at an auto body shop to ensure they were completely stained. Cox and John met in the mid-1990s through London tailor Richard James (who is also the show’s costume designer) and have worked together on custom shoes ever since.