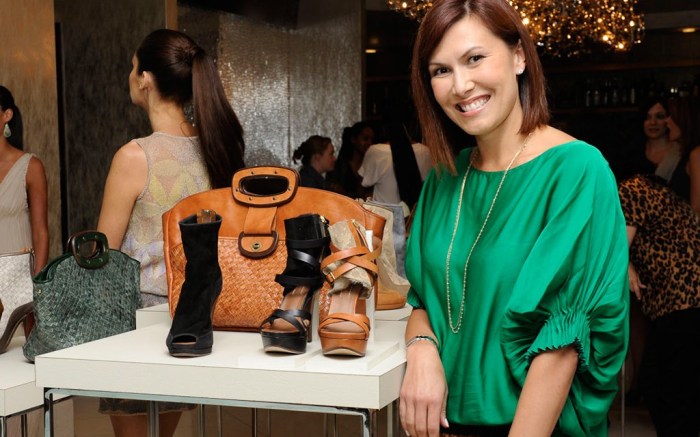 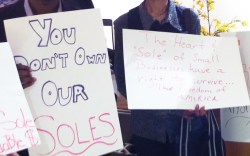 Ugg in Style
Ugg’s upcoming collection has a personal touch. At an evening cocktail event to preview the resort and spring ’12 Ugg collection, VP of product Leah Larson shared a sentimental story about her design inspiration for the tony new line. According to Larson, she created a wedge, pump and clutch bag detailed with laser-etched leather butterflies in honor of her late aunt, Cynthia, who had a penchant for the winged beauties. The series even carries her aunt’s name.

Red-Hot Rally
Let the debate continue. While Christian Louboutin SA was planning an appeal of U.S. District Judge Victor Marrero’s decision to allow Yves Saint Laurent America Inc. to sell red-soled shoes, customers who frequent Love My Shoes, a retail chain that focuses on affordable women’s footwear, were making an appeal of their own. About 20 people attended an event today at the Love My Shoes showroom in New York’s Garment District that was organized by the Affordable Association of New York and Love My Shoes. Their aim was to support Marrero’s decision, but also protest the fact that it only applied to YSL. Love My Shoes owner Robert Yeganeh said Louboutin’s attorneys filed a lawsuit against his company in March, forcing the retailer to stop carrying shoes with red soles. “We couldn’t afford to go up against [Louboutin] like YSL did,” he said, calling the recent decision a “double-edged sword” because, he claims, Love My Shoes is still under a court order that bars it from selling footwear with red soles. Also in attendance was customer Meggie Doyle, a 25-year-old actor and writer who proudly carried a sign that read: “We want red for less,” scrawled in crimson ink. “It’s ludicrous that somebody can claim ownership of a color,” she added. Yeganeh noted he plans to respond to customer demand by carrying at least a dozen styles of shoes with half-red soles for spring ’12. “A half-red sole doesn’t infringe on the trademark, but you can still see it,” he said.