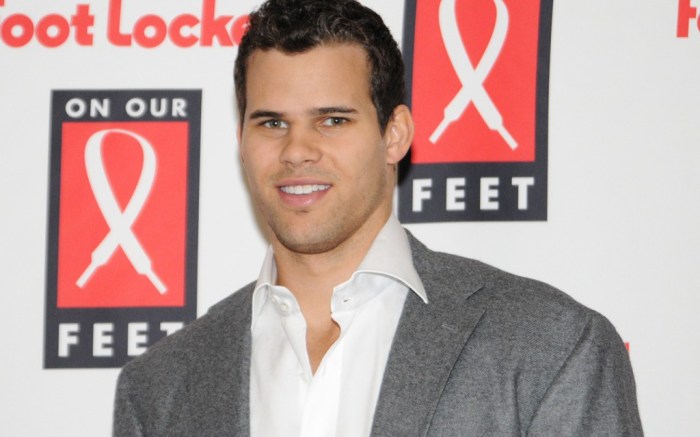 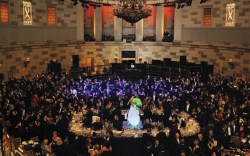 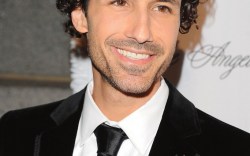 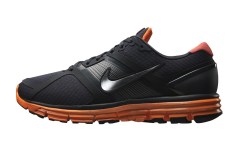 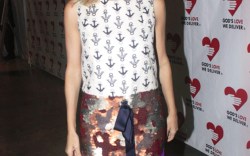 Sneaker Peek
Have Kim Kardashian’s fashion-loving ways rubbed off on her new mister? Spy caught up with Kris Humphries, the reality star’s husband of two months, at Foot Locker’s annual “On Our Feet” gala last week in New York to benefit the United Negro College Fund, where the 6’9″ power forward mingled with Foot Locker CEO Ken Hicks while modeling some YSL sneaks with a blazer and open-collared shirt. “I didn’t want to wear sneakers with a tuxedo,” Humphries said of his casual style. “I wanted something I could go out in afterward and not be embarrassed.” And those weren’t idle words: Humphries, kicks and all, was photographed out on the town with the missus later that evening. Also on hand was actor Jerry Ferrara, better known as sneaker enthusiast Turtle on HBO’s late, lamented “Entourage.” Ferrara claimed his sneaker-hording days are a thing of the past, even if he was representing in Nike Mr. Cartoon limited-edition kicks. “I have an image to uphold,” he said. “I would do a disservice to the character if I walked in not having it right.” So will we see him revisit Turtle on the big screen? “All I can share is that we fully intend on making [a film] happen,” he said. “It’s gonna take a lot of work and a lot of it’s going to come down to Doug Ellin just writing the script and HBO saying, ‘Go do it.'”

Mile Marker
Ready, set, run. TV personality Ethan Zohn is lacing up his shoes for his second try at the ING New York City Marathon next month. The co-host of ABC’s new show “Everyday Health,” and former winner of CBS’ “Survivor,” isn’t just running to beat last year’s time but to raise a lot of money for his charity: Grassroot Soccer. “We’re hoping to raise about $200,000 with all our runners combined,” he said. So what’s Zohn’s sneaker of choice for the big day? “I’m going with the Nike Lunarglides. For after I run, I’ve been putting on these Cushe sandals that are pretty awesome.” But Zohn won’t be the only familiar face at the start line on Nov. 6. West boutique owner Lester Wasserman also will be lacing up Lunarglides for the road race. “I trained for a long time in a pair of Saucony Kinvaras, and that shoe is awesome, but [for the length of the race], the Lunarglide is a little more substantial and has a little more cushioning.” Models Christy Turlington and Veronica Webb also are expected to run, along with actor Michael Williams of “Boardwalk Empire” and celeb chef Bobby Flay.

Inside Tory
Tory Burch doesn’t let a rainy day get her down. Despite stormy conditions in New York last week, the designer strutted in suede wedges with an embellished platform at the Golden Heart Awards celebration. “They are definitely bound to get ruined, but you just have to run with it,” said Burch, who was excited to catch up with Blaine Trump (sister-in-law of the Donald). “She’s a great friend and I admire her for what she does,” Burch said of Trump’s work for God’s Love We Deliver, the non-profit organization that hosted the awards to honor Carolina Herrera. But Burch isn’t always out on the town. The designer said she’s recently been getting into the TV show “Breaking Bad” and is looking forward to an upcoming holiday trip to Thailand and Burma with her children.

On the Tube
Kenneth Cole is heading to TV. The designer is following in Michael Kors’ footsteps, serving as a judge on “Project Accessory.” The new Lifetime show, which debuts Thursday, will pit 12 aspiring designers against each other for a cut-throat competition in accessory design. Molly Sims will host, and Debra Messing and Kelly Osborne are set to join Cole on the judges’ panel. … Also on the small screen, Tom Ford will debut his documentary “Visionaries: Tom Ford” on the Oprah Winfrey Network in June. Following the success of “A Single Man,” written and directed by Ford in 2009, this flick will get up close and personal in the designer’s professional life, including footage of Ford’s runway show in New York last year and the opening of his flagship in Beverly Hills, Calif.

Revolver Returns
Leslie Gallin has a new platform. The VP of footwear for Magic and FN Platform, and her husband, Ken Linzer, are partners in the relaunch of former West Hollywood hotspot Revolver. The club, which is slated to open later this month, originally rose to prominence in the 1980s and ’90s as the first video bar in the country. But will there be a signature Gallin drink on the menu? “Now that you mention it, there should be,” she said. “I’ll have to think of something good because I’m a plain-Jane, vodka-on-the-rocks girl. But maybe it should be something interesting, like a Blue Hawaiian.” Turning back to the footwear biz, Gallin said she’s working with West Hollywood Mayor John Duran for a footwear-specific shopping event called Shoes’ Night Out, inspired by the global Fashion’s Night Out series of parties. “There are just so many shoe retailers in Los Angeles that we could really use something like this,” she said.