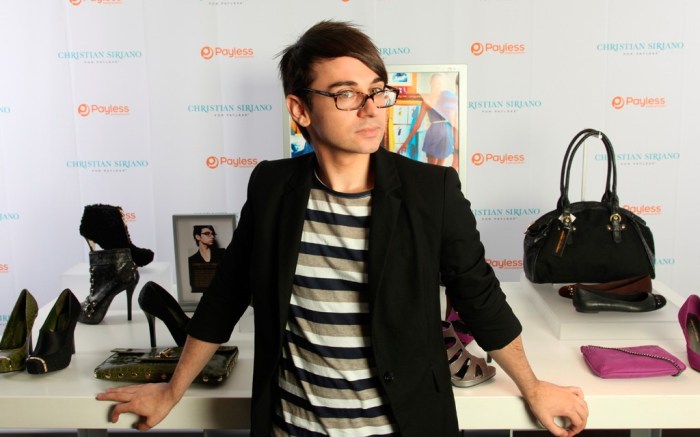 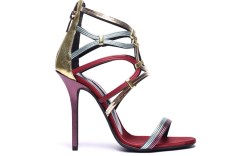 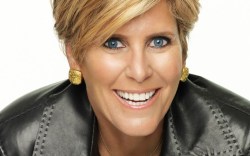 Pleasures of Paris
There’s nothing like a little R&R for Christian Siriano. The designer, who recently made an in-store appearance in New York, was fresh off a market research trip in Paris with the Payless team. He said the French city allows him to do something he rarely gets to do: kick back. “It feels like we can actually sit and relax in Paris,” he said. “We have lunch at a café for three hours, and I could never ever do that when I’m here working.” Siriano added that he’ll head overseas again later this month, so don’t expect an elaborate Halloween costume this year (think his infamous Ariel from “The Little Mermaid” getup). “My team and I are doing a fashion show in Barbados on Halloween, “ he said. “We’re going to think of some Halloween craziness to do, but I won’t be able to do my normal costume because it’s just too much work.”

New Heights
Famous for his vertiginous high heels, Diego Dolcini said his focus for spring and summer ’12 was to create many different opportunities for selling. While flats have already been a part of the collection, the designer introduced 70- and 90-mm mid-heels and wedges this season. “When you want to invest in something special, it’s not always the impossible glam things,” he said. “You need to be able to walk.” For spring, Dolcini worked with hand-painted python, passementerie and multi-colored Swarovski crystals. One sandal (pictured) used a basket-weaving technique, in which a pattern is laced together flat and then formed into the upper without stitching. And even after all of the hours spent crafting styles, Dolcini is still thrilled about the biz. “I love my work,” he said. “I love the shoes. It’s busy, but it’s my life.”

Footwear Dilemma
Financial advice guru Suze Orman spends her days helping Americans solve their money problems. But when Spy caught up with the popular TV personality last week, she was facing a dilemma of her own. Set to host this year’s Shoes on Sale gala, Orman admitted she was stressing out about what shoes to wear to the event. “It’s been driving me crazy,” she said. “I usually like to wear a simple black boot because I’m solid in it and I can walk fast and don’t have to worry about my heel getting caught [on stage]. But for this event, I thought, ‘Oh, my God, I can’t just wear my usual black boot in front of all of these shoe industry people.’” To win over the crowd, she is instead leaning toward a little bootie with a flirty open-toe design. “It’s a hot, hot shoe,” she said, without revealing the brand just yet.