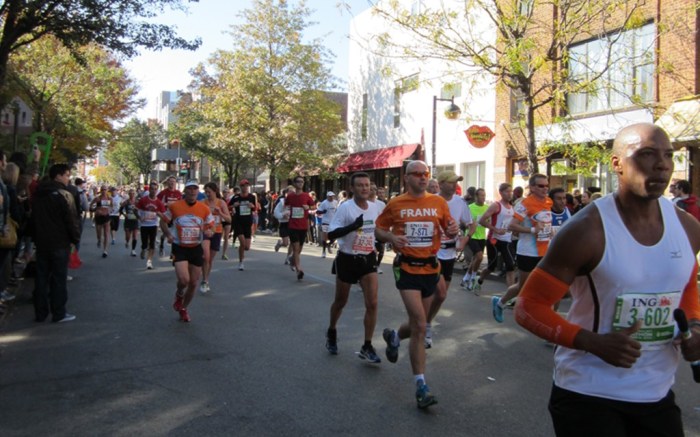 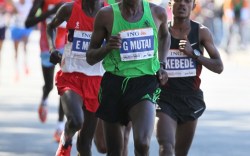 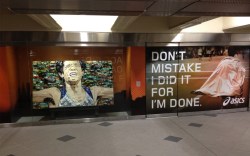 Game Changer
What shoes does it take to break a record? For Geoffrey Mutai of Kenya, it was the lightweight AdiZero Feather. Mutai was spotted running in a pair during the ING New York City Marathon on Sunday, when he broke the previous record for the course, with a time of 2:05:06 (the former record was set in 2001). Meanwhile, Meb Keflezighi was the first American finisher, coming in sixth place with a personal record of 2:09:13, while sporting his Skechers Go Run sneakers. And for the women, Firehiwot Dado of Ethiopia crossed the finish line with a first-place winning time of 2:23:15 wearing Nike’s Streak 3 shoes.

Locker Room
Foot Locker had a challenge of its own for race day. Five team members, from each borough of New York, were selected to run the marathon and in turn participate in a competition. For the first 13.1 miles, the participants ran together, until splitting off and racing to the finish. Michele Gonzalez from Staten Island clocked the fastest time of 3:46:49 and, as a result, won a Tiffany & Co. trophy and donated $1,000 to her charity of choice: Team Red, White & Blue, a non-profit that supports wounded veterans and families.

Race Pace
Picking the right shoes might be the most critical choice marathoners make before they take the bus to Staten Island, and it’s also one of the most personal. Spy spotted a wide range of options on the course that covered the gamut in terms of structure, cushioning and support. Brands included Adidas, Asics, Brooks, Converse Chuck Taylors, Ecco, Inov8, Invisible Shoes, Karhu, K-Swiss, Mizuno, New Balance, Newton, Nike, On Running, Puma, Reebok, Saucony, Salomon, Scott, Skechers, Vibram FiveFingers and Zoot. And at least one brave runner tackled the 26.2 miles of pavement in the bare minimum: his own two feet and nothing else.

Shoe Dog
West boutique owner Lester Wasserman — who finished the race in 4:13 — is feeling nothing but love after his first New York marathon. “I had a great time,” he said. But that isn’t to say it was easy. Despite the training, he said, “there’s a huge difference between running 21 [training] miles and 26.2,” he said. “But the crowd and the other people running, it’s sort of like a brotherhood. There’s a sense of camaraderie.” In short, he’s not hanging up his shoes just yet. “I’m ready to rock again next year.”

Racing Stripes
Even those who didn’t run the marathon Sunday had a chance to enter a race of their own. Asics, the marathon sponsor, transformed Columbus Circle with 17 visual displays, including a 60-foot video screen wall, with which runners could challenge a video of Ryan Hall at race pace — or at least run alongside it. The brand also built an art sculpture using race gear such as water bottles and gel packs.