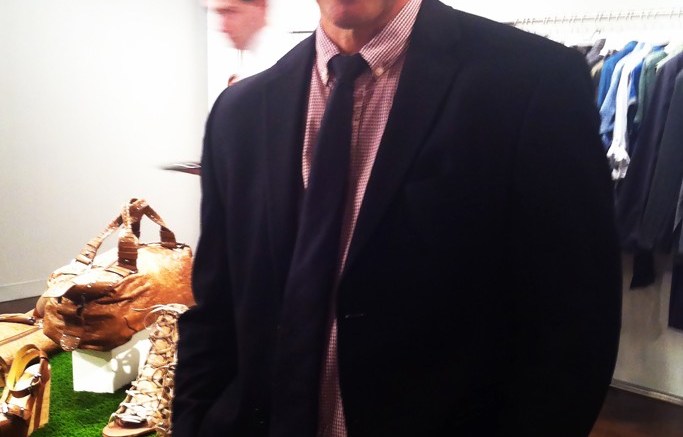 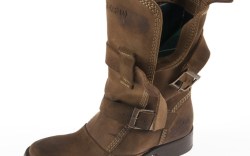 Sky High
Kenneth Cole and creative director Ingo Wilts looked locally for inspiration for the spring collection. The flats, pumps, wedges and updated gladiator sandals take a cue from the elevated High Line Park on Manhattan’s West Side. “Everyone likes to look at things from an elevated perspective — women have been telling us that for a long time,” Cole quipped during a cocktail party and preview on Tuesday. Wilts, who lives near the High Line, said he loves to take photos and get a feel for nature against the urban backdrop. The influence shows in the shoes’ architectural constructions and the range of colors from bold sunset red to nudes. “This was really about going back to our heritage,” Wilts said. “The High Line is so integrated with New York now, as we are as a brand.” At the preview, the footwear, apparel and accessories were displayed with faux grass and black geometric structures meant to mirror The High Line’s 10th Avenue Square. “It’s a cool time in fashion right now,” said Cole. “There’s a lot happening above and below the ankles.”

Superdry is super focused on footwear. The U.K.-based brand grew its collection by 50 percent this season, showing a mix of distressed leather boots, lace-up sneakers, mocs and brogues with neon soles. “We keep to our roots for inspiration,” USA President Michael Martens said at the brand’s press preview this week. “They’re classic English shoes with a twist.” The brand is also making footwear a focus in its retail locations, bowing a Santa Monica store this December. The space will house Superdry’s first dedicated footwear area and include both men’s and women’s styles. It will also set the tone for other locations, which are expected to undergo retrofitting. “Santa Monica not only has a fashion-forward domestic customer, but it also has a strong international tourist consumer base,” Martens said. So what can consumers look forward to for the grand opening? “As we did with the opening of our South Street Seaport store in New York City this summer, we will have a special shopping and media event,” he said. “And I suspect a few of Superdry’s celebrity friends might stop by and celebrate with us.”

Mentors were on the mind this week among women in the footwear industry. WIFI hosted an education and networking event at FN Platform headquarters on Wednesday, where chair of the event, Jennet Chow, founder and designer of Evolution Design Lab, said she was fortunate enough to have been chosen for Two Ten’s pilot mentoring program, where she was paired with Beverly Goldberg, VP of sales at Weyco Group. Chow added that Goldberg not only guided her career, but also helped her juggle business and family. “She sets an example for me by what she does,” Chow said. “We both have three kids so we have a lot in common. She told me to appreciate each and every moment you have with your kids [but also to] go for every [opportunity].” And designer Dana Davis said she still seeks guidance from her father, former head of 20th Century Fox Marvin Davis, even after his passing in 2004. “I know it sounds stupid but sometimes my boyfriend and I sit up at night and talk to him,” she said. “I still feel like he is guiding me along [saying] ‘follow your passion.’”