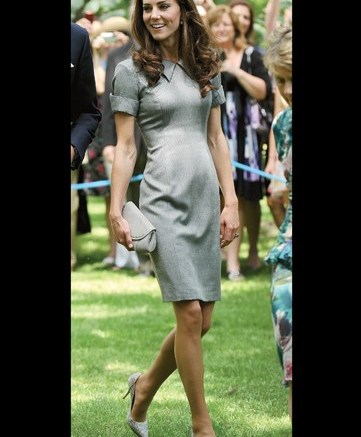 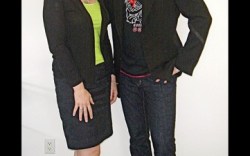 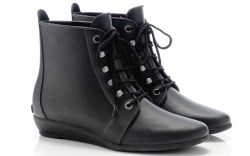 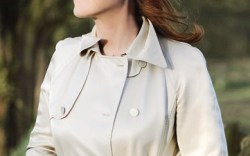 Royal Runway
Married life is treating The Duchess of Cambridge well, and it shows. On her whirlwind tour of Canada, Catherine’s footwear stepped up for the occasion. She was spotted in an array of designers during her short trip, from Manolo Blahnik’s navy Calogera pump to Tabitha Simmons’ Dela pump in cream and gray (at left). Blahnik told Spy he was very honored the Duchess chose to wear his shoes and that “she is always dressed impeccably and is always very elegant.” But the list of fashion picks doesn’t stop there. The Duchess also was seen in looks by both Sebago and Prada, and her California style made the front pages as well.

Fan Favorite
While Canada basked in the arrival of the Duke and Duchess of Cambridge, designer/retailer Ron White was thrilled by a sighting all his own. On the royal couple’s arrival day, the Canadian Prime Minister’s first lady, Laureen Harper, stepped out in an exclusive style that White appropriately titled the Canada Day Shoe (below). “We basically came to a place where we found some styles she was head-over-heels over, no pun intended,” White said of Harper, who he first started dressing last year. And it didn’t stop there. Harper was also spotted in a silver strappy dress sandal by the designer. “She said she can’t wear any other shoes anymore, and she only wants to wear mine,” said White. “That’s a huge honor.” But there could soon be an addition to White’s admirers. “Mrs. Harper is such a fan of my shoes I know Kate will be hearing about them soon.”

Shopping Spree
Designer Jessie Randall admits she has always been a “high-and-low shopper.” So what’s her secret to looking great without breaking the bank? Randall told Spy she frequents stores like Topshop and H&M for her outfits and then splurges on some nicer accessories. And aside from her personal shopping, Randall recently teamed up with another personal fav, Club Monaco, to launch Loeffler Randall lace-up rain booties. Always a fan of the store, Randall dished that she often pops into its Soho location, conveniently across the street from her office. “I love the clean, modern aesthetic,” she said.

Reality Check
Who knew Gilbert Harrison rubs elbows with royalty? The Financo chairman has known Sarah Ferguson, Duchess of York, for over 10 years after meeting through a mutual friend. Harrison made an unintended cameo on the Duchess’ reality TV show, “Finding Sarah” on OWN, when the pair coincidentally ran into each other at Gagosian art gallery in New York. “My wife and I walked in and [Sarah] was there with cameras and they started to shoot me,” Harrison said. Although he hasn’t yet seen himself on the show, Harrison’s cameo was noticed. A number of friends reached out after watching the episode, which aired last month. “What can I tell you, I’m a movie star,” he joked.