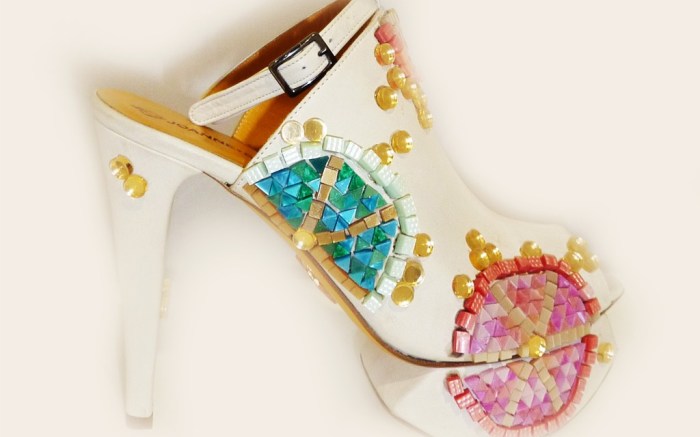 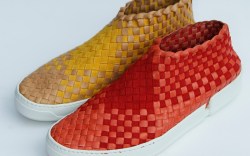 Globe Trotter
Travel aficionado Joanne Stoker finds inspiration in far-flung places. The British designer, now in her third season and new to the U.S. market, based her spring ’12 line on her recent trip to India, where she visited Mumbai and Calcutta. Now, her collection — which features a USB rechargeable light-up shoe — will be featured in an upcoming light installation at Selfridges in London to commemorate the first anniversary of the shoe salon there. And Stoker added that thanks to her travels, the age-old art form of mosaic tiling was also a large part of the brand’s spring styles. With the likes of Lady Gaga and Rihanna both requesting shoes, Stoker is already planning her next trip and collection. So how does a designer who’s busy building her brand manage to jet around the world? “I get mega-cheap deals,” she said.

Free Falling
For Edmundo Castillo, this spring is about finding himself. The designer said he’s coming into his own at the one-year mark of his relaunched namesake collection. “I’m staying true to myself,” Castillo said, surrounded by espadrille wedges, water-snake sandals and chic pumps at his press preview atop Morgans Hotel last week. “I’m [used to wearing] the hat of other brands, but I feel a great sense of freedom [with my own line],” said Castillo, who also designs shoes for Santoni and Castañer. Castillo added that he’s enjoyed reinterpreting the best men’s styles from his Casbia line for his spring women’s collection. His super-bright, laceless woven sneakers were all the buzz.

Dynamic Duo
Steve Madden will take a front row seat at New York Fashion Week. Alongside Paper magazine Editorial Director Mickey Boardman, Madden will be included in behind-the-scenes coverage, video footage and trend reports that will air on Taxi TV and in select Steve Madden stores this week. “Mr. Mickey and I rock the same hair style. Need I say more?” Madden quipped in a release.