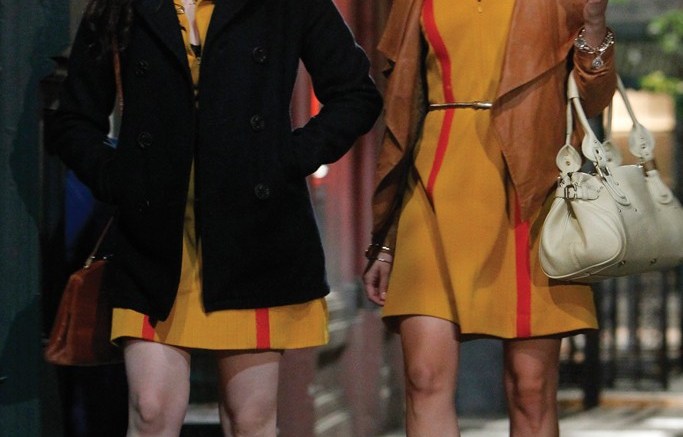 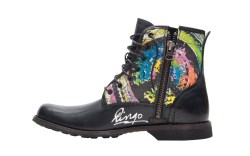 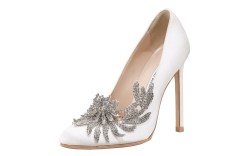 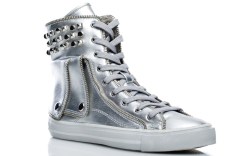 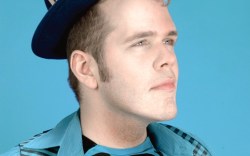 Frugal Friends
Trayce Gigi Field does her best to keep it real on the set of CBS’ “2 Broke Girls.” And that’s no easy task for the costume designer, challenged with finding economically appropriate footwear for the lead characters, who happen to be a little light on the green. “The shoe choices for the girls are based on their reality, and that’s important,” Field said. “Max (played by Kat Dennings) is poor, so all her shoes are economic choices. She wears nothing but vintage shoes she finds at thrift stores or Goodwill. With Caroline (Beth Behrs), most of her shoes are from her prior life, her rich life. She mostly wears Gucci, Christian Louboutin and Miu Miu.” And shoes even became a storyline for the sitcom when Caroline found a pair of Brian Atwood pumps in a thrift shop for $8. (Although, we have to say, Atwoods for $8, even in a thrift shop, seems more fiction than fact.) Nevertheless, Caroline better get used to buying used, according to Field. “She’s probably going to wear the same shoes for a while until she makes more money,” she said. “Her tastes are so refined, [and] I’m not sure we will ever see her in anything cheap.”

Perez Says
Perez Hilton likes to call himself a “sneaker-phene.” At the moment, the kicks-obsessed blogger said he is digging Creative Recreation. “I wore these limited-edition LED sneakers in the club,” he said. “Watching them light up is magical.” Now, Hilton is trying his hand at making shoes as the most recent guest designer to join the Shoedazzle.com roster. He crafted a unisex studded sneaker and a stiletto for the site (all proceeds will be donated to the Gay, Lesbian & Straight Education Network). “I’ve been wearing the sneaker a lot, and if I was a woman, I’d wear the stiletto, too,” he quipped. So what’s Hilton excited about outside the shoe world? The release of “Breaking Dawn,” of course. “I don’t think it’s groundbreaking or changing my life, but I expect to enjoy it like I enjoyed all the other [films],” he said. Meanwhile, Hilton also weighed in on potential candidates for Regis Philbin’s replacement on “Live.” “Howard Stern would be an interesting choice,” he said. “Having him balance Kelly Ripa would be awesome.”

Starr Struck
Ringo Starr is coming together with Timberland. The former Beatle, who has not signed a piece of memorabilia for more than three years, has agreed to deck out 75 pairs of men’s City Six-Inch Earthkeepers boots. The special-edition styles, which feature a colorful Starr-designed peace sign on the canvas panels, will be up for auction on eBay from Dec. 1 to Dec. 11. All proceeds will go to London-based nonprofit WaterAid, a charity dedicated to providing clean water, hygiene and sanitation to developing countries. It was the charitable aspect that clinched the partnership, according to the brand. “[WaterAid] is an organization that Ringo has supported in the past through his Lotus Foundation,” said Margaret Morey-Reuner, senior manager for values marketing at Timberland. “We picked WaterAid together [with Starr] because everyone understands it and its global significance. We have shared views in terms of the need to raise awareness for social and environmental justice plans.” The boots, for which bidding will start at $250, are the latest addition to Timberland’s “Canvas That Cares” program, which raises money for various nonprofit organizations.

Wedding March
Is Manolo Blahnik a Twihard? The designer, known for his love of movies, is having another major on-screen moment: He dreamed up the decadent wedding shoes for Bella Swan (played by Kristen Stewart) in “Breaking Dawn.” And according to Blahnik, seeing the film is first on his list of things to do while in New York this week to receive the Footwear News Lifetime Achievement Award. So how did he channel the character? Blahnik said he focused on creating the perfect pair of pumps to pair with Bella’s Carolina Herrera dress.

Spotted
Rihanna may have had a wardrobe misstep. The songstress reportedly offended some viewers last week when she appeared on the U.K. edition of “The X Factor.” Her shoes, which were a collaboration between designer Ashish Gupta and British brand Underground, were apparently too X-rated even for the show, due to the profanity included on the side. Jennifer Lopez, meanwhile, made more of a hit when she was spotted last week wearing Gio Diev boots on the American Music Awards stage at the Nokia Theatre in Los Angeles.

Tree Time
After five years creating a “Shoe Tree” in support of Meals on Wheels, Pedestrian Shops is going all out this holiday season. Owner Richard Polk is again participating in the Festival of Trees (to be held in downtown Boulder, Colo., for the first time). After the festival, Polk’s tree, which is trimmed with $4,000 worth of footwear, socks and handbags, will turn into a giving tree: 35 pairs of the shoes are set to be raffled off to one lucky customer. “Our vendors, including Clarks, Ugg and Dansko, have been so helpful in this giving process,” Polk said. “People care about what’s going on in their community, and seeing this tree in the store gets them involved in helping out a good cause.”