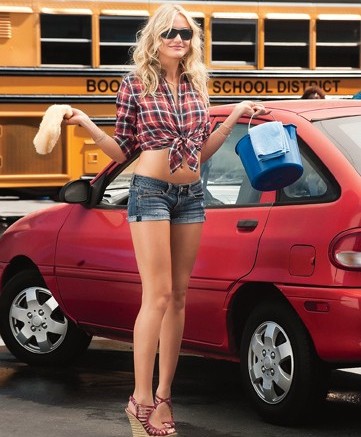 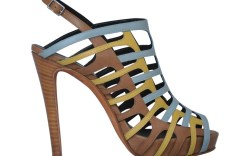 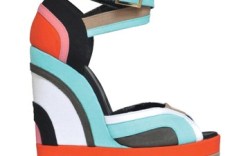 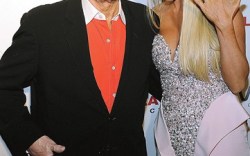 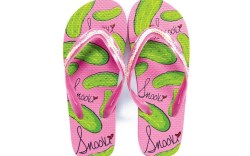 Teachers Pet
The footwear in “Bad Teacher” definitely gets a passing grade.

When it came to outfitting Elizabeth (Cameron Diaz), it was all about breaking the rules, McGuire said. The hard-partying teacher wears sexy Christian Louboutin heels, some up to 6 inches in height, throughout the film.

“Everything I did was going against the grain,” said McGuire. “I don’t know any teachers who could wear Louboutins to school or heels that high.”

Meanwhile, the male students, fellow teachers Russell (Jason Segal) and Scott (Justin Timberlake), all wore a variety of styles, including sneakers and boots by brands such as Vans and Converse. And the female students were dressed in pumps and flats.

“The footwear is as important as the jewelry or the handbags,” said McGuire. “[Shoes] add the last touch of character to a character, whether you see them [in the scene] or not.”

Here, Spy goes inside the classroom with McGuire.

What footwear looks did you focus on for the male characters?
“Justin wore Yohji Yamamoto for Adidas sneakers. And for his dress shoes, suede Red Wing wingtips I bought from Traffic in Los Angeles. He wore a pair of J. Lindeberg shoes as well. Jason was in a lot of Under Armour. He was a coach, [so] that was his main thing.”

For Diaz’s character, Elizabeth, did you match her footwear to her character’s outgoing and spunky personality?
“She was in couture from head to toe. It’s not something you’d probably ever see [in the classroom]. The shoes were sexy — that’s what the story is about. She’s a teacher who wants to marry a rich guy and get the hell out of there. All her accoutrement — her purses, handbags and shoes — were way beyond her means.”

What was your most memorable shoe scene?
“There’s a scene where Elizabeth is walking in the hall [on her first day] and the shot starts at her feet. The shoes were emphasized quite a bit. And in the car wash scene [at left] she was wearing a very high Steve Madden platform shoe with the cut-off jeans. I couldn’t find a wedge any higher.”

What influenced your shoe choices?
“Cameron personally owns a lot of Louboutins. When we did the fitting, I had brought some and she had some of her own. That’s when I decided they were perfect for her character. I knew they would be comfortable and that she could walk in a 6-inch heel. Some people can’t. The shoes influence the way you walk, the way you carry yourself, the way you express your character.”

Who was the most fun to dress?
“Every character is fun and interesting. The amazing thing about dressing Cameron is that she could put a paper bag on and wear it on the red carpet. She just has the ability to take anything and make magic out of it. It’s just the way she is. And then Justin’s character was super fun. His green corduroy Italian suit was just the most beautiful thing, with the red suede shoes and the plaid shirt. He was supposed to be this rich boy who was the opposite of Cameron. … He just wanted to be real. It was an interesting juxtaposition of characters.”

Pierre’s Paradise
Pierre Hardy tries not to mix business with pleasure. The designer told Spy he plans to travel to Capri, Italy, for some fun in the sun this summer, with both swimming and diving on his agenda. “I try not to think about [work], actually,” Hardy said while toasting his cruise collection on the rooftop of his New York shop last week. “But in the end, there is always something [inspiring] that pops up in different environments.” After his trip, though, Hardy said he plans to get back to focusing on work, specifically his spring ’12 line. “You have the pre-collection and then you have the [main event], and I try to make things more spectacular and more dramatic.”

Wedding Woes
Move over Kate Middleton. Just when Playboy founder Hugh Hefner thought he had taken over the wedding spotlight, his bride-to-be, Crystal Harris, decided to kick off her shoes and cancel the ceremony. But Hefner wasn’t the only one who was disappointed: the Playboy bunny had planned to wear Aruna Seth’s Aliah ballerina flats with a Swarovski crystal bow on the big day. “It would have been a lovely wedding, and her choice of shoes would have added to the fairy-tale theme,” the designer said. (Seth also was rumored to be designing the footwear for Middleton’s big day, but instead sister Pippa donned a look at the reception.) So who will Seth dress next? Maybe Hefner will find a new bride to hop down the aisle.

Shore Style
There’s no stopping Snooki. The bronzed star is boosting her footwear cred yet again, but this time with her own flip-flops. The “Jersey Shore” housemate (who is currently filming the show’s latest season in Italy) will launch a line of graphic flip-flops and fashion sandals called “Snooki by Nicole Polizzi” with MeyeWorld LLC. The collection, which features a variety of leopard-print and studded styles — and, of course, a pickle pattern — is set to hit stores for holiday ’11. “Everyone who knows Snooki knows her love for pickles,” said Mary Miraldi, MeyeWorld design director. Snooki also produces a line of slippers with Happy Feet that debuted last spring.