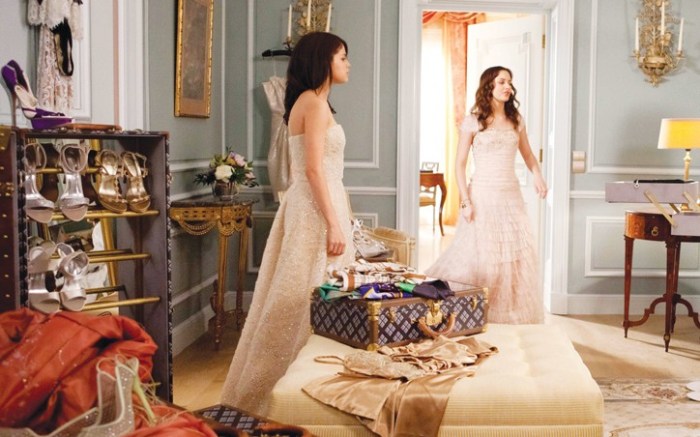 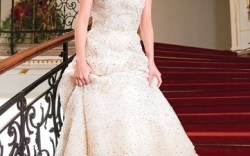 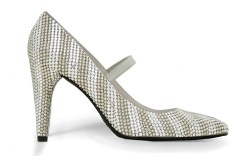 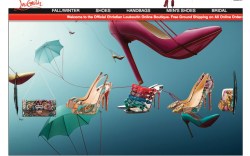 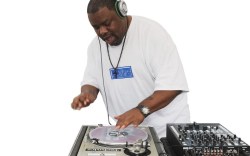 Three’s Company
A dream trip to Paris turns out to be a big disappointment in “Monte Carlo,” but costume designer Shay Cunliffe made sure the footwear was anything but. And while the film, which hit the big screen Friday, has looks inspired by vintage fashion magazines and classic romantic movies, Cunliffe said she aimed to give each character individual fashion cred.

Carefree Emma (Katie Cassidy) and conservative Meg (Leighton Meester), for example, often differed in their footwear choices. “[Emma wore] a lot of frivolous, excessively high-heeled choices, very impractical for a traveler,” said Cunliffe, adding that Aldo was a standout brand. “[For Meg], we made sure she traveled in absolutely flat shoes because the most sensible traveler would do that.” Some of the looks included Gucci sandals and ballerinas by Repetto.

Rounding out the trio is tomboy Grace (Selena Gomez), who is mistaken for a British heiress in the film and goes along with the mistaken identity. She donned everything from practical to pricey looks, including a pair of vintage cowboy boots the designer found at a flea market in Hungary and Christian Louboutin black patent stilettos.

Here, Spy goes behind the scenes with Cunliffe.

How did you make sure Grace’s footwear was suitable for royalty?
“For the first scene, [where she steps out pretending to be the heiress], we chose Louboutin because it’s such a recognizable and envied [brand] by everyone, and that red sole instantly tells you it’s a very high-end shoe. I put her in a beautiful Stella McCartney sandal when she had to go to the beach. [But] when she’s playing the girl with no money, she’s in her scuffed-up cowboy boots with every [outfit]. I didn’t need to work too hard [to get] the rich girl [look]. I already had my huge contrast.”

What was the most memorable footwear scene?
“When the luggage is opened and the camera pans over the footwear. About half the shoes are Christian Dior.”

Did you face any challenges while selecting the shoes?
“The challenge is making the shoe stylish and look right for the character, but also [making sure] it works extremely well for the action they have to do in that shoe. With Cassidy, the big gag was that she was [running around] in stilettos. The only resolution for that was [to have her take them off] and go barefoot.”

Single Ladies
Who needs rings when you have shoes? Beyoncé paired her bling with a pair of sparkling Stuart Weitzman pumps for her return to the concert stage in Nice, France, last month. “She knows exactly what she wants,” said Weitzman, who has worked with the star’s team before. “And you can count on her outfits not covering her shoes.” The Ventipave style, covered in silver Swarovski crystals, was customized to fit the pop sensation and meet her on-stage dancing demands by adding a Mary Jane strap. The pumps will soon be available at Stuart Weitzman in Beverly Hills, Calif., but the designer said he’s just honored Beyoncé wanted to slip into the $2,500 pair. “It’s not a [business push],” he said, “but rather a personal sense of satisfaction, knowing she can have any shoe in the world, yet seems to give us the first shot.”

Sole King
Apparently, Christian Louboutin is a hit with all ages. Sales specialists at the brand told Spy the designer’s e-commerce site, which will celebrate its one-year anniversary this week, often gets interesting requests, including one from a client who wanted to purchase shoes for her daughter’s second birthday. Unfortunately, the red sole doesn’t come in pint sizes. Meanwhile, a Michael Jackson fanatic asked the brand to create a tribute heel reminiscent of the shoes in the “Bad” video. No such luck. But the brand does plan to launch an e-commerce site in Canada later this month, opening up a whole new platform for fans to make special — and sometimes strange — requests.

Rockin’ Out
Steve Madden isn’t shy about his expectations for his newest Madden Music name: British vocalist Katy B. “Take lots of pictures because next time you see her, she’s going to have all these massive, 300-pound [bodyguards] around her,” Madden said at his summer concert series event at The Standard Hotel in New York. For her part, the songstress said she was excited about venturing to the Big Apple for the first time. “I did a lot of shopping today,” she told Spy. She also revealed her biggest musical influences, including Destiny’s Child, Mary J. Blige and Faith Evans. So who is up next on Madden’s summer set list? Be on the lookout for another British artist, Eliza Doolittle, followed by Indie band Funeral Party and rock musician Nicole Atkins. “We are sort of a gateway drug for pop stars,” said Madden.

Super Stars
The FN Shoe Star cast is moving on up. After finishing the webisode series last month, runner-up Keena Fleming landed a job at Vince Camuto as an assistant designer for the Max Azria and VC signature brands. “I was recruited instantly, instead of [going through] the usual graduating and hunting for a job and then accepting whatever comes your way because you’re desperate and broke,” joked Fleming. And Maggie Kervick, who was eliminated in the first challenge, also found a high-profile gig as an assistant designer at Kenneth Cole Reaction. The FIT grad said she’s already enjoying the daily grind. “I am very excited to finally be out of school and in the real world,” she said, adding that certain Shoe Star moments still provide a good laugh. “Having cameras follow us at [New York] Fashion Week was hilarious because people kept taking our photos even though we were obviously not famous.”

Good Rap
DJ and rapper Biz Markie of “Just a Friend” fame has acquired quite a collection of kicks over the years. “I lost count at 5,600,” he said. To feed his obsession, Markie worked with Pro-Keds on a limited-edition 69er sneaker. And to fête the launch, Markie recently hit Packer Shoes in New Jersey, where fans came out to celebrate at a barbecue. “Biz has been shopping our store since way back,” said Packer Shoes owner Mike Packer. “It’s good he can come here and mingle with customers. It’s like being with family.”