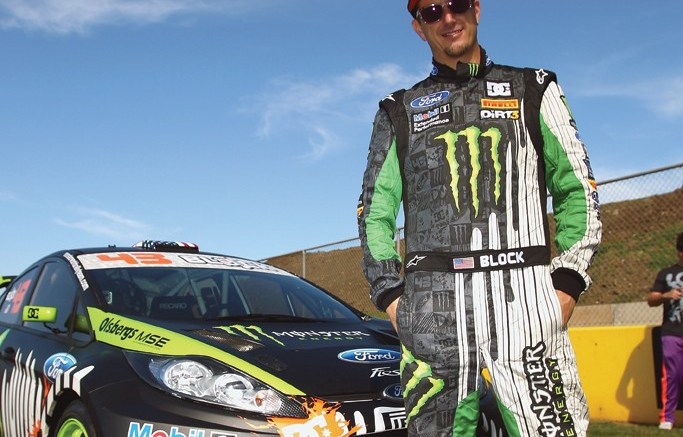 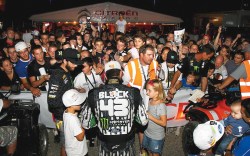 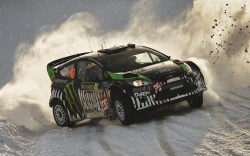 Ken Block may have founded the skate and action-sports brand DC Shoes, but these days he’s not behind a desk — he’s behind the wheel.

Block, 44, is the chief brand officer for Huntington Beach, Calif.-based DC Shoes, the company he started in 1993 with friend Damon Way. Responsible since the early days for promoting DC, today Block continues to build the brand and make a name for it. And that mission is increasingly tied to his passion for professional rally driving and the jaw-dropping stunt-driving technique called gymkhana that he’s almost singlehandedly elevated into a phenomenon.

A lifelong “car guy” and motorsports fan, Block told Footwear News that pursuing his interests was nothing more than a passing fancy until 2004, when DC Shoes sold to action-sports brand Quiksilver for $87 million.

“I had a little extra time and money, so I thought I’d go out and learn how to drive a rally car,” he said.

But Block quickly progressed past the beginner stage in the sport, which features drivers racing street-legal, but heavily modified, cars on point-to-point courses.

By 2005, Block was good enough to earn a spot on a professional team. He wasn’t sponsored and he paid his own way, but during the course of the year he racked up five top-five finishes and placed fourth overall in the Rally America national championship. He was so successful, in fact, that he was named Rally America’s Rookie of the Year and soon started fielding offers for sponsorship deals. Since then, Block has won multiple medals at the

X Games and garnered top-five finishes in races across the world. And his rally success paved the way for similar triumphs in a related sport that’s paid off big for DC.

While looking to polish his rally skills, Block discovered gymkhana, an autocross-esque sport that times drivers as they race across a predetermined obstacle course. The focus is on drifting, reversals and other precision driving skills.

“I was always looking for ways to get extra seat time,” Block said. “The more time you can get in, the better, and with rally being so expensive, I never got so much time between events.”

Block’s affinity for and skill in gymkhana has turned into big business — and major exposure — for DC Shoes. Block started recording his laps to look for ways to improve, but the videos soon gave him another idea about boosting online attention for DC.

In 2008, the brand launched the gymkhana series of videos, which feature Block’s stunt driving in an increasingly high-stakes — and high-concept — course. The culmination of the project came in August, when “Gymkhana IV: The Hollywood Megamerical” debuted online and started attracting attention. (The clip shot straight to the top of Advertising Age’s Viral Video list in its first week with more than 5 million views.) Hosted on DC’s YouTube channel and website — and giving lots of love to the brand’s logo and auto-specific shoes and apparel — the video now has more than 12.8 million views on YouTube alone, while the series as a whole has more than 93 million plays. That attention has paid off, Block said, in added sales for DC.

The series’ triumph, he explained, also has changed the way DC thinks about its marketing. With traditional print campaigns or television ads, Block said, “you don’t have direct feedback. You’re paying for placement. That’s how today’s age has really changed: If a footwear company puts its [ad] on YouTube, you can see a success rate, whether it’s working. It’s a huge paradigm shift — and an interesting one. You can see the success in the numbers.”

Going forward, Block, who admitted that the success of his rally career and the gymkhana series has meant cutting back on the time he spends directly overseeing DC, is working on the next edition of the videos.

“It’s a great formula. We’ll keep pushing the envelope on what works and doesn’t work, marketingwise,” he said. “We’ll expand and explore with the car and with marketing.”