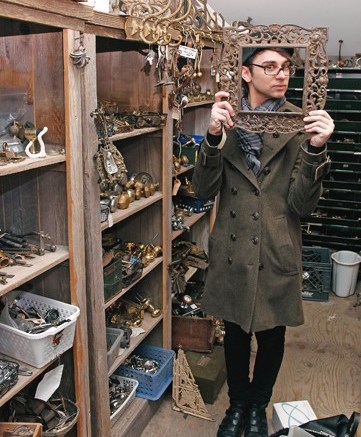 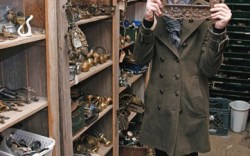 When looking for creative inspiration — or a simple weekend getaway — 25-year-old Siriano frequently finds pleasure in scouring antique shops. Recently, the designer took Footwear News along as he searched for inspiration at Olde Good Things, a personal favorite in his Chelsea neighborhood in New York.

“I love that you never know what you’re going to find,” said Siriano. “You see the same thing over and over again [in other types of stores], so it’s nice to see something different.”

Siriano, best known for winning the fourth season of “Project Runway” in 2008, is keeping busy with upcoming projects including the expansion of his Payless line. And he said many styles are inspired by his shopping trips.

For example, Siriano’s Rocaille shoe from his fall ’10 Payless runway collection was influenced by antique furniture, with a signature heel that resembles a claw foot. And the peep-toe platform Cabriole, also from the fall ’10 runway line, featured a “gold filigree heel treatment.”

At Olde Good Things, Siriano browsed the selection of collectibles — ranging from doorknobs and antlers to lamps and chairs — and eventually stopped in front of several mirrors in a variety of patterns.

“I like to get inspired by anything, [even] if it’s something random,” he said. “These square mirrors are gorgeous and it’s a great print, so I would [create something similar] in a satin organza.”

Siriano first discovered the antique collecting scene two years ago while visiting friend and actress Kristen Johnston in Salisbury, Conn. Johnston suggested they browse the local stores, and the passion for vintage began.

Now Siriano often finds time on the weekends to shop with his boyfriend and has transformed his apartment into “a bit of an 18th-century French feel.” Among his favorite pieces are gold linen chairs that he bought in San Francisco.

Siriano now visits antique stores across the country, and one of his top shopping spots is Pom Pom in Los Angeles. “It has a mixture of reproductions and antique furniture, accessories and a ton of inspiration,” he said.

On a recent search, Siriano said he was fascinated by vintage tortoise sunglasses, which sparked an idea for footwear. “I love tortoise for heels, paired with different moldings. It could be cool,” he said.

That inspiration will come in handy as Siriano continues to expand his collection with Payless. Plans are in the works to roll out the line to almost 2,400 doors later this year, up from a few hundred now. His fall and holiday product will hit stores in September, and he is now working on the spring ’12 line.

The designer also is entertaining the idea of launching a higher-priced shoe line under his own label. He has already tested select styles on the runway and shown in Paris. Siriano said that he would initially target a few stores, and if the response is strong would plan for a major launch.

Also in the works is his first branded store, which Siriano said ideally would open in New York’s Soho area within the next year. “We’ll have everything — shoes and accessories,” he said. “It’s still early, but it’s definitely in the mix.”

And because Siriano is always plotting his next move, he’ll be on his way to upstate New York at the end of the month for more inspirational shopping.