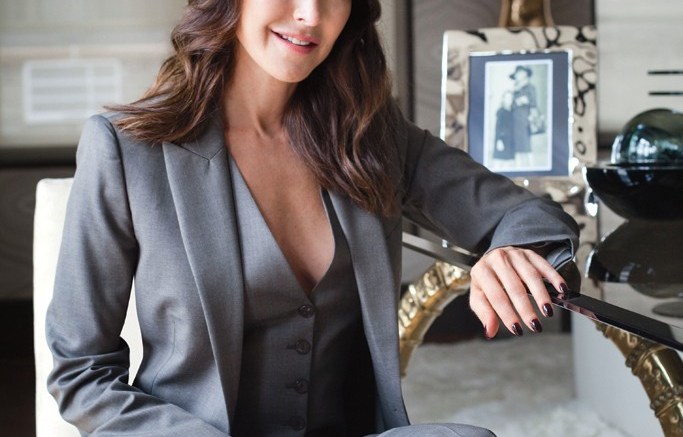 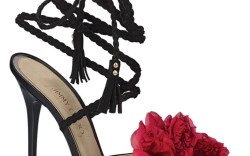 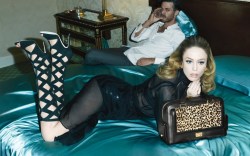 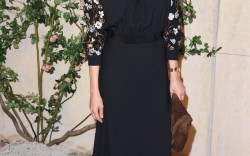 On a Thursday afternoon in late July, Tamara Mellon is relishing a rare moment of quiet in her glamorous penthouse apartment on Manhattan’s Upper East Side.

The Jimmy Choo founder and chief creative officer is resting on the plush white sofa in her expansive living room, which is a carefully executed combination of modern and traditional décor with a splash of 1970s pizzazz.

Eye-catching art and unique furniture pieces define the space, especially a glass-topped desk anchored by curved golden ram’s horns, which is a major focal point. Intimate personal touches are interspersed throughout, such as a selection of Jimmy Choo heels displayed prominently on the book shelf in Lucite cases.

“I started decorating with [interior designer] Martyn [Lawrence-Bullard] two years ago, and he really brought out my voice,” said Mellon, who openly admits that she longs for more time at home. (The fashion exec moved to New York in 2009 so that her daughter, Minty, could be closer to her father, banking heir Matthew Mellon, and his family.)

“[Home] is really the most unusual place for me to be,” said the 44-year-old, as she rattles off her August vacation plans to the Hamptons in New York and St. Tropez, France.

It’s been a particularly frenetic few months for Mellon, who said she feels “very relieved” following Jimmy Choo’s sale to Labelux Group GmbH in late May. The deal marks a new beginning for the 15-year-old brand, which had been controlled by private-equity owners for the past decade.

“I might have broken a record for how many private equity deals we’ve gone through. … I don’t think the business could have survived another one. It couldn’t sustain that kind of pace again,” Mellon said.

“This is a very different [acquisition] for us,” she added. “Labelux has a long-term vision. That’s why I like them as partners. And they aren’t too big, so we won’t get lost in their stable.”

Before Labelux ultimately sealed the deal ­— in a transaction reportedly valued at more than $850 million — several high-profile fashion players, including The Jones Group Inc., were said to be courting Jimmy Choo.

Mellon described the process as being incredibly stressful. “Going through these deals, everybody gets tense and it’s all consuming,” she admitted. “It takes your focus off the business.”

But throughout the negotiations, one thing was clear: Mellon’s role in the brand, both now and in the future, was extremely crucial.

“None of the bidders would buy the company without me. And I’m very committed,” she said, adding that Jimmy Choo has enormous potential. “We’re only a teenager. It takes about 30 years for a luxury brand to really hit maturity.”

“Labelux [is ready] to make some very good investments in the business,” said Mellon.

For now, though, while the dust is still settling on the deal, Mellon said she is looking forward to crafting a strategy with Reinhard Mieck, the CEO of Labelux, who told Footwear News earlier this summer that he doesn’t see “any limits” with Jimmy Choo.

And Mellon has been busy breaking into fresh territory in the past year, expanding into two new high-profile categories: fragrance and men’s footwear.

“Launching men’s has been an interesting process because a lot of people had a psychological block about Jimmy Choo men’s shoes. I would get jokes like, ‘What are you going to do, a men’s shoe with a high heel?’ They couldn’t quite wrap their heads around it. But when they saw the product, they [changed their minds].”

So how has the brand captured the attention of the male consumer? “They want comfort, quality, something that has a little edge. But they don’t want to look like fashion victims,” said Mellon.

She noted that the expansion into men’s is part of the brand’s natural evolution. “We have such a distinct identity, so our creative vision is now really being accepted across all different products very easily,” she said.

Case in point: “We make all our own clothes for our ad campaigns, and we have people ringing up asking, ‘Where can I get that dress?’ So there’s sort of a pent-up demand already.”

In addition to ready-to-wear, Mellon’s wish list for Jimmy Choo also includes home, jewelry, watches and swimwear. Still, she stressed, “we’re not going to rush into anything. We’re going to continue to be measured and disciplined in how we do it all.”

That calculated approach also meshes well with Labelux’s strategy, according to Mellon.

“They don’t have to show a return on investment [the same way private equity firms do]. They’re really focused on being brand-builders,” she said.

Mellon, who is herself the quintessential brand builder, is marking Jimmy Choo’s 15-year milestone with a series of initiatives, including Icons, a new capsule collection that debuted in June and features 15 styles from the archives. Some are the original looks, while others have been updated.

“I have so many favorites from over the years, and all the ones we chose have very special memories,” Mellon said. Among the standouts is the Feather, which the executive described as quirky and fun. (Sarah Jessica Parker famously lost the shoe in an episode of “Sex and the City.”)

Mellon is using the special collection to draw attention to one of her other passions: women’s rights. Ten percent of the net sales from the Icons collection will be donated to the new Jimmy Choo Foundation, which she created in support of the cause earlier this year.

“I’m going to be working on issues such as sexism, pay equality, domestic violence and the sex slave trade,” said Mellon. “If a woman like me doesn’t step up and voice things, who’s going to do it?”

The entrepreneur will have a major platform to raise awareness of the issues as she continues to expand the brand globally.

One particular source of excitement is the red-hot Chinese market.

“Everyone wants a slice of it,” said Mellon, who will visit China this month as part of her duties as an official U.K. business ambassador. “When you look at a map and see all the cities where you could have a retail store, it’s incredible,” she said.

In a separate interview, Schulman added: “Over time, Jimmy Choo can have a presence in Asia commensurate with our presence in the West,” he explained, pointing to two key retail openings in the China region this year, in Hong Kong’s Pacific Place and in Nanjing in the mainland.

In addition to other expansion markets, such as Japan, Mellon and Schulman also continue to find opportunity in the U.S. market, where the brand has rebounded strongly since the recession.

Last month, the label opened three stores, including a unit on New York’s Bleecker Street, a store at Crystals at City Center in Las Vegas and a location in the Beverly Center in Los Angeles.

All told, the company will have 125 doors globally by year’s end.

Reflecting on the brand today, Mellon said, “[Fifteen years has] gone by so quickly. As I get older, I look at the beginning, and think, ‘Oh, my God! I was so young when I started this business. How did I do that?’ I look at girls in their late 20s now, and they look so young.”

Now a seasoned designer and businesswoman, Mellon said she could potentially become involved in future acquisitions at Labelux, which is actively pursuing more deals.

But would she ever consider launching another brand?

“It’s funny, someone else asked me that this morning,” she said. “I’m not sure why that idea seems to be cropping up now. But you never know what the future holds.”

Lessons from her late father:
“He always said, ‘Don’t let accountants run your business’ and ‘lawyers always ruin deals.’ He also told me simple things like, ‘Always have more money coming in than you have going out.’ We should probably tell the U.S. government that right now.”

Venturing into children’s shoes:
“[My daughter] Minty won’t let me [make kids’ shoes]. I thought she would be really excited, but she said, ‘I want to be special. There can’t be kids’ shoes.’ So I guess that one’s off the table. Minty rules.”

Hollywood muses:
“There are so many, but I love Lauren Hutton. She was amazing in ‘American Gigolo.’ And Michelle Pfieffer in ‘Scarface.’ In terms of fashion influences, I always seem to go back to those two.”

Summering in the Hamptons:
“I’m still discovering it. I’m renting a house in Water Mill, N.Y. I just put myself in the middle until I figure out whether I want to be in Southampton or East Hampton, or wherever. It seems like there’s a lot of activity this summer. But driving around, you still see a lot of for-sale signs.”

Her favorite New York haunts:
“I don’t go out much. When I’m in town, I tend to go to my local restaurant around the corner. But I love The Lion, and Minetta Tavern is great. The Waverly Inn is always one of my favorites.”

What she misses most about London:
“My girlfriends. They’ve been my friends for 25 years, and when you have that kind of history, it’s a very different kind of relationship. But I love New York, and there are great people here.”

A recent inspiration trip to Los Angeles:
“We did a lot of vintage shopping, but not in expensive places, more in flea markets. The Rose Bowl is great. We like discovering a treasure hidden in the rubbish. We always seem to find great things in Los Angeles.”

Princess Kate:
“She’s the best thing that has happened to Britain since Princess Diana. She has so much elegance and grace, and she brings the [youth factor]. She was pitch perfect in that wedding dress. Kate and William are a modern couple and they’re great ambassadors for Britain.”

Emerging talent:
“I’m a big fan of Alexander Wang. I love Christopher Kane. There’s always great emerging talent. The Council of Fashion Designers of America does a good job of supporting young talent here in New York. It’s harder for designers to get financing [in the U.K.].

Favorite stores:
“I don’t go out shopping. I buy everything online. It’s the time factor. You can buy something quickly and have it delivered to your door that afternoon. [It’s easy to see] why the Internet business is on fire. [My favorites] are Net-a-porter.com and Luisaviaroma.com. And my vintage place, but I’m going to [keep that one a secret].”

Advice for young designers:
“Work in as many different parts of the industry [as possible] so you can gain experience. Find mentors and people to support you.”

The fashion cycle:
“There needs to be a shift. It either needs to get faster or more private. By the time you can buy something — six months after it’s on the runway — you’re bored of it. Another big problem for designers is that [consumers want exclusivity]. If too many people in US Weekly are already wearing the dress you want, you’re not going to buy it.”