Scoops From the NY Runways 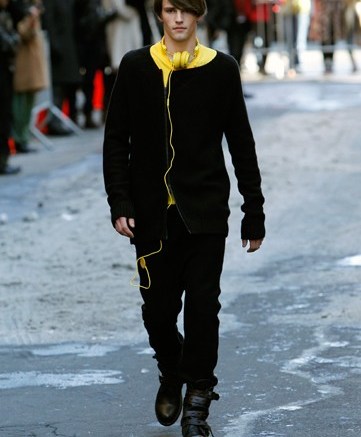 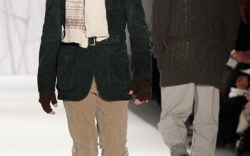 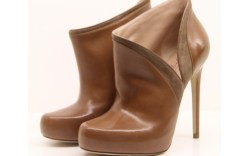 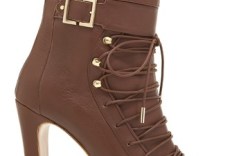 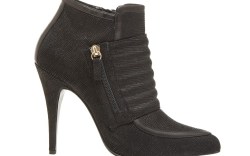 Vintage Vibe
Perry Ellis, Andrew Buckler, Nicholas K, Hyden Yoo and Jose Duran all gave U.S.-made footwear the fashion nod this season, sending male and female models down the runway in classic looks from newbie resource Vintage Shoe Co. With vintage-inspired detailing and traditional silhouettes, the brand’s mix of over-the-ankle lace-up styles, lace-less oxfords and engineer boots all seemed as if they were plucked right off the shelves of a second-hand shop. British menswear designer Andrew Buckler put his spin on an oxford and jump boot, redefining the silhouettes with bent toe shapes for a lived-in look. The special-edition styles will be available at Buckler’s stores in September.

All About Alejandro
Alejandro Ingelmo hosted a preview of his newest collection at his Mercer Street store during Fashion Week. The line features softer silhouettes, origami folding, a darker shade of the designer’s signature nude patent flat boots and ballerina slip-ons. Ingelmo said he was “thinking about the shoe from a different perspective for fall. “I wanted to think outside the box, outside the last,” he said. “Breaking the pattern created a whole new world [for me].” Ingelmo explored origami techniques, even learning to manipulate leather and work with large pieces to make stitch-free insteps on ankle and mid-calf boots. Ingelmo jokingly called a directional asymmetrical ankle boot in caramel leather style “my baby.” For men, the signature Tron sneaker was updated with matte satin panels, creating a tuxedo effect with the same black-on-black detailing Ingelmo often uses across his collections.

Courting Castana
Natalia Barbieri, co-founder of British footwear label Bionda Castana, was in town during Fashion Week for shows and appointments but took time out to give Footwear News a peek at the fall ’11 collection. Barbieri, along with partner Jennifer Portman, is also finishing a short film that will launch in April. A new logo, in which the letter Ns are heels, and a new website are also in the works, although Barbieri said it won’t yet feature e-commerce. “I’d like to launch e-commerce at the same time as opening our first store,” she said. “We’re moving in the right direction for the growth of our collection, and as we increase wholesale accounts, it could be as soon as the end of next year. I presume we would open in London first, but let’s see what happens.” The new collection consists of the brand’s signature feminine pumps and booties, but also biker boots, pointy toe flats and wedge boots. Bionda Castana’s clean-lined ankle boots and velvet pumps with stacked wooden heel will also be shown at Premiere Classe, and then at a showroom alongside fellow Brit shoe designer Michael Lewis and Los Angeles-based LD Tuttle.

Charlotte’s Web
Charlotte Dellal, the British designer behind Charlotte Olympia, launched her spring ’11 collection at Bergdorf Goodman on Feb. 15. “I’ve always wanted to be in Bergdorf,” Dellal said. “I love the store, the salon, the whole essence of it. My shoes needed to be here.” Back in London next week, Dellal will host a preview of her fall ’11 collection on Feb. 22 during London Fashion Week. The designer chose a gentlemen’s club in Mayfair for the event and plans to transform the upper level into a viewing room for a short film called “To Die For,” created especially for the evening by London-based director Jam. “It’s an Agatha Christie-style murder mystery set in the 1920s [and] 1930s featuring lots of beautiful accessories,” Dellal said.