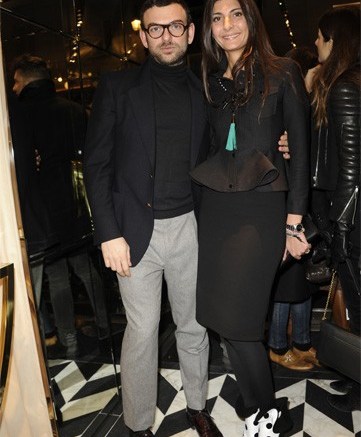 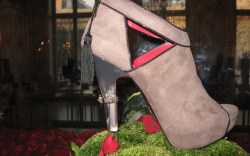 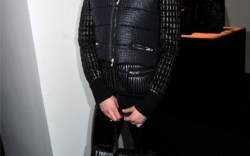 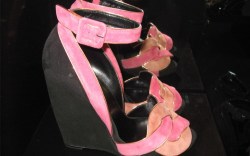 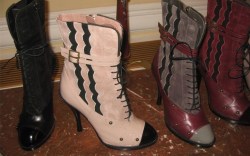 Opening Day
Sergio Rossi rolled out a new store concept with its new Rue du Faubourg Saint-Honoré location in Paris. At the opening party on March 4, designer Francesco Russo gestured to the back room, calling it the boudoir section, where you “try [shoes] on, feel them, fall in love with them.” As for his fall ’11 collection for the brand, Russo said that his favorite style was the Robert Mapplethorpe-inspired calla lily boot in black and white polka dots.

Of The Essence
Cesare Paciotti launched its first fragrance, Essence, at the brand’s Paris preview on March 5. For the launch, the brand created a special bottle encased in the heel of a shoe. The designer presented a 1970s-inspired collection for fall with Bianca Jagger as the muse. Highlights included the rust, teal and caramel color palette and all-over furry boots.

Black and White
In the second season of Hogan’s collaboration with Karl Lagerfeld, accessories are particularly key. Rubber-heeled oxfords and sneakers in Lagerfeld’s iconic black and white make up the footwear offering, alongside puffer coats and quilted tote bags. The Kaiser also called on some of his favorite models and muses to star in a short film and ad campaign, shot in black and white and displayed around Paris during fashion week. On the exclusive list were Lou Doillon, Elettra Wiedemann, Elisa Sednaoui, Leigh Lezark and Shu Pei.

Hardy Boy
Designer Pierre Hardy unveiled graphic color blocking, platform wedges, a new pointy-toe last and an updated cubic print as his key styles for fall ’11. “I was working with more fluidity and softness with round shapes,” Hardy said. “I wanted the feeling of being surrounded, like a cocoon.” Playing with mixed materials was another trend at the designer’s showroom, with one standout bootie featuring swatches of snakeskin, suede, and treated leather for the effect of layered pieces of tape. A lower mid-heel boot and an expansion of the growing casual collection were other highlights from the designer, who also showed plenty of glamorous evening styles.

Tabitha’s Treats
Highlights at Tabitha Simmons’ Paris preview at the Crillon on March 5 included a bordeaux-colored mid-calf ankle boot deemed the “collage boot” for it’s mixed materials and applique details, as well as a silk bootie with multi-colored tassel at the rear closure. “I was inspired by furniture fabrics and curtain tassels, as well as Victoriana and hook and eye closures,” Simmons said. For evening, a chandelier-jeweled sandal with a grosgrain bow featured a rear zip. Of her designs, she added, “They’re expensive, but they last and these styles can be pulled out years later and always feel a part of ‘the season.’”

Mystery Woman
Ever tongue-in-cheek, Charlotte Dellal’s latest collection, dubbed “Evil Under The Sun,” was inspired by Agatha Christie murder mysteries for their a combination of “sensuality, femininity and intrigue.” The fall ’11 Charlotte Olympia line debuted smoking slippers, and the designer added her own twist: embroidered cat ears and face. Dellal also presented a short film produced by fashion photographer Jam and featuring British model Portia Freeman that was unveiled during London Fashion Week and is now showing exclusively on style.com. A collaboration with milliner Victoria Grant is also new for fall and includes a “Charlotte’s Web”-inspired beret and a red fishnet number with clip-on felt lips that may also be worn as shoe clips.

Kirkwood Craze
Nicholas Kirkwood continued his expansion into daywear for fall adding flat boots, mid heights and “a pointier construction, but not pointy, pointy,” he said. He also played with the trompe l’oeil elements that have come on strong for fall, with stitched loafer details on pumps and buckles on Mary Jane styles. The loafer, Kirkwood said, has been a long time coming. “I attempted [it] five years ago, but then torched it and haven’t tried since,” he said. “I’m trying to work out how to expand into new categories.” For spring ’12, he said to expect more flats, more mid-heights and greater focus on “high evening.”