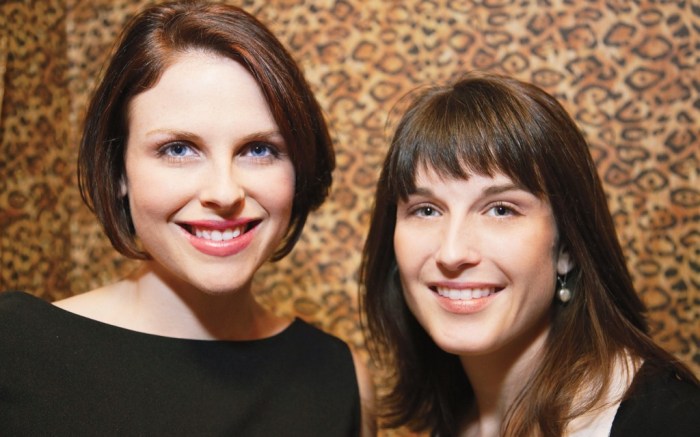 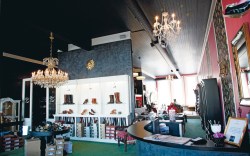 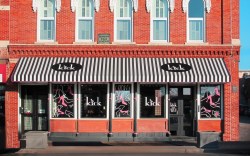 Retail brought together Andrea Poukey and Allison Krzych, so teaming up to open a store of their own seemed like a natural step.

“We met at Andrea’s mother’s home décor and antique store, [Ambiance], in 2000,” said Krzych, who co-owns the Kick footwear boutique, which bowed in 2007 in La Crosse, Wis. “Andrea was working, and I was shopping. We both liked fashion and shopping, and we became best friends.”

The women also shared a knack for business: Poukey had been at Ambiance for almost a decade, and Krzych has a degree in marketing.

Their footwear venture originally opened in a smaller shop, but moved last year to a 4,500-sq.-ft. space in a historical building that once housed a cigar factory, on La Crosse’s Main Street. The duo kept some of the building’s original features, including the humidor (one of the largest in the Midwest), which now serves as the “sale closet.” They also repurposed authentic items such as wooden carts and signs. Accented with an eclectic furniture collection amassed from countless estate sales, Kick has a vintage vibe.

Footwear brands including Frye, Seychelles, Camper and Sacha London now sit alongside handbags and accessories for women, and the new location features a men’s department in the basement. “For three years, we just did women’s shoes because it was our philosophy to do one thing and do it well,” Krzych said. “We added men’s after people started special ordering [men’s] because there was no other option in town.”

However, the bulk of Kick’s business is in women’s shoes, and its selection is constantly changing. “We don’t reorder what sells,” Krzych said. “La Crosse is a small enough town where you don’t want to see 100 pairs of your dressy heel around. It’s nice to challenge customers to find something else that would fit the same need.” The retailer also has an e-commerce site, which accounts for 5 percent of sales.

Despite La Crosse’s small size — it has a population of 52,000 — and largely conservative bent, Kick’s customer base is diverse. “Our town is pretty divided,” Krzych said. “We have three colleges, but we also have two hospitals. I would say our top 20 percent of customers have an [annual] income of more than $100,000, while 50 percent of our customers are probably making $30,000 to $50,000 a year.”

Such diversity gave the owners confidence that the tiny town could sustain the business. And Kick is the only higher-end shoe store in La Crosse, although a few apparel stores carry small footwear selections. “Our goal was to bring fashion to La Crosse,” Poukey said. “People were leaving town and traveling two or three hours to find what they wanted. We also had an advantage because my mom’s store was downtown, and we knew the customer base.”

So far, so good: Sales are up by double-digits from last year, said Poukey. “We are affected by the economy,” she said, “but because we are a small business, we can make incremental changes by the day.” Still, price points remain steady, at $75 to $500, though the owners did try reducing them in 2009, only to raise them up again. “Customers were used to the quality we were bringing in,” Poukey said. “Price wasn’t why they weren’t buying; they were just scared.”

Julie Wieshuber, Midwest sales representative for Tsubo at Deckers Outdoor Corp., said that as a vendor she was initially concerned about Kick’s viability in such a small area, but the store’s performance has made her a believer. “I wondered how much the La Crosse community could support a better shoe store,” Wieshuber said, “[but] Andrea and Allison do a fantastic job getting out in their community and building relationships and loyal customers.”

Kate Jorgensen, Consolidated Shoe Co. account executive for the Midwest, found Kick when she was prospecting for new accounts, and said the store has become one of her company’s larger independent customers. Its OTBT and Poetic Licence brands perform well there, and dressy heels fly out the door, she added. “Kick has a diverse clientele and does a wonderful job buying for them,” said Jorgensen. “They are able to cover comfort to extreme fashion footwear without making it mainstream.”

The owners said they also maintain Kick’s success by staying engaged with the community. The store is active in social media, and Kick co-organizes downtown shopping extravaganzas with La Crosse’s non-profit Downtown Main Street Inc. In addition, the staff of four participates in local charity events such as breast cancer walks. “We see a direct benefit,” Poukey said. “Our best customers are the organizers of those events. It’s a small world that way.”