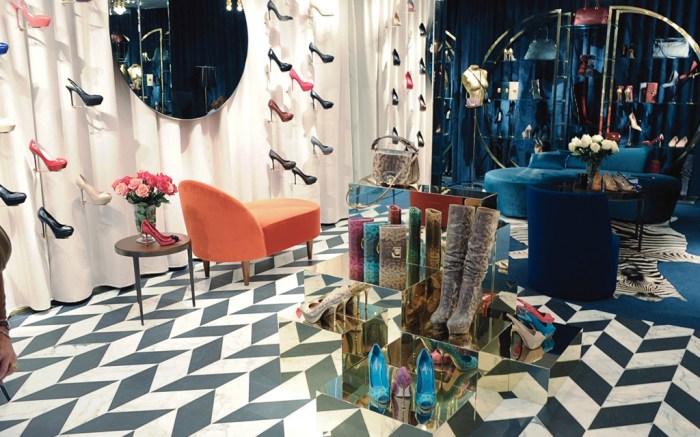 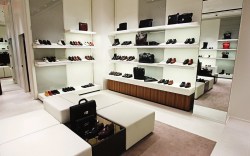 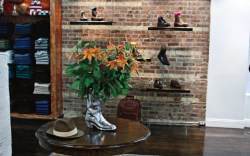 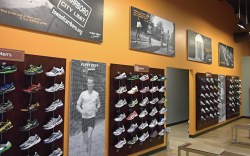 Rossi Returns to London
Sergio Rossi has reopened its London flagship on Sloane Street with a new design concept. The 594-sq.-ft. space was designed by the brand’s creative director, Francesco Russo, and London-based design consultancy Studioilse, headed by Ilse Crawford. “The London store [tries to represent] the two sides of reality … conformism opposed to transgression, brightness to darkness,” said Russo. The space is divided into a “Front Stage” and a “Back Stage,” with the former featuring brass lights and an Italian marble floor. The latter is a darker, more intimate setting with zebra-skin details, a velvet sofa and deep-blue walls. The fresh look has already been incorporated into boutiques in Paris and Rome. – Samantha Conti

Fleet Feet Opens Flagship
Fleet Feet recently bowed its first 5,000-sq.-ft. flagship store, and owner Brian White is hoping the 90-store chain’s franchisees can learn from the new digs. “The intent wasn’t to make a super-flashy store. We wanted a store where franchisees and potential franchisees could come in and get ideas,” White said. “It’s a great place to test ideas, and it’s walking distance from Fleet Feet headquarters.” The new space features a track in the back hallway sponsored by Saucony, as well as a Nike shop-in-shop that is under construction but is scheduled to be completed by early November.

Bally Goes to Washington
Bally recently bowed its new 2,250-sq.-ft. boutique in McLean, Va.’s Tysons Galleria, near Washington, D.C. And CEO Berndt Hauptkorn said the latest store was designed with an elegance that matches the product being sold. “Bally has a certain charm and understated elegance that fits very neatly with the Swiss philosophy of high-quality products and craftsmanship,” he said. “We’re not brash or flashy, but you know when you purchase a Bally piece you are buying a product that has been designed and crafted to the highest standards.” Hauptkorn said remodels of other stores are also under way to offer a unified vision for the brand. “We’ve refurbished many of our stores worldwide with special emphasis on those in Switzerland,” he said. “We want to set the benchmark as a global leader in luxury leather goods and continue making a clear statement about the importance of Bally’s Swiss heritage to the brand’s identity.” The store features the fashion house’s full assortment of shoes, bags, leather goods and ready-to-wear apparel.

NYC Gets New Men’s Shop
Veteran New York apparel and accessories retailer Eliot Rabin has added a fourth location to his Peter Elliot chain. The 750-sq.-ft. men’s footwear store, called Peter Elliot Boots Etc., will focus on boots from brands including Paraboot, Wolverine 1,000 Mile Collection and Martin Dingman, rounded out with a tight assortment of classic mocs from Allen Edmonds and Chapal. In addition, Rabin will introduce a small private-label collection. According to the retailer, he’s found a niche in the men’s market by specializing in boots. “Everybody does dress shoes,” he said. And Rabin hopes to bring in some female consumers with a small offering of styles by Back at the Ranch. – Barbara Schneider-Levy