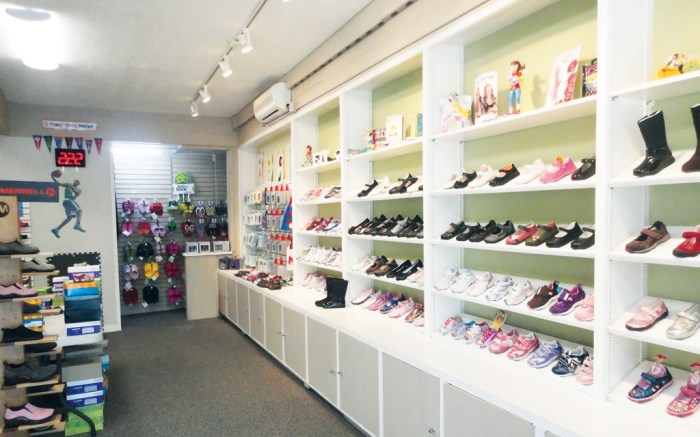 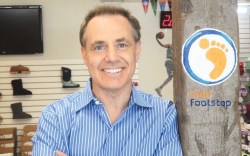 Father of three Eric Keough has turned his frustrations with shopping for children’s shoes into a flourishing business.

In March, Keough, a former advertising and marketing executive, opened Kids Footstop, a children’s-only shoe store, in the affluent Boston suburb of Winchester, Mass. His goal is to make the shopping experience stress-free for parents by providing a fun, engaging environment for their kids. “I dread shoe shopping for my children, especially going to the mall. It’s always an exhausting process,” Keough said. “I wanted to change that, offer something different for parents.”

With that in mind, Keough focused on the design of his 1,000-square-foot store, taking his own pet peeves into consideration. To avoid a cramped, crowded feel, he kept the layout open and uncluttered. “I know that in retail you are supposed to maximize every square inch of your selling space,” Keough said, “but I get frustrated when I’m in a store with my kids and there is no room to move. Children should be able to run around.”

To make the store inviting to families, he installed fun design elements including a Hangtime Meter, which times how long kids remain in the air after they jump up, and the “I Spy”-inspired Treat Tree, with small etched characters such as Hello Kitty hidden on it for kids to find. The store also features a TV, plenty of toys and a giant chalkboard on one wall. “They’re simple, gimmicky things, but the kids absolutely love them, and they completely change the dynamic in the store,” Keough said.

Jonathan Gilbert, sales representative for Jumping Jacks, a brand Kids Footstop has stocked since it opened, said the store’s child-friendly appeal gives it a definite edge. “The kids are kept busy with all the fun stuff, [allowing] their moms to focus on what they came to the store for: shoes,” he said. “[Kids Footstop] makes shopping very convenient for parents.”

Having no prior retail experience, Keough spent about a year prepping for the new venture. He visited nearly 40 retailers, from boutiques to big-box stores, to gather insight and ideas. He also tapped the expertise of a children’s retail consultant, Jim Burnham, who formerly owned several independent Stride Rite shops. Burnham assisted Keough in planning his initial buy, mapping out the store’s layout and organizing and maximizing the space in his stockroom, among other things. Keough said the advice has been invaluable. “Looking back, I realize I was going into this process very blindly. Jim helped me avoid making a lot of those [rookie] mistakes,” he said.

Keough has stocked Kids Footstop with shoes in a wide range of price points, from both American and European brands including Geox, Tsukihoshi, Stride Rite, See Kai Run, Lelli Kelly, Merrell, Primigi and Ugg. As he gets a better feel for the customer base and what is working, Keough said he plans to whittle down the brand list and buy deeper into the best-selling lines. “I want to have a small stable of core brands, and then bring in new lines as I go,” he said.

Bunny Pollack, sales representative for See Kai Run, said that Keough has a good buying eye. “He is very focused on choosing just the right mix of styles for his particular customers and location,” she said.

Because of a limited advertising budget, Keough is getting creative with grassroots marketing efforts. For instance, he has partnered with two other local independent retailers — a bookstore and a toy store — on a cross-promotional initiative designed to drive traffic between the three stores: Customers who purchase something at one store can take their receipt to the other two and receive a 10 percent discount.

Keough has also reached out to the directors of local kids’ sports programs to offer a group discount on their athletic footwear. He recently fitted 50 girls from the Pop Warner cheerleading club with Asics sneakers. And for the Winchester Youth Soccer League, he has put together a knee-to-toe kit from Puma that includes cleats, socks, shin guards and a ball.

Despite opening amid a difficult economy, Keough said sales have so far exceeded his expectations. Encouraged by the positive response from customers, he’s already thinking about rolling out additional Kids Footstop locations. “I want to get this location solidly on track, and then I would love to add one or two more stores,” he said. “There is a strong anti-mall sentiment going on right now, so there is a real need for and interest in smaller, local shopping options.”