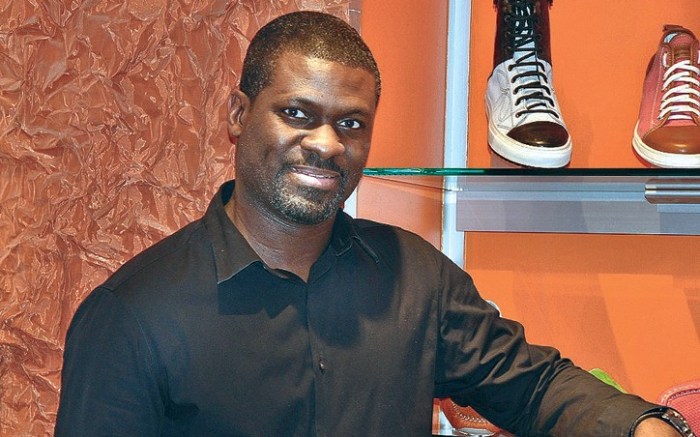 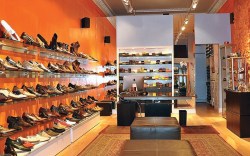 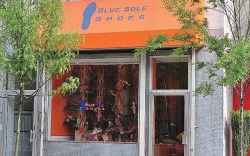 The owner of Blue Sole Shoes, a highend men’s shop that opened in Center City in 2007, Jamison has earned a reputation for not shying away from edgier looks. “Guys are bored with what’s out there. They want footwear that’s a little more exciting,” he said. “Even in my more classic and conservative styles, I still offer something a bit different, whether it’s the stitching or the leather or the last.”

The approach has paid off. Despite the challenging economy, Blue Sole Shoes is thriving. “The store was profitable the first year, and my business has grown ever since,” said Jamison.

Prior to opening Blue Sole Shoes, Jamison spent 20 years in retail, in various sales positions at Macy’s and Bloomingdale’s, followed by stints at several of Philadelphia’s high-end boutiques. Intent on one day launching his own shop, he used the time to learn about the business. “I did a lot of looking over shoulders,” he said, “and I really listened and tried to absorb everything.”

The Right Mix
When it comes to product, Jamison said that having a strong point of view is critical. “It’s very evident [to] a customer whether the owner is passionate about offering a great selection of merchandise,” he said. “I tend to go for design as opposed to brand names. I want customers to be wowed.”

Blue Sole Shoes features a mix of casual and dressy styles from labels including Roberto Guerrini, Magnanni, Dino Bigioni, Alessandro dell’Acqua, JoGhost, Area Forte and Pirelli. And Jamison is always looking for new collections. In fact, he made his first buying trip to Micam in March to scout European resources.

The store also stocks watches, cuff links, cologne and socks, and Jamison is planning to add leather goods such as bags and jackets. “I’ve hit on a nice little market with the socks, in particular. I sell a ton of them,” he noted.

Service Issues
Having experienced his share of bad sales help as a consumer, Jamison is a stickler about customer service. “Poor service has become so ingrained in the retail culture that when people do receive great service, they really notice it,” he said, noting that it doesn’t require anything extraordinary. Simple things, such as greeting customers with a friendly hello and a handshake or spending as much time as possible on the sales floor getting to know them, go a long way. “It’s critical you befriend your customers and forge that connection,” Jamison said. He makes a particular point of reaching out to the younger clientele. “I get a lot of kids coming in for their first dress shoes for prom or graduation, and most aren’t used to wearing shoes. They’ve grown up wearing sneakers,” he said. “The process can be intimidating, so I try to educate them and encourage their interest in owning nice shoes.”

By Design
To rein in costs, Jamison tackled the design of the 1,200-sq.-ft. store himself. He opted for a contemporary look, with a bold, orange-and-blue color scheme, copper mesh accents on one wall, maple-hued hardwood floors and oversized leather ottomans. “I didn’t want the store to look like a typical shoe store,” he said. The space features a partition wall that can be moved to suit the store’s needs. “As my business grows, I have the flexibility to change up the space,” he said.

Promotional Strategies
Blue Sole Shoes focuses its marketing efforts mainly on direct mail, tapping into the store’s existing customer list. So far, Jamison said he hasn’t felt a need to do more, thanks to steady press in Philadelphia’s local media, along with plenty of word of mouth. Comedian and Blue Sole regular Steve Harvey has plugged the store several times on his syndicated radio show, for instance. “That’s the kind of publicity you can’t pay for because it’s genuine,” Jamison said. “We’ve been really lucky in that we’ve had a lot of people talking about the store and helping to get the name out there.”

Facing Challenges
For Jamison, the shrinking number of men’s-only shoe stores in the U.S. provides both a challenge and an opportunity. “Stores like mine are definitely a dying breed, so it’s tough, but there’s a real need. I believe men like the idea of shopping in an intimate atmosphere and being able to look at an eclectic mix of vendors,” he said. The slow economy, he added, has given boutiques a chance to stand out even more, as department stores and chains have pulled back on more-aggressive styles. “A lot of retailers now are sticking to conservative product because it has a longer shelf life and they don’t have to worry about turning their inventory as quickly,” Jamison said. “I’ve found that more people are coming to me because I offer something unique.”

Feedback
Pascual Blanco, president of Magnanni, cited Jamison’s strong buying eye and intuitive understanding of his customers’ needs as key factors in Blue Sole’s success. “Steve does a great job identifying with his customer and offering unique product that fits his market, which is necessary to survive in today’s competitive market,” Blanco said.

Emiliano Baccarini, president and CEO of Ultramoda, the U.S. sales office for Roberto Guerrini and Alessandro dell’Acqua, agreed, noting that Jamison’s willingness to take risks with his merchandise gives him an advantage. “There aren’t many men’s-only stores anymore, and the men’s business is flattening out,” he said. “Especially with the recession, stores like Steve’s that are still proposing new things and are gutsy in their buying are [becoming more] important to customers.”

Customer base: The store attracts men of all ages, from high school kids to area businessmen.

Competition: Department store stalwart Boyds Philadelphia is located on the same block, but the men’s offerings there tend to be conservative, Jamison said. “My store is much more fashion-oriented, so I don’t really consider it my direct competition.”