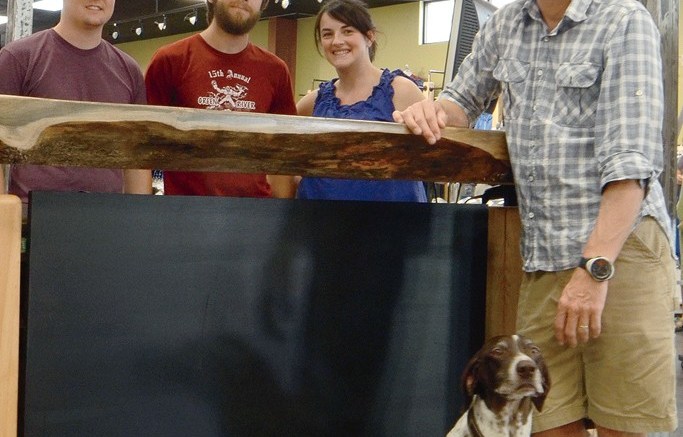 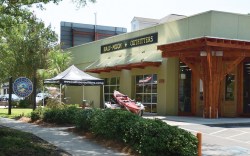 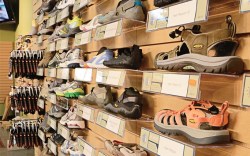 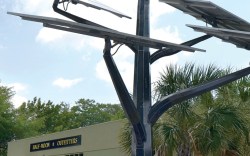 Half-Moon Outfitters is looking to grow its business and help the environment at the same time.

Last month, the outdoor retailer bowed a new store in Columbia, S.C., built with sustainability in mind. Green design elements include regionally harvested wood used in the construction, as well as non-toxic paints and energy-efficient lighting. It also derives 10 percent of its power from solar panels installed on a sculpted tree in front of the store.

“[The shop’s design is] a very green statement across the board,” said founder Beezer Molten. “It’s just capped off by the solar tree, which is a mixture of art and energy.”

But for Half-Moon, sustainability goes beyond the store. Headquartered in North Charleston, S.C., the retailer services its eight stores in South Carolina and Georgia from a distribution center that is an LEED platinum-certified green building.

“[Sustainability] is a value from which we will never deviate,” Molten said. “I’d have to say the biggest thing is that it’s an extension of customer service because we’re delivering a space that our consumers value and where our employees are proud to work.”

Alan Newhart, eastern regional sales manager for Merrell, said Half-Moon’s commitment to the environment is a major asset. “They are very aware of the footprints they leave and are always looking for better ways to serve the communities they represent,” he said.

According to Molten, the chain has taken advantage of a revival in the outdoor industry, leading to steady growth for its stores. Half-Moon hit $12 million in sales in 2010 and is targeting $13.2 million this year, with 35 percent of sales coming from footwear.

“The outdoor industry is enjoying a lot of popularity right now in a lot of different categories,” Molten said. “And footwear has been a bright spot.”

Half-Moon’s shoe selection includes hiking boots, clogs, mocs and running shoes from brands such as Asics, Patagonia and The North Face, with price points of $60 to $200. Molten noted that sandals from Keen and Reef have been strong performers recently, in addition to minimal running styles.

The retailer’s vendors said Half-Moon also excels by delivering a store experience that caters to its shoppers. “They educate the consumer well,” said Michael Martin, VP of sales at Vibram. “[Consumers] have a fun experience in the store, and that’s what the outdoor business is all about.”

Paul Jordan, a Keen sales rep, said Half-Moon also benefits from being in key markets. “Each store is in a different geographic location, so it allows them to tailor their buys,” Jordan said. “It [allows] flexibility to test a product in one market and then distribute it to others.”

Further expansion would happen at a gradual pace, Molten said, adding that he hopes to open two to four more doors over the next five to seven years. New stores would not only be environmentally friendly but also in owned spaces.

“We do intend to open more stores and, when possible, own the location rather than lease,” Molten said. “We have more control over the end results [that way], and it’s easier to justify [making changes] when you’re committed to owning the building for a long time.”