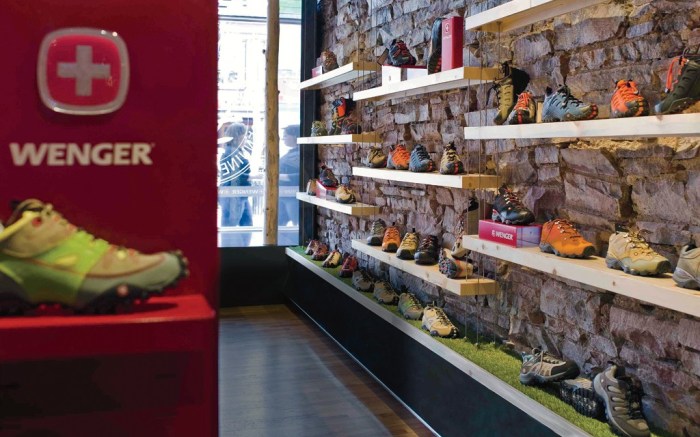 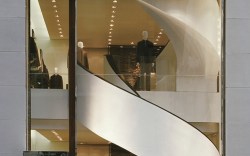 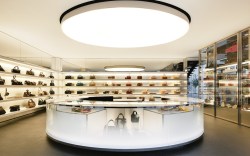 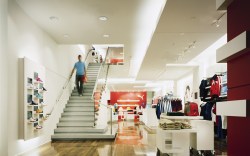 “Retail stores need to be designed as immersive destinations: a living, breathing representation of the brand that can’t be duplicated online,” said David Rockwell, head of Rockwell Group and perhaps the world’s most celebrated designer of restaurant and hospitality spaces. The firm also has designed for Mauboussin and FAO Schwarz. “This way, consumers will want to make the pilgrimage, to go to the space regardless of whether they intend to buy the product.”

The Santa Monica, Calif.-based design firm created for Puma a sleek, clean store look that has been implemented in locations across the globe, from Antwerp to Chicago.

According to Stéphane Corbel, a design associate at the firm, the Puma project was a lesson in how simple, inexpensive design decisions can have a big impact.

Kanner changed Puma’s signature in-store color from a green to a “modern, edgy red that really allows the logo to stand out,” said Corbel. “The white-on-red scheme gives a high-impact, striking identity to the stores.”

Corbel added that the bold color, which also is featured in the exterior façade, draws consumers into the space. The red shade continues into the store to the back wall.

“It urges people along, step by step. It grabs them and gives this sense of something exciting happening that they have to see,” he said. “We always try to provide a focal point deep in the store.”

The white walls and white, floating, backlit display shelves “serve as a canvas for the merchandise,” said Yukiko Takahashi, another Kanner designer.

One tip from Kanner’s design team is to include an element of surprise in any store layout.

The Puma stores accomplish this with unexpected wallpaper in the dressing rooms — images of bowling alleys, for instance — and by hiding merchandise in nesting tables situated throughout the store.

“Shoppers have an appetite for new, innovative experiences. You need to make every visit memorable,” Takahashi said.

Inventing Icons
Architect Russell Groves has worked with a wide range of storied brands in retail, from Polo to Neiman Marcus. And while each client or product category presents unique design challenges, two principles always apply regardless of what is being sold.

“Keep the focus on the merchandise, and no matter what, tie the design back to the brand, whether that means fun and casual or serene and sophisticated,” said Groves, who is based in New York.

This intense focus on the brand is exemplified in Groves’ project for Blanc de Chine, a prominent apparel and accessories boutique in Manhattan. The client is known for its modern interpretations of traditional Chinese clothing, and the store embodies that aesthetic by setting contemporary metallic elements against rougher, more rustic woods.

The store’s design centerpiece — a dramatic, spiraling, three-story staircase — reveals how an investment in a brand-burnishing design can yield dividends that go beyond mere architectural appreciation.

“The [company] didn’t have a strong U.S. presence or a big ad campaign,” Groves said. “But this staircase becomes a billboard for them. We created something iconic and memorable that stays with customers long after they leave the store.”

In the Mood
For Stephan Jaklitsch, principal at New York-based Jaklitsch/Gardner Architects, the cornerstone of a successful design comes down to mood. “[The] psychological impact is critical in any design decision,” he said. “What kind of mood do you want to set as soon as someone steps across the threshold?”

From that point, Jaklitsch said, his job is to translate the concept of shopping into a form of theater.

At the Marc Jacobs store in Los Angeles that the firm designed in 2006, the goal was to evoke Hollywood glamour. Jaklitsch said he knows he succeeded by the way people respond when they enter: “Their voices immediately go down to a whisper. It’s amazing how architecture can affect behavior.”

In Jaklitsch’s view, the right design moves will serve to fulfill two competing yet equally critical functions: pulling shoppers through a space as the merchandise unfolds in front of them, while also inviting them to linger in select locations. “Architecture can induce a sense of movement or pause by just opening or constricting a space,” he said.

At the Marc Jacobs shop in the Aoyama neighborhood of Tokyo, the aim was to convey an ultra-contemporary feel, which was partly achieved with a terra-cotta cladding for the store’s exterior. “We took a mass-produced object and made it unique by breaking each piece during the fabrication process. This gives the façade a jagged edge that really stands out.” The front elevation also showcases a self-cleaning, perforated aluminum feature because green materials are important to the targeted Japanese shopper.

Jaklitsch is in favor of such sustainable material choices, but he thinks the real green challenge “is to overcome the history of retail being ripped out after five years. That’s a tremendous waste. A timeless design will last a lot longer, which is ultimately the greenest design of all.”

Tech Trailblazer
When asked how designers should take into account the latest developments in technology while planning a retail space, David Rockwell, founder and CEO of the New York-based Rockwell Group, pointed to the “Never-Ending Forest” interactive prototype that his firm’s LAB division developed for Timberland.

The goal of the project was to bring a sense of the outdoors inside and help foster an emotional connection between consumers and the Timberland brand, Rockwell said.

“‘The Never-Ending Forest’ consists of an interactive digital installation that underscores the origins of the Timberland brand. The forest scene is randomly generated and projected on a wall, driven by different visitors’ movements. The result is a non-repetitive and photorealistic environment. The spectator’s view through the forest continually pans left to right, generating new forest views as the camera pans out of frame. The idea was also that future permutations of this design would be configured for phone applications and mobile Web devices and would include remote video updating.”

Rockwell said he’s also excited by the growing popularity of pop-up shops and other portable retail spaces that allow for a wide range of creative options.

“Brands have started using the pop-up store as a marketing tool to create a temporary, celebratory experience that excites customers about the brand. And they allow for the greatest flexibility to deliver services, events and experiences.”

The Authenticator
At Gensler, one of the world’s largest architectural firms, strong design stems from brands being authentic and staying true to what they are.

“Brands need to speak with authority,” said Kathleen Jordan, the firm principal who heads the retail studio in New York. “If they become inconsistent, it leads to a lack of loyalty because customers get confused.”

So when Gensler began work for Aetrex, which prides itself on its high-tech approach to the way it manufacturers and fits shoes, the store had to display the brand’s commitment to using technology. The result was a concept built around the brand’s iStep fitting tool, the Microsoft “Surface” technology that is built into interactive tabletops showcasing Aetrex’s product catalog, and videogames.

At the Gensler-designed Wenger store in Boulder, Colo., the design underscores the brand’s appeal to environmentally sensitive shoppers who love the outdoors. The store features wood harvested from trees that had been laid to waste by a beetle infestation.

Jordan also believes footwear retailers need to think beyond the feet when outfitting stores with display mirrors. “A woman wants to see herself in her total outfit, from head to toe,” she said.

She added that retailers should rethink how transactions take place once they make the sale. She suggested scrapping the traditional cash wrap and moving the point of sale into the fitting room, or even arming the salesforce with transaction-handling tablets.

“I would like to see retailers really embrace technology and empower their salesforces by giving them hand-held devices that can process transactions on the floor,” said Jordan. ” Cash wraps are a big investment — $10,000 to $30,000 in millwork. They take up a lot of space. In today’s digital age, there’s really no need for cumbersome desks to process the sale.”