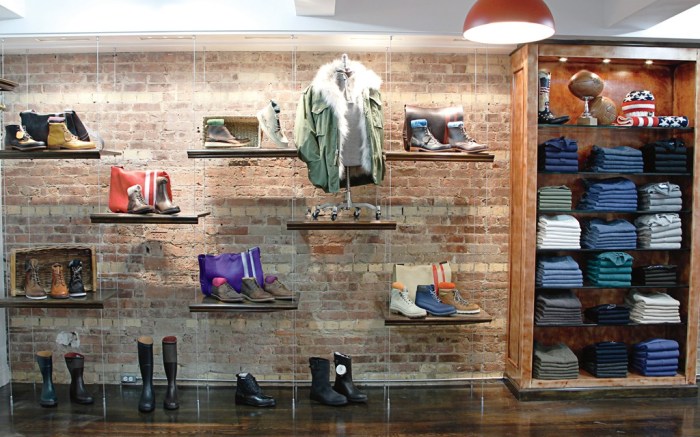 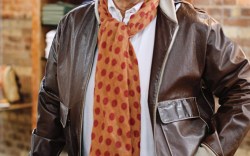 “I never wanted to be a shoe [retailer]. Everybody does shoes,” said the store owner. “But I’ve found a niche with great rain and hiking [styles].”

Although Rabin admits it’s a tough time to launch a new venture, he said he is confident that men will dip into their pockets for the right product. He predicted that the 750-sq.-ft. store, located on Madison Avenue, could eventually generate $1,000 per square foot a year. “At some point, the economy comes out of a recession,” he said. “People get frustrated [not] buying.” And Rabin, who caters to a high-end customer, noted that the luxe market remains relatively stable.

As a result, the store stocks a diverse mix of brands, including Wolverine’s No. 1883 and 1000 Mile collections, Dr. Martens, Aigle and the Spanish line Carmina. In addition, the shop is the first and only New York retailer to offer high-end Western boot brand Back at the Ranch. “People love [Western] boots. They’re an American tradition,” Rabin said. “Every guy in the back of his psyche would love to be a cowboy.”

Located within walking distance of Rabin’s other three Upper East Side stores — Peter Elliot Men, Peter Elliot Women and Peter Elliot Blue — the new boot shop is attracting many of the same customers. It also sits next to a barber shop, which should add to the traffic flow, Rabin said. And with the closing earlier this year of legendary New York Western-wear retailer Billy Martin, there is an opportunity to pick up some of that business.

The Back at the Ranch brand, whose products retail from $800 to $15,000 for a full alligator style, is the new store’s core line. The brand’s founder and designer, Wendy Lane Henry, has hosted a series of trunk shows at Peter Elliot Boots, Etc. and said the store allows her to better reach existing New York customers. “I have so many customers already living here,” said Henry. “I knew I had a built-in audience.” To make sure the Peter Elliot staff understood how to properly fit the boots, Henry invited store manager Vicky Mavromatis to attend fitting training at Henry’s Santa Fe, N.M., store.

To appeal to a wider audience, Rabin has rounded out the store’s mix with more traditional shoes from Allen-Edmonds and Martin Dingman, and he plans to add fleece-lined driving mocs by French brand Chapal. He also stocks novelty styles from Native and African-made Oliberté, as well as private-label cycling shoes. If customers still can’t find what they’re looking for, Rabin will fill special orders through three custom shoemakers in the city.

When selecting the product mix, Rabin puts an emphasis on American-made footwear. “People are starting to make things here again,” he said, noting that extreme price differences no longer exist between U.S. and Asian goods. “I’m an advocate of made-in-the-U.S. There are wonderfully crafted things here.”

And when it comes to his European labels, Rabin said he looks for collections with a strong heritage, such as Dr. Martens.

Steve Johnson, a regional account manager for Dr. Martens, said the brand’s made-in-England product fits well at Peter Elliot. “We utilize U.K. [leather] suppliers for this product, making these items interesting to consumers,” he said. “The store’s [uptown location] is perfect for this, [thanks to the upscale clientele].”

And because Rabin has a history of selling clothing and accessories, about 20 percent of the new store’s mix includes non-footwear items such as Agave denim, Montclair and Willensteyn outerwear, and private-label duffle coats with alligator toggle closings. It even sells special-order Broncks Black bicycles.

Next, Rabin is eyeing women’s boots. He currently offers a selection of ladies’ styles from Back at the Ranch, and since the store’s opening, the women’s business has been a surprise success. “We’re getting demand from women,” said the retailer, who plans to expand that category.