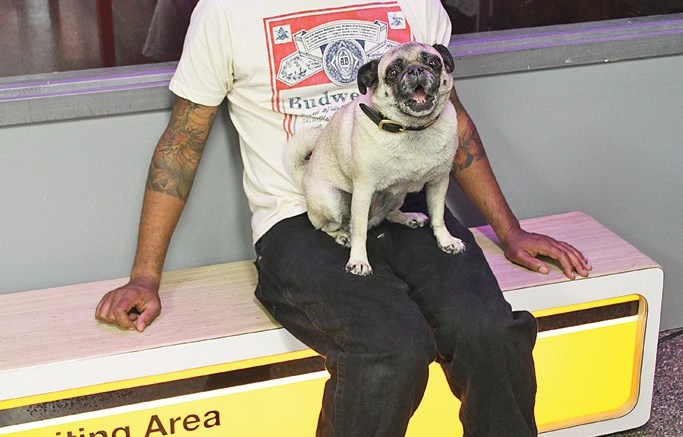 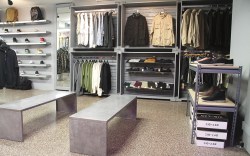 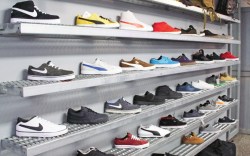 Dave Ortiz is a retailer reborn.

The former BMXer and Lower East Side mainstay made his mark in the footwear world with Dave’s Quality Meat, the skate-and-sneaker shop he founded in 2003 that became known for stocking the latest and most exclusive kicks in town. But after parting ways with the team at his old store (now doing business as DQM), Ortiz has a new mission at Dave’s Wear House, the 1,400-sq.-ft. shop he opened in New York’s Chinatown in July.

“It’s a totally different direction from DQM,” Ortiz said of his new store, located at 123 Baxter St. “It’s about the masses. It’s not about the cool kid.”

Along with partners Kevin Carney of Shut Skateboards and lawyer Victor Salerno, Ortiz has created a space where a stripped-down collection of BMX and skateboarding basics — shoes, decks, T-shirts, sweaters and accessories — sells at rock-bottom prices.

“My theory is there’s more money in volume — and nobody really has money,” Ortiz said.

Merchandise is displayed on racks, shelves and tables, most of which Ortiz and his partners built themselves. The warehouse aesthetic extends to the displays: The product is all conspicuously tagged with prices, and the arrangement is simple. A cushion on the lower level of the shelf nearest to the cashier area is reserved for Ortiz’s constant companion, Squishy, a 10-year-old pug.

The store stocks skateboard styles from Nike 6.0, DC, Etnies, Puma and Gravis, and will add Sorel boots for men and women and Converse skate styles in the next few months. The most expensive styles reach to $120, but the majority cost between $60 and $70, Ortiz said.

Ortiz also brought in ZigZag shoes, an underground favorite no-name brand of canvas-and-suede shoes that sell for $20 and $25. “I just wanted something that was [simple] and super-affordable,” he said. Footwear makes up 60 to

Ortiz designed the shop’s exterior, with a big

picture window and minimal store branding to make the merchandise the focus. “I want the product to sell itself,” he said.

The idea, he said, is that the goods reel you in — and the prices hook you. “If you’re on [nearby] Canal Street, you’re looking for a deal anyhow,” he said.

“I have much respect for Dave. His track record in retail reinforces his amazing ability to spot trends and keep people wanting the product he chooses to put on his retail shelves,” said Pierre-André Senizergues, founder and CEO of Sole Technology, the Lake Forest, Calif.-based parent company of Etnies, ThirtyTwo and Emerica.

“Etnies is glad to be a part of his new store.”

“Dave is like a skateboard historian. Consumers living in and or visiting NYC will benefit from the service, knowledge and storytelling only a Dave Ortiz can offer,” said Hommy Diaz, who oversees marketing for DC Shoe’s new Nvrbrkn skateboard line, which launched at Dave’s Wear House in July. “Many may say he is crazy for opening a retail store during a volatile economy, but then again, he is ‘Crazy Dave.’ We partnered with Dave to support the grand opening because he is the perfect person to represent the Nvrbrkn spirit.”

As the shop grows, Ortiz said, he has expansion plans. Next summer, he’s toying with the idea of offering bikes to rent. Rentals, he said, would be accompanied by an audio tour recorded by him that takes the listener from the store to his favorite spots to ride — even letting them know where they can get the best dumplings.

Ortiz is also working to partner with local school boards. He’d like to work out a system for kids who do well on their report cards to get a discount at the store.

More traditionally, he’s looking online. And while the store uses Facebook as the hub for all of its online activity at the moment — because it’s free and “everyone is there” — Ortiz plans to launch e-commerce in the future, though there’s no timeframe in mind.

Future initiatives will need to follow the store’s stripped-down approach to retailing, he said: “We’re not trying to get all fancy-pants about it.”