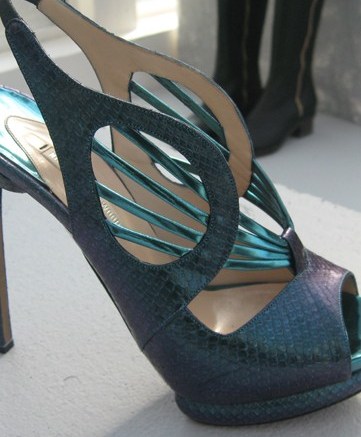 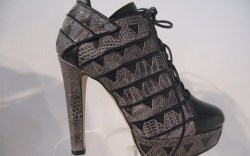 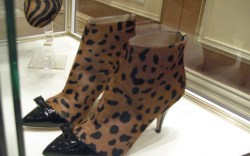 Top luxury buyers lauded the fall footwear offerings in the City of Light this week, particularly from the growing crop of young designers showing here.

“Shoes are looking more demure than in past seasons, but in a good way,” said Todd Hanshaw, fashion director and DMM for Wynn Las Vegas. “The footwear is working with the ready-to-wear. It’s no longer all about being the statement piece. And that’s great because there’s a lot to choose from.”

On the brand front, Hanshaw said Christian Louboutin continued to look strong, while Nicholas Kirkwood and Charlotte Olympia also delivered again this season. The retailer also picked up Gio Diev, the new line from Bulgaria-born designer Gio Metodiev. “I liked the consistency in his collection, and it didn’t look like anyone else’s,” Hanshaw said. “I’m looking forward to getting it in store.”

“I love the rich color and material interest,” Margolies said, adding that Aperlai had a strong fashion sensibility as well.

Morris’ collection also struck a chord with Natalie Kingham, international women’s wear buyer for London-based Matches. “Her shoes stood out far more than anything else at Premiere Classe,” Kingham said.

The buyer also cheered this season’s big trend stories. “I love the velvet trend that keeps coming up in various shows and showrooms,” Kingham said. “A lot of printed shoes have also been shown, and another trend is details on the heels of shoes, from Perspex and crystals to carved detailing and soft fabrics.”

Nazan Egilmez, head buyer for Istanbul-based luxury department store Vakko, saluted Walter Steiger for staying relevant over the years, and said the brand was a best seller at the store, which also stocks Givenchy, Barbara Bui, Casadei, Kenzo and other high-end names.

“People always come by and ask for Steiger. [The shoes] are very well done technically, and our customer gets addicted,” Egilmez said, adding that she bought 600 pairs last season and since they nearly sold out during the pre-sale period, she will bring in an even larger quantity for fall.

Other buyers also said the fall collections in Paris had them feeling bullish, and as a result they were spending more than a year ago.