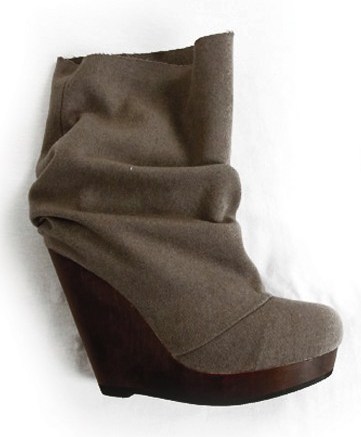 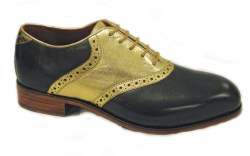 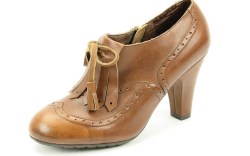 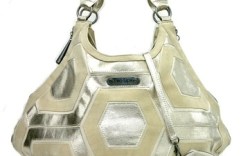 Tall Order
JNBY, which launched a capsule footwear collection for spring ’11, will unveil a broader line of architecture-inspired looks for fall. The offering is composed of 15 styles, including boots, flats, wedges and athletic-inspired laceups in a variety of skins and fabrics, in neutral and metallic colors. The looks include a metallic burnished tap shoe, slouchy pull-on boot and a platform wedge bootie designed to look like a sock. The $195-to-$595 shoes have been picked up by Shopbop.com and will be available in JNBY stores.

Just Duckie
Florsheim by Duckie Brown will extend its tailored menswear line to the female crowd this fall. The brand will launch a women’s shoe collection of two styles based on its most popular men’s looks, the Saddle and the Brogue. Highlighting Duckie Brown’s signature colorways, the Saddle comes in four color combinations: cream and black, dark gray and gold (below), navy and purple, and navy and army green. The Saddle also will be offered in black lace-cut leather. The Brogue is available in six colors: pewter, scotch, gold, white, cranberry and black. The shoes are priced between $300 and $600 and will be sold at The Tannery in Boston, Blackbird in Seattle and Gimme Shoes in San Francisco.

Street Style
Juniors’ brand Me Too will expand to include casual styles for fall. While the core brand features primarily dress shoes, Me Too Soho will feature more laid-back looks. The collection of about 20 styles will showcase distressed and vintage leathers, brushed metal buckles, shearling linings and zipper and lace details on loafers, boots, booties and oxfords. The color scheme will focus on neutrals, including black and cognac. The shoes will retail for $89 to $200 at department stores and specialty boutiques.

Lip Locked
Two Lips will enter the handbag market this fall. The collection, which is manufactured in China, will include metallic, glitter and stud details on 40 styles. Retailing for $60 to $100, the line will be available at department stores, specialty boutiques and select independents.