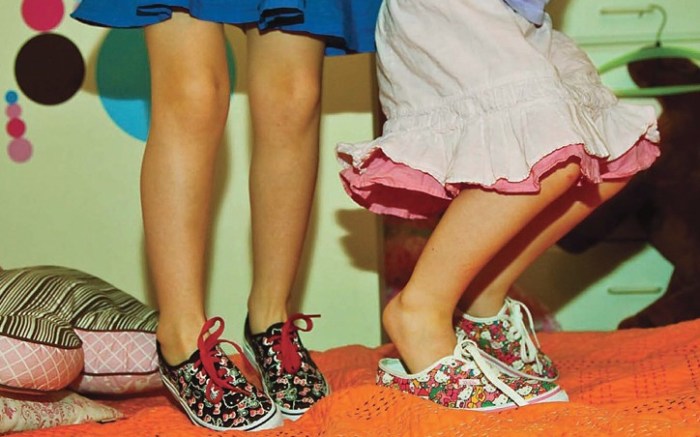 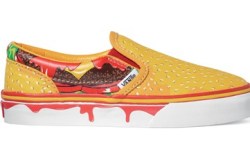 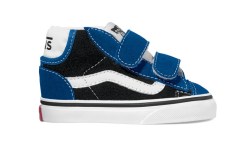 The Cypress, Calif.-based skate brand this fall will kick off a campaign to significantly grow its profile in the children’s market. It aims to do so with an expanded product offering, more kid-friendly designs, ramped-up marketing and exclusive collaborations, including a Hello Kitty line that launched in stores last week.

“We’ve made kids’ shoes since the beginning, and it’s a category that has continued to grow for us, but it just hasn’t been a focus until now,” explained Steve Mills, director of lifestyle footwear for Vans, a division of Greensboro, N.C.-based VF Corp. “We now feel we have the opportunity to concentrate on it and approach it as a real business. It could become something significant for our brand.”

The company’s first move was to hire a dedicated product manager, Ashley Awah, to oversee the kids’ classics business, its largest and most popular category.

Awah and the Vans team are working to broaden the product offering. The upcoming fall collection will include a number of new models, all taken directly from Vans’ adult line, including the 106 Moc, a boat-inspired look; the Era Laceless, a retro slip-on; and the Mid-Skool ’77, a mid-height sneaker. The spring ’12 line is expected to be even bigger, numbering roughly 110 SKUs, a nearly 60 percent increase from past children’s collections.

According to Mills, the brand’s core classics have driven sales in the adult business. “As a brand, we really hang our hat on classics — it’s our DNA,” he said. “So as we build our kids’ business, we want to start with stuff we’re known for. As the business grows, we’ll probably look to branch out and do some kids’-specific models.”

To appeal to younger consumers, the design team is bringing in more kid-friendly colors and prints. The fall line, for instance, features whimsical watermelon, cheeseburger and banana-split print motifs. “We’ll still cover our key basics — the blacks, the whites, the reds — but we also want to experiment and make the line more fun and interesting for kids,” Mills said.

Vans also hopes to capture attention with special collections featuring popular brands and characters. In the past year, the brand released successful collaborations with Crayola and Nick Jr.’s “Yo Gabba Gabba,” and last week it rolled out its Hello Kitty series for girls. Retailing from $25 to $37, the line features two of Vans’ most popular styles, the Classic Slip-on and the Authentic lace-up, embellished with prints of Sanrio’s iconic feline. And Mills said the company already is planning a second wave of Hello Kitty styles, along with a follow-up “Yo Gabba Gabba” line, for the holidays.

The brand also has taken steps to improve the fit and function of its footwear. A careful study of its toddler shoes, in consultation with a pediatric podiatrist, revealed certain construction problems, prompting Vans to make a number of design changes. “Our sidewalls were a bit too high, our rubbers were a little thick,” Mills said. “We felt if we were really going to get into this business, we should do it right.” The shoes now feature lighter constructions; thinner, more flexible bottoms; and lower sidewalls. To make the shoes easier to get on and off, throat openings have been adjusted, and the brand is using more alternative closures such as elastic laces.

With all the changes on the product side, Vans plans to put more muscle behind marketing the kids’ line, utilizing everything from print media to the Internet. “We’re starting to put together a strategy and looking at hitting the ground running in spring ’12,” said Mills. Promotional events also will be part of the marketing push. Vans’ own retail stores, Mills said, provide a platform for consumer-driven events such as character appearances and signings.

Retailers that carry the Vans kids’ line are bullish about the expansion plans. Jim Estepa, SVP at Journeys Kidz parent firm Genesco Inc., said he sees opportunity for Vans in the category. “When we launched Journeys Kidz 10 years ago, Vans was one of the first brands we went to,” he said. “They have a great ability to take styles that are relevant to teens and adults and bring them down into kids’ sizes. That will continue to be an advantage for them.”

And the fact that Vans is putting a younger spin on those takedowns is a smart move, he added. “You’re still dealing with kids, and that means there have to be some brighter colors and more embellishments.”

While Vans expects its existing retail partners to be integral to its efforts to grow its kids’ business, the brand also aims to break into new accounts. “There are a lot of points of distribution for kids’ that we feel we should be in,” Mills noted. Independents, in particular, are key targets. And while the channel will not drive huge numbers, he said, independents are critical to giving the brand credibility.

Still, Vans faces steep competition in the kids’ category, not only from other core skate brands but fashion players offering their take on the California skate and surf look. “The market is flooded, and it’s not just brands but private-label people as well,” Mills said. “So price sensitivity is a huge issue, but [our] heritage really resonates with the consumer and gives us a tremendous advantage as we look to grow within the kids’ business.”