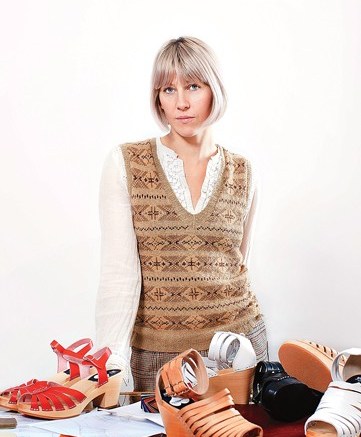 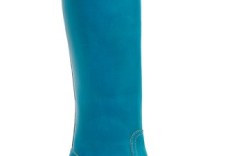 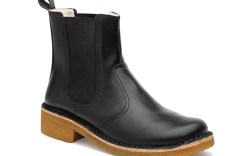 The brand, founded by childhood friends Emy Blixt and Cecilia Wingård Neuman, has built a growing business by reviving retro footwear looks such as wood-bottom sandals and clogs. Swedish Hasbeens is sold in more than 500 shops around the world and enjoys a cult-like consumer following that includes celebrities such as Sarah Jessica Parker and Maggie Gyllenhaal.

Now the brand is poised to get even bigger, as it broadens its product offering and expands international distribution, as well as readies an exclusive collection for fast-fashion giant H&M this month.

The seeds for what would become Swedish Hasbeens were planted in 2007 when Blixt, then a schoolteacher in Stockholm, purchased several hundred pairs of 1970s clogs from an old factory in southern Sweden. “Everyone wore these clogs in the 1970s when I was a kid, and then they went out of style,” Blixt said. “But when I visited the factory and saw the clogs, I just felt that the moment [in fashion] was right for bringing back that type of look. So I bought up all the old stock and decided to see what I could do.”

Her instincts proved right. Back in Stockholm, friends clamored for the clogs. Encouraged, Blixt and Neuman began selling them to vintage shops and trendy boutiques around the city. “We just started following the demand,” Blixt recalled. “Now there are a lot of wooden shoes out there, but at that time the clogs were very fresh and new, and people responded to that.” Within a few months, the duo had sold through their stash, so they tapped two small factories in Sweden to hand-make new styles based on the old designs, and Swedish Hasbeens was born.

In those early days, the brand grew in a grassroots way, Blixt explained, with Sweden’s fashion crowd helping to spread the word. “Much of our success in the beginning was due to being in the right kind of stores, which meant the right people saw the shoes,” she said. “A lot of models, stylists and girls working in fashion were buying the clogs.”

As business took off, Hasbeens steadily added other wood-bottom styles, including boots and loafers, as well as shoes built on leather and rubber. Children’s styles were introduced, along with a small assortment of bags and belts. This fall, the brand will launch unisex footwear, including pull-on and lace-up boots, to attract male consumers. Roughly 75 percent of Hasbeens’ collection is produced in Sweden, with the rest made in Italy and Romania.

In the U.S., the line is priced from $240 to $450, with distribution focused heavily on apparel retailers, including boutiques and specialty chains such as J.Crew and Urban Outfitters. “We sell to shoe stores, but we’re very strong with shops that have a lifestyle concept,” Blixt said. “Part of our strategy from the beginning has been to sell our shoes as an accessory to clothing.”

It’s a strategy that has paid off, considering the recent dominance of retro influences in ready-to-wear. Still, while current trends have helped fuel the brand’s growth, Blixt stressed that Hasbeens is about more than classic wood-bottom shoes. “Our concept from the beginning has been to make footwear with really premium natural materials — from vegetable-tanned leathers to wood — that age beautifully with time,” she said. “There’s so much mass production today, but with our shoes, people feel they’re buying something genuine.”

Courtney Rotolo, footwear buyer for American Rag, which was among the first U.S. stores to carry the line, said that authenticity is a big part of the label’s appeal. “Their clogs look exactly like the clogs my mom is wearing in pictures from the 1960s and 1970s, the type of style you are forever on the lookout for in vintage shops,” Rotolo said. “We sell Swedish Hasbeens like crazy and have customers who come back season after season for new colors and styles.”

Clementine in Seattle also has a strong following for Hasbeens. “This is one brand that draws customers to our off-the-beaten-track location in west Seattle,” said owner Linda Walsh, noting that she also receives phone inquiries from consumers from all over the country. “There are a lot of people who love the comfort and height of a clog, but want something more stylish than [what is being offered by other brands].”

It’s loyal customers such as those who helped

propel the 4-year-old brand to more than $500,000 in sales last year, with at least 40,000 pairs shipped. To keep pace, the company has beefed up staff, and following the untimely passing last year of Neuman, it recruited a new CEO: Swedish fashion executive Martin Sjöström.

As the firm looks ahead, international expansion is a key focus, Blixt said. Hasbeens are sold in more than 22 countries, with the U.S. the biggest market, followed by Sweden. Europe and the U.K. are showing strong growth, and Hasbeens is now working with agents in Hong Kong and China to penetrate the Asian market.

The collaboration is an exciting milestone for Blixt, who never imagined her chance factory visit would turn into a global business. “When we started,” she said, “we just thought it would be a fun little side project, but it has grown into something much bigger.”