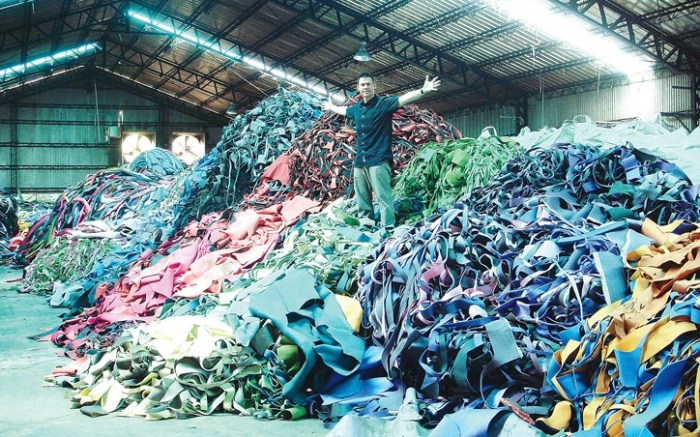 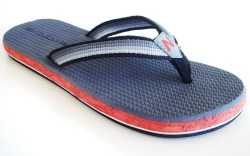 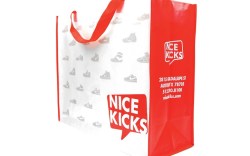 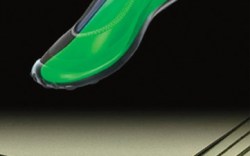 Ritter (below), an 18-year footwear veteran who has designed for companies such as The North Face, Reef, Teva and Simple, noticed enormous piles of EVA foam sheets on overseas factory floors, left over from punching out the midsoles of athletic and performance shoes. And because only a small percentage of EVA is reclaimed, the majority of those piles, Ritter knew, were destined for landfills or incinerators.

“It was sort of bad karma building up in our world,” he said.

So Ritter and business partner Jason Stanson founded PlusFoam to market a petroleum-based monomer, that, like EVA, can be formed into different densities. But unlike EVA, his firm’s TPE-based formula is infinitely reconstitutable: 100 percent of the scrap from manufacturing can be replasticized and used again with no loss of performance. (EVA and rubber can be recycled, but they have to be crumbled and infused into virgin material, and the amount of reground material is limited to 35 percent to 40 percent, although advances are made all the time.)

This new material’s ability to be formulated in different densities, Ritter said, makes it an alternative to EVA, blown rubber or TPU and TPR pieces. And unlike the other materials, PlusFoam generates no scrap. It’s also compatible with most current manufacturing processes; can be die cut, hot-press and cold-press compression molded; and used with standard molding machines. “The only things that changed are the technical parameters, such as the temperature or cycle time,” he said.

So far, one of the largest obstacles has been pricing, Ritter and Stanson said. “Two-and-a-half years ago, when we launched, cost was the main problem,” Ritter said. “Using EVA and rubber as benchmarks, [our product was] easily double the cost back then.” However, labor increases and other cost pressures throughout the industry have leveled the field, he said. “Now we’re only 10 percent or 20 percent premium, and if you factor in that it’s recyclable — if you’re using a sheet for a die-cut insole you can keep all of that cutting scrap — we’re darn near equal.”

The first products to use PlusFoam were flip-flops made by New Balance licensee Klone Lab (above) for fall ’10. Today, Ritter estimates 150 more firms are testing it in shoes, consumer electronics, computer notebook cases, dog toys, floor tiles and more. The next wave of products featuring the material should hit the market starting in fall ’12.

Also on the way: a reclamation process that allows consumers to send back used product to be recycled. PlusFoam is building its first reclamation center in Goleta, Calif., where the firm will wash, dry, separate and regrind product. “We don’t know yet what the extent of that can be, but we’re hoping it will offset our costs,” Ritter said. “But we’ve made it our marketing budget to support those reclaiming efforts. By running a back-end reclaim service that we fully run on [the brands’] behalf, we’re providing a marketing platform by letting them tout an environmental mantra that’s pretty compelling.”

Brand New Bag
Fresh on the heels of Puma’s “Clever Little Bag” rollout, Austin, Texas-based sneaker boutique Nice Kicks is getting into the game with its own reusable bags, which it hands out with in-store and online purchases. Nicekicks.com founder and storeowner Matt Halfhill said making a product that people would want to carry around was key. “We wanted it to be a fun design that people would use over and over,” he said. “Yeah, there’s branding for us with that, but everyone has a billion reusable bags now, and you only end up using one or two of them.” The bags, which are made of recycled PET, are covered with stenciled outlines of key sneaker silhouettes (Halfhill’s own creation), and fit the store’s very-specific size requirements. “[It had to be] big enough to hold at least two of our bigger shoeboxes and some clothing,” Halfhill said. The reusable totes, which debuted during the recent South by Southwest festival, have also been a positive green step for the store, he said. “We’re never going to get our [blog] readers to stop buying sneakers,” Halfhill said, “but let’s do something people can use this one time and in future times.”

Inner Workings
Who needs oil? Footwear companies keeping an eye on their petroleum-product content will have two new options when it comes to insoles in 2012. Amherst, Mass.-based OrthoLite will introduce a cushioning insole that replaces half of the petroleum-based polyurethane in its makeup with castor oil, a renewable resource. The new product, called Impressions, is being tested by athletic brands for cleated, running and basketball footwear, thanks to its breathable and anti-odor properties. And while the foam, which molds to the foot, is about 10 percent higher in cost than Lazy OrthoLite (a comparable insole made with PU), the cost difference when Impressions is used as the top layer of an insole is minimal, the company said. Impressions marks the second time the firm has tried to reduced its impact: In June 2009, OrthoLite launched the Eco Series, a casual-use product that replaced 20 percent of the PU with castor oil.

In related news, Poron is testing the second generation of its ReSource open-cell cushioning material (above). It will replace the initial formulation while maintaining the same durability and cushioning as the first generation, but with a slightly lower price, the company said. Launched in 2008 with 10 percent soy polyol and 10 percent reground scrap, the new version of ReSource will be made with a soy-based polyol that replaces 45 percent of petroleum-based materials.