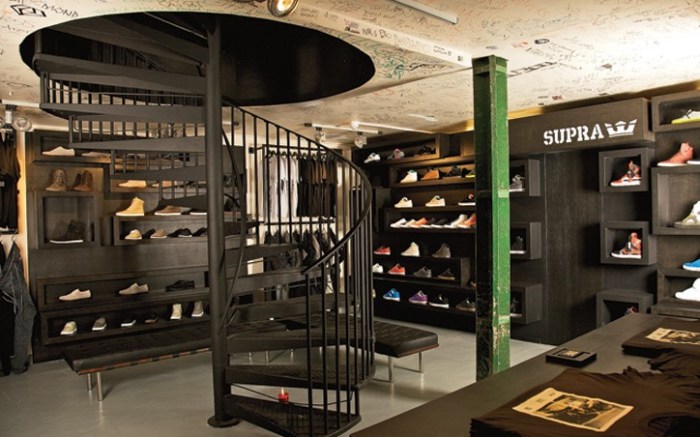 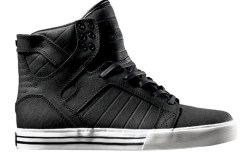 Since its founding in 2006, Supra has been known as many things: technical skate brand, celebrity style favorite and counterfeiter’s target. But in 2011, the brand’s leaders aim to grow Supra into the next great athletic footwear name.

Launched by One Distribution, a California-based company that had previously made a splash in the skate world with Kr3w apparel, Supra immediately became a favorite among technical skaters for its performance features. It also caught on among trendsetters such as Jay-Z, Lil’ Wayne and Justin Timberlake, who appreciated the sleek styling and distinctive silhouettes and materializations.

As a result, within five years, the brand has opened accounts in 50 countries, and sales have grown between 25 percent and 30 percent each year. (Supra’s sales are now four times higher than Kr3w’s.) Now Supra is seeking to go bigger.

“This year is a milestone for us, and not from a calendar perspective,” said Matt Fontana, VP of global brands and a streetwear industry veteran. “It’s the next evolution of the brand.”

Supra already has expanded its head count to 60 employees, adding key positions in design, sourcing, distribution and the executive ranks. Fontana, who joined One Distribution a year ago after stints at other streetwear and fashion brands — most notably New York retailer Alife — estimated that the brand has grown its staff by 50 percent in the past year. The design staff, in particular, has doubled to total four people. “It’s been all hands on deck for the past five years,” said Fontana. “We’re filling in the holes that any business our size needs to fill.”

But that’s just the tip of the iceberg. Supra launched an e-commerce site last month and moved from its former 45,000-sq.-ft. office space and distribution center in Santa Ana, Calif., to a new 65,000-sq.-ft. headquarters in Fountain Valley, Calif. And in February, One Distribution opened its first retail location, a one-year partnership for the basement space under legendary London retailer Slam City Skate, to showcase both Kr3w and Supra. On top of that, the sneaker brand has landed accounts including Nordstrom and Bloomingdale’s for 2011.

Supra also aims to expand its style count and go into new categories, Fontana said. “We probably have around 30 unique styles,” he said. “But [head designer] Josh Brubaker has a relatively insatiable appetite. We want to keep our distribution channels up to speed with his breadth of design.” To that end, the label is launching its first non-sneaker product in September, with two cold-weather boots: the $145 Douglas and the $165 Skyboot. Both styles, Brubaker said, feature waterproof leathers, tongue gussets and rubber soles. “It opens more doors and a whole new market to us,” he said.

And Supra is pushing the design envelope on its classics. This fall, it will debut the third version of the Skytop, a high-top that is one of its best-known styles. According to Brubaker, the shoe is a departure from the previous Skytop and the Skytop II. The new sneaker, which hits in July, reimagines the sleek, vulcanized shoe as a mid-cut style, with a cupsole construction and blown EVA midsole. “We really wanted something that had a 1990s technical feel,” Brubaker said. “We wanted to completely flip it and to not pigeonhole the shoe as the same thing again.”

Keeping product fresh will be key to Supra’s ability to grow, retailers said. Greg Grovey, manager of Austin, Texas-based sneaker shop Nice Kicks, said the brand’s evolution has won it fans inside the skate world and beyond. “It’s something new and fresh. They have been noticed by everyone,” he said. “And they’ve progressed since we started carrying them.”

For Karmaloop.com, the shoes have been a hit with both core skate shoppers and edgy, contemporary consumers, said founder and CEO Greg Selkoe. “Supra is a great performer,” he said. “It’s always one of our top-selling shoe brands.”

Of course, the move to grow beyond the core doesn’t always win fans. Some skate shops told Footwear News the styling wasn’t what they were looking for. “When we first started carrying them, they had a focus on skate-able shoes with a fashion-y twist, and they’re not doing that anymore,” said John Brandow, owner of Meta Skateboards in Boulder, Colo. “Now they seem to be catering to L.A. dudes.”

But that’s the price of a wider audience, said Selkoe.

“I haven’t seen any signs that it’s losing the skate customer,” he said. “It still has a sick skate team, and it’s a sister company with Kr3w, which is a skate apparel brand. Obviously, as you expand there’s risk, but you don’t want to be a one-trick pony. They can become a real sneaker company, one that goes beyond just the skate market.”

That’s a goal Supra is embracing. “We believe we’re the best skateboard sneaker company,” said Fontana. “We want to be the best independent footwear brand in the world.”