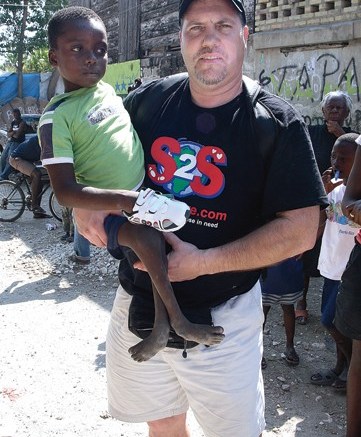 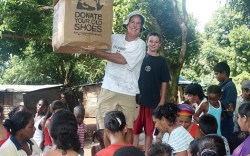 Every month Philip Cleary and his wife receive a steady flow of packages, each filled with at least one pair of used shoes.

The Clearys don’t need the shoes for themselves. Nor do they need them for a store or a Web business. Instead, the couple wants them for the tiny nonprofit they are growing, that ships footwear to people in need in poor countries.

Since forming Donate Your Old Shoes in 2007, the Clearys have sent 20,000 pairs to locals in places such as Nicaragua, the Philippines and Liberia. Sure, it’s rewarding work, but the couple said they have had to shell out massive amounts of personal money along the way. And the Clearys are never quite sure the shoes are arriving at the intended spot.

“Some of these third- or fourth-world countries have duties or laws against imported used clothing and shoes because of people selling them on the black market,” Philip Cleary said. “It’s difficult to get the shoes into these countries unless you partner with a local non-governmental organization or have connections that can get by the customs roadblocks.”

Still, such obstacles haven’t dampened the Clearys’ charitable spirit. In fact, there are dozens of under-the-radar people like them who have decided to try to give free shoes to others. But unlike the better-known, better-resourced organizations such as Soles4Souls, Toms Shoes and The Salvation Army, these individuals are finding the road to doing good isn’t so easy.

With a background in real estate, Cleary started Donate Your Old Shoes after a trip to Nicaragua, where he and his family saw children in the countryside without shoes. His original idea for the charity was to place collection bins throughout his home city of San Diego, but that turned out to be a daunting task to accomplish on his own.

“It was just too much work to go around and pick up all the shoes and take them to our mini-storage,” he said. “So for the last couple of years, we’ve just had the shoes shipped to us.”

But that turned out to be expensive. Cleary said his first shipment of shoes to Nicaragua cost him $3,000 and took several months to clear customs. Now he ships donated shoes through local churches and organizations.

Timothy Wampler, co-founder of Shoes 2 Share, said money is often a problem. “Like any nonprofit, creating consistent funding has been a challenge. Our challenge has been having enough people to execute our fundraising.”

Wampler’s Delaware-based organization, which has six full-time employees, collects new and used shoes for distribution to orphanages, hospitals, clinics and schools in the U.S., as well as in countries such as Haiti, Belize, Liberia, Kuwait, Uganda and Honduras.

The co-founder noted that securing financial donations from large companies has been difficult, thanks in large part to the rough economy.

“I hope corporations realize they might not be able to write huge grants anymore, but that there are still creative ways they can help,” Wampler said.

He suggested businesses can make a big difference by offering their trucks and distribution centers — even if there are little pockets of space — to aid in transporting donated cargo from several collection stations, which in turn would help save thousands of dollars in expenses for organizations like Shoes 2 Share. Wal-Mart Stores Inc. is one company that has volunteered a few trucks.

And while Shoes 2 Share is still working on building other relationships, Wampler said he is pleased with how the organization has grown since it was founded in 2004. “We have expanded at a pretty healthy pace,” he said. “Our bottom line is making sure we’re constantly moving forward with our mission of providing shoes for those in need.”

The idea for Shoes 2 Share began while Wampler and his wife were in the process of adopting two children from Haiti in 2003. During the ordeal, the couple took an emotional interest in the lack of basic footwear for Haiti’s citizens and began packing shoes in their suitcases on trips back and forth from the U.S.

Now the Wamplers send groups of volunteers to Haiti several times a year, and ramped up efforts after the 2010 earthquake.

No doubt finding sufficient connections and obtaining financial backing is tough work. But for nearly all startup charities, one of the highest hurdles is establishing credibility.

Few know that as well as Adam Levine.

The VP of operations for Shoes for the Cure, a for-profit organization, said his firm has struggled to get people to understand its exact mission. “The challenge for us is that we’re not a charity,” Levine said. “Our goal was not to create a charity, but rather to make money and give it to the organizations that really need it.”

Classifying itself as a recycling company, Shoes for the Cure collects used footwear throughout Florida and then sells it to thrift shops in the U.S. or overseas. Thirty percent of its profits are then given to organizations that host Shoes for the Cure’s free collection bins.

“We’re trying to create a business to support ourselves and support others,” he said.

Within the past year, Shoes for the Cure has raised nearly $10,000 for various causes, including SOS Children’s Village and the Palm Beach County school district.

“It’s been an amazing experience,” Levine said. “If you feel good about what you do, at the end of the day, you’ve got to be doing something right.”