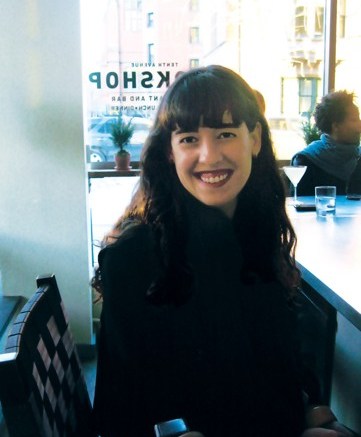 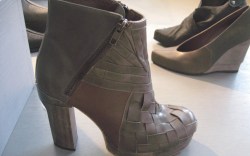 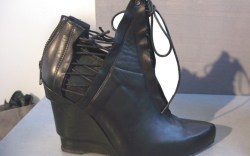 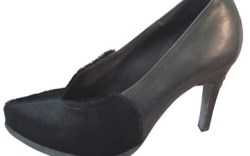 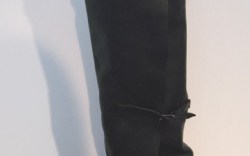 When I heard L.A. designer Tiffany Tuttle would be in New York, I was excited to nail down some time to chat, but it was a surprise bonus to pin her down for dinner in Paris, too. Though Tiffany is as relaxed and easy-going as it gets, her life moves at a fast clip.

The designer of LD Tuttle was in the Big Apple for the Doo.Ri, VPL and Complex Geometries shows, as she created the shoes for all three. After Fashion Week, she arranged to stay in town for eight days of sales. Then it was back to Los Angeles before heading to Paris for Premiere Classe and another sales campaign in a pop-up showroom shared with British footwear up-and-comers Bionda Castana and Michael Lewis, and other accessories designers.

Fall ’11 marks the second season Tiffany has worked with Doo.Ri to create runway shoes. “But it’s the first time we got to start early and really collaborate,” she says. Seated front row to witness their runway debut, Tiffany and I study the navy-and-cream thigh-high boots with fine straps and sheer sweater-like linings, and the graphite woven-leather ankle styles. “How high up are they?” I whisper, not able to discern the top. “Well, I definitely had to convince the factory to make them,” she admits. Tiffany says she met with Doo-Ri Chung last season to discuss this collection and they decided to work with the knit leather for a textured, feminine and slightly fragile look.

As for VPL by Victoria Bartlett, Tiffany doubled her effort, creating 10 footwear styles, five of which were showcased on the runway, including a soft leather bandage-wrapped ankle boot. The LD Tuttle for VPL shoes, which retail for $400 to $900, are sold at many of the same stores as LD Tuttle, including Barneys and Saks Fifth Avenue, along with Creatures of Comfort in New York and Los Angeles and Lagarconne.com.

Tiffany also has expanded her own line for fall. “I’ve been investing the time and money to do new things,” she says. The results? A pointy-toe last with low heel, clog-like wooden platforms and woven leathers with a parquet pattern, standout pieces in a collection inspired by Gothic cathedrals and cement bunkers on the coast of France. “I was playing with textures and layers for a collage feeling, and also looking at Brancusi sculptures. Fall is always the most fun for me but it’s weird living in Los Angeles,” explains the designer, who wears boots most of the time. As for how often she is actually in California? ”Never!” she exclaims, “Especially lately.”

The designer says she spent several years in New York but now enjoys living on the West Coast with her husband and business partner Richard Lidinsky (whose nickname is LD, hence the brand name). After the Doo.Ri show, we walk to Cookshop for wine and pizza and chat about California living. “There is a certain creative space there. You definitely have more time to think and more space to do your own thing. But the creative community is smaller, and fashion and art people tend to hang out together,” she explains.

The last and final stop on our New York tour is the Complex Geometries show at The Westside Gentleman’s Club, a strip club brimming with smoke from mist machines. Tiffany created the 1970s-inspired boots with custom-carved wooden platforms in collaboration with Canadian designer Clayton Evans, who started the unisex clothing line in 2006. After “a whole lot of back and forth with the heel maker,” Tiffany says, the pair came up with the jagged platform boots with stretch leather paneling. Tiffany, laughing, recalls the first prototype arriving in New York at her sister’s apartment and having to try it on for Clayton. “He told me he wanted to develop it in a large size for men, too,” she says.

Weeks later, and many miles from New York, Tiffany and I meet again for dinner at Paris’ Chez Janou, the famed home of the bottomless chocolate mousse bowl. Tiffany tells me, “I lived half a block from here during my work-study at Givenchy.” I note how at home she is in every city we meet in. The Princeton grad, who honed her skills at Givenchy and Rebecca Taylor before pursuing footwear design at Arts Sutoria, has also lived in Milan. The question of whether she speaks Italian is put to rest with “I speak fluently, as long as we are only speaking about shoes,” she jokes.

Though Tiffany has been working every day since November, juggling runway collaborations, freelance work for Eileen Fisher and her own collection, she is as chipper as ever and encourages me to come see her new Premiere Classe stand, custom built by friend-of-a-friend sculptor Romain Cattenoz. She also, to my surprise, wants to tackle even more work. “Eventually I’d love to do small leather goods. And gloves,” she says. “I have a crazy collection of old gloves, but I don’t get to wear them in Los Angeles, and I always forget to bring them on trips.”

And travel seems to be a trend in her life at the moment. It was through her work on Eileen Fisher shoes that she recently took her first trip to China. She recalled how one night, while having pizza there in a restaurant where the owner’s wife was singing on a small stage, girls were dancing on the bar and massages were being offered, it occurred to her, “My life is bizarre,” she says.

But no time to dwell on it. Tiffany continues to move forward, even venturing into short films, employing a contortionist and rhythmic gymnast for a fall ’10 video and working a foot fetish concept into a spring ’11 film. Both aim to provide a “how to” and, Tiffany says, “give an idea of what LD Tuttle is all about.”