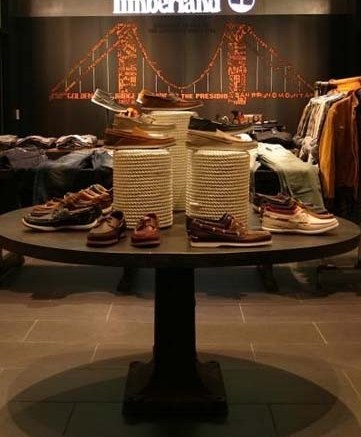 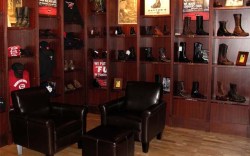 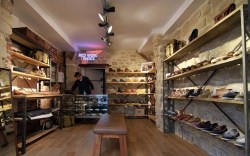 Timberland Bows Bi-Coastal Shops
The Timberland Co. is putting down roots on both coasts. Earlier this week, the brand opened its newest New York location, at 28 W. 34th St. The 4,400-sq.-ft. store features a décor that draws from the company’s sustainability initiatives, including reclaimed wood, industrial machinery used for table bases, recycled stoneware floor tiles, energy-efficient LED lighting and more. In late April, the company also bowed its first San Francisco-area location in nine years, at 845 Market St. With 2,300 square feet, the store features similar eco-friendly design elements. Timberland VP of retail and e-commerce John Pazzani said the company strives to open retail stores in cities with active, outdoor, lifestyle-oriented consumers. “Our vision does not leave out New York, which by sheer size has a broader consumer base and potentially millions of outdoor-minded consumers,” he said. “Whether it’s Herald Square in New York or Market Street in San Francisco, we’re there to offer consumers the Timberland gear they need for their next adventure.”

Weitzman Heads to the Hamptons
Stuart Weitzman is getting into the pop-up business. The designer label opened its first pop-up store on Wednesday in East Hampton, N.Y. The 1,600-sq.-ft. space at 53 The Circle will feature Weitzman’s footwear and handbags, as well as scarves and jewelry by Theodora & Callum, through Oct. 1. Weitzman President Wayne Kulkin said the goal of the project was to find a new and exciting way to connect with consumers. “Every brand has to evolve and show different faces,” he said. “This is a great way to energize all areas of our business, product, marketing and reaching out to a specific audience [in East Hampton]. Our [retail] strategy is to continue to have fun and [have a] unique store experience all over the world.” But why East Hampton? “Who doesn’t like to go there?” Kulkin said.

Ash Comes to America
Italian shoe and accessories label Ash debuted its first U.S. location on Wednesday following the success of boutique openings in England, France, Spain, Denmark, Italy, Tokyo, Greece, Australia and South Korea. The 2,300-sq.-ft. store, located at 44 Mercer St., stocks the men’s and women’s footwear, handbag and accessories collections. Later this summer, the store also will showcase the fall Ash Kids line. “We are thrilled to bring the Ash store to America,” co-founder Patrick Ithier said in a statement. “There is already such an amazing Ash brand identity in the U.S., and we are excited that our customers and fans will now have a flagship store location where they can go to shop.” In August, the brand is planning to open doors in Milan; Taipei, Taiwan; and Seoul, South Korea.

Dayton Boot Rolls Out New Concept
Dayton Boot Co.’s latest concept store debuted this month, and plans for additional doors in Calgary, Alberta; Toronto; London; and New York are already under way. The new shop, which opened in Vancouver’s historical Granville Island shopping district, will showcase Dayton’s complete line of boots for both men and women. Featuring hardwood floors and wooden shelves, the brand’s store design pays homage to its Canadian manufacturing facilities, and it will be rolled out to cities around the world over the next few years. “We expect to be in Calgary in late 2011, Toronto and London in 2012, and New York in 2013,” said Dayton President and CEO Stephen Encarnacao.

Royalcheese Debuts Footwear Store
Husband and wife team Nordine and Catherine Yousfi are betting that Paris is ready for a change in season. The couple, which owns five Royalcheese boutiques, recently bowed a dedicated shoe store at 129 Rue Vielle du Temple in Paris. Catherine said the timing worked out because Parisian men are returning to traditional styles. “At the moment, in Paris you see a lot of Vans [and] Nike, or French brands like Feiyue and Veja,” she said. “However, there is a definite return to [brown] shoes. A lot of brands like Schmoove and Swear are starting to move away from sneaker hybrid shoes to crepe/leather soles.”

Aetrex Enters Retail Biz
Aetrex Worldwide has debuted its first retail concept store, a 2,400-sq.-ft. flagship in Englewood, N.J. The location will showcase the brand’s complete footwear assortment, in addition to socks and its Lynco orthotics. Designed by architecture and design firm Gensler, the interior features private foot analysis and fitting areas. The company’s proprietary interactive technology, iStep Wave, a digital foot-scanning device, is also available to consumers on-site. Customers also can interact with one of two Aetrex Magic Tables, a touch-screen technology that provides education about the shoes. For tech-minded customers, a mobile POS technology by Apple speeds up the purchase process by allowing customers to pay with a credit card swipe.

Dann Goes Digital
Steven Dann, owner of the eponymous luxury accessories boutique in Great Neck, N.Y., is preparing to launch e-commerce the first week of June. “We got so many calls from all over the world,” Dann said of his decision to start Stevedann.com. He credited the acclaim to scoring styles by top designers like Giuseppe Zanotti, Casadei and Nancy Gonzalez. Zanotti recently designed two exclusive styles — a minimalist flat and a gold espadrille wedge — for Dann’s trunk show to benefit Sheba Hospital. “We’re blowing it out,” the retailer said of the styles’ success. As far as what brands will sell this fall, Dann admitted his allegiance still lies with Zanotti. “The collection is rich and luxurious,” he said. “Each style is so different and unique, it’s hard to pick just one favorite.”