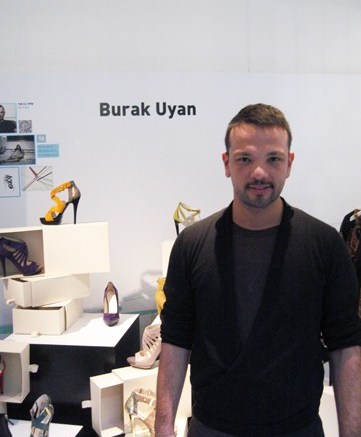 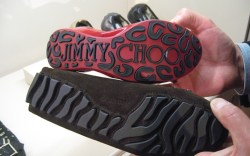 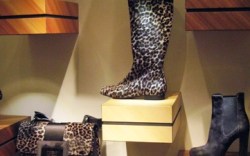 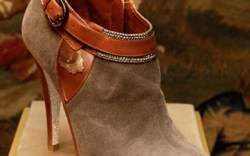 Young Guns
Shoe designers Burak Uyan and Georgia Turri were among the fresh talents tapped for Vogue Italia and Thecorner.com’s showcase of emerging talent, from Feb. 23-27.

With support from Yoox.com, the publishers chose 14 young designers from around the world for an event called “The Vogue Talents Corner.” Italian master designers including Giorgio Armani, Domenico Dolce and Stefano Gabbana, Roberto Cavalli, Alberta Ferretti and Donatella Versace also supported the event and attended the opening night cocktail party.

Uyan said he was grateful and excited to have been chosen for the project. “Each day has been better than the last,” he said. Uyan’s fall collection, inspired by architecture and shadows, incorporated intricate details and mixed exotic materials like llama and karung snakeskin. “There is a fantastic restaurant in Paris called Les Ombres with a glass roof, and the shadows created by outside architecture play on your skin, which inspired this collection.”

The exhibition gave retailers the opportunity to buy spring items from the showcased designers via interactive touch screens on the walls or on Thecorner.com.

Jimmy Choo has expanded its casual offering for fall, with suede wedge ankle boots and tall shearling-lined flat boots filling out the collection. The brand also launched a new signature ballet flat with hardware that features leopard lining and treads, and its new driving shoe sports a coordinating zebra lining and rubber sole. Both Jimmy Choo and Diego Dolcini added short motorcycle boots for fall, with the Jimmy Choo version in embossed croc and the Dolcini style in black pony hair.

Dolcini also added color-blocked suede day-to-night boots on a chunkier heel to round out his collection of colorful silk origami-inspired sandals, booties and pumps. He also introduced a lower heel, but said he was enthusiastic about his metal-heeled asymmetrical single-soled pumps and slingbacks. “People want something different, and this is very wearable, but not in a boring way,” he said.

René Caovilla also branched out for fall with more daywear styles, including an army-green corduroy boot with brown leather trim done in both knee-high and ankle versions. But the brand, which also showed a festive red, white and green crystal-studded story to commemorate 150 years of Italian unification, did not leave its evening roots too far behind: Caovilla unveiled plenty of glamorous sandals for fall.