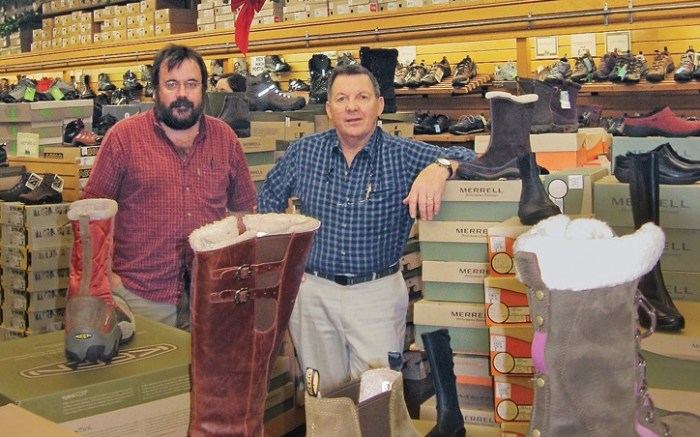 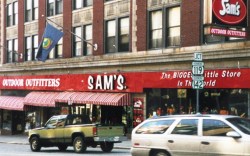 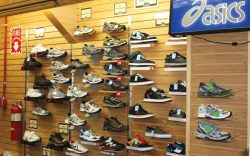 Sam’s Outdoor Outfitters keeps it all in the family.

Created in 1932 as an army-navy store by patriarch Sam Borofsky, today, the three-store outdoor retailer is run by his son, Stan “Pal” Borofsky (far right), and grandson Brad Borofsky (above left), who serve as VP and president, respectively. The store’s flagship — a sprawling 30,000-sq.-ft. space — is still located in Brattleboro, Vt., and the chain now operates two 10,000-sq.-ft. stores in Keene, N.H., and Hadley, Mass.

While Sam’s has been stocking footwear since the 1930s, the original location was very diverse. “As an army-navy store, we had everything: tobacco, antifreeze, toothpaste, appliances and TVs,” said Brad Borofsky. “It was quite a mixture.” Now, shoes represent roughly 25 percent of their business, which also includes apparel, accessories and hardgoods.

Borofsky said the Sam’s organization does more than $10 million a year in sales, with both smaller stores pulling in about two-thirds as much as the Brattleboro location. Due to the economy, that number has been flat for a couple of years, but signs point to an upswing, he said. The Right Mix Sam’s stocks hiking product, workboots, insulated boots for men and women, as well as a casual, athletic and skate shoes. Keen, Merrell, Salomon, Wolverine, Kamik, Asolo, Columbia, Timberland and The North Face are big sellers in outdoor, with brands like Chippewa (which Sam’s has carried since the 1940s) and Red Wing seeing growth in the work category. “We’re always trying to buy the next hot thing,” Borofsky said. “But it’s amazing how we still have a lot of the same brands that we had so long ago.” Women’s product — both technical and casual — has been a sales leader, a trend Borofsky predicted would continue. “We’ve been getting the most growth in the women’s arena in the past five to 10 years, especially in footwear. It’s an area where we have a lot of potential.”

Last summer saw some changes for Sam’s, when the store closed its location in Bellows Falls, Vt., and opened the shop in Hadley. “There’s more new-customer potential for us there,” Borofsky said. “[Hadley is] a very outdoorsy and active place.” It’s also a young area: Hadley is close to the five colleges (Smith, Amherst, Hampshire, University of Massachusetts at Amherst and Mount Holyoke). The location has been exceeding its planned sales since opening, he said.

Aesthetics haven’t always been Sam’s strong suit, Borofsky said. “If you were an army-navy store, you didn’t have to put in an amazing [interior].” The store is, however, known for at least one in-store amenity. Thanks to a popcorn machine, Borofsky said Sam’s gives away more than 2 tons of popcorn each year. Each location has had one since the early 1980s — though it can seem like longer. “The funny part is that now people remember eating popcorn [here] 20 years before we even put the machine in,” he said. “But it’s just another way to extend your hand to your customer and say, ‘You can stay as long as you want.’”

Borofsky noted that Sam’s staff of nearly 100 people helps the stores stand apart from bigger-box competitors in the same space. “We try to have really good people on the floor. Customer service is a huge part of our business,” he said. One element has been to make sure good employees stick around. Many of the company’s staff members are veterans of the store, Borofsky said.

Although every retailer worries about keeping the product mix fresh, Borofsky said sometimes Sam’s has to do a balancing act. “We’re always trying to bring in a younger customer, but at the same time, trying to maintain [what already works],” he said. “New England is a pretty traditional place, and some trends last longer here.”

The escalating cost of health care, combined with sales remaining level during the economic downturn, have been obstacles to the retailer’s commitment to keep long-term employees. “We just try to treat them fairly and keep them abreast of how we’re doing,” he said. “But they understand that we’re trying. We’re not sitting on our hands. We’re trying to make things better.”

The stores’ knowledgeable employees are Sam’s biggest advantage, vendors said. “Sam’s is an icon, the place to go for outdoor activities,” said Doug Snyder, the sales rep for Wolverine Outdoor who services the stores. “The employees are what they sell. They are not office people sitting at a desk. They are hunters, fishers and outdoorsmen who are knowledgeable and can explain things like Thinsulate.”

Kevin Morris, sales rep for Montreal-based Kamik, said, “[The stores are] very much in tune with what their customer wants, especially in regard to their selection of sporting goods and clothing. They’re great people, and they run great stores.”

Neighborhood vibe: Brattleboro, located in the Connecticut River Valley, is the oldest town in Vermont and features a robust downtown with restaurants, galleries and shops.

Customer base: The town’s location — near the highway but with direct access to hiking, fishing and mountain sports — serves a local base of outdoor enthusiasts.

Competition: Mall stores are close by, as well as other independent shops, although more can be found near Sam’s other locations.