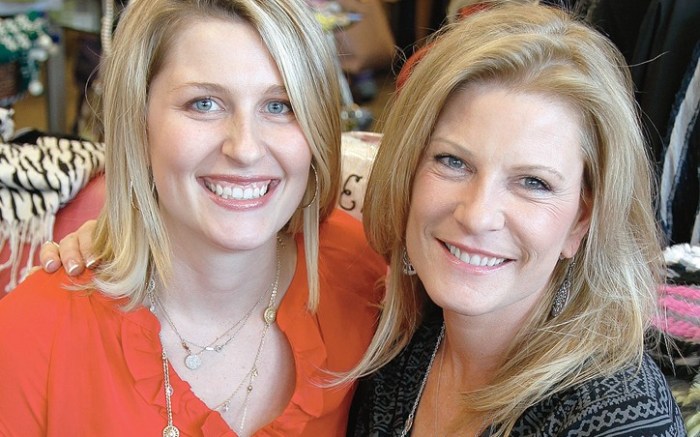 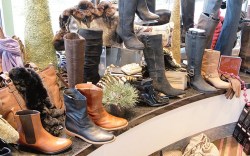 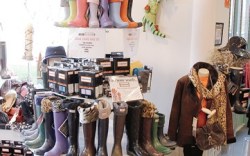 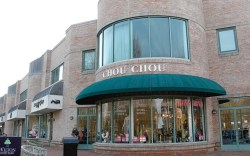 When owner Katharine Sanford opened Chou Chou in Wilton, Conn., in 2001, she wanted it to evoke a comfortable family environment.

“A lot of [our customers] are friends and family,” said Sanford, a former buyer at May Co., who named the store for the French term of endearment “mon petit chou” (or “my little cabbage”). “We know their kids; we’ve watched them grow up.”

In its early years, Chou Chou, pronounced “shoe shoe,” sold mainly stylish comfort footwear in the 1,000-sq.-ft. store. But business boomed when Sanford moved into a neighboring space three times the size in 2008, added ready-to-wear and brought on daughter Katie Sanford (near right, with her mother) as the shop’s buyer. In the last 18 months, the store has gained more than 2,000 new customers and is on track for $1.7 million in sales, up $200,000 over last year.

“People are mostly from Wilton, but some come from [nearby towns] New Canaan, Ridgefield and Westport,” said the younger Sanford. “We’re not trying to be Nordstrom or Macy’s, and our customers shop from us because we’re not Nordstrom or Macy’s.”

The Right Mix
Since leaving her banking job at J.P. Morgan, Katie Sanford has expanded Chou Chou’s merchandise to suit a broader age group through a range of price points and styles. “In terms of where we would want to shop if we went out as a family, [it would be] someplace where I can find something and my little sister can find something too,” she said.

Shoes and boots retail for $85 to $500 and make up about half the product mix. “A lot of high-end stores are really high end, [and] we’ve found with the recession that shoppers are not buying [in that range],” she said. “We haven’t lowered our prices, but we haven’t raised them either.” The store carries familiar brands such as Cole Haan, Hunter and Geox, and Sanford has brought on Kate Spade, Sam Edelman and Kors Michael Kors to appeal to a younger crowd.

“Something that’s got a little bit of comfort in it and has a 4-inch heel is going to be awesome,” she said.

Service Issues
Throughout the year, the store’s nooks feature suggestions for head-to-toe outfits. Apparel mingles with accessories and shoes. “We want to be accessible and easy,” Sanford said.

And the owners really went the extra mile during the holiday season to entice customers to shop. They extended store hours, offered gift wrapping and set up special displays with gift ideas starting at $20.

Promotional Strategies
When customers make bigger purchases, the store will occasionally throw in an added bonus, such as a complimentary scarf or bracelet. “We want to give our customers exactly what they want,” Sanford said. “If a person spends $600, she’s going to remember [the little gift].”

Sales are rare at Chou Chou, but discounts can be found in July and January. “We’re a full-priced store,” said Sanford. “We don’t get sale shoppers because when people want sales they go to the malls.”

Facing Challenges
Like many boutiques, Chou Chou struggles to compete with larger department stores that can offer significant markdowns. Retail sale days such as Black Friday and Cyber Monday make it especially difficult, said Sanford. “It’s hard in this environment to justify spending full price when a department store or website is offering a really big discount,” she said.

And though the Sanfords would like to franchise Chou Chou in the future, they currently lack the manpower required to run another location.

Feedback
Isabel Hostin, national sales manager for Ahhh … Andre Assous, praised the store for its selection. “It’s a unique retailer because it doesn’t just do accessories and apparel,” she said. “It’s a full-fledged shoe store.”

The store’s connection to its customers has been valuable for Cole Haan, said Faith Johnson, account executive for women’s accessories at the brand. “Katharine tailors our product for her clientele,” she said. “She personally styles every customer who walks through the doors and makes our product look special and unique.”

The Wilton Scene
Neighborhood vibe: Wilton is a 15-minute drive north of Norwalk, Conn., and an hour away from New York. The suburban neighborhood, which has a walkable downtown, includes an independent hardware store, Starbucks and an Italian restaurant.

Customer base: The store attracts women ages 35 to 50, who are often shopping with their daughters. Competition: Chou Chou’s primary competition is nearby Entes Shoe Salon, which carries Stuart Weitzman, Donald J Pliner and Ugg.