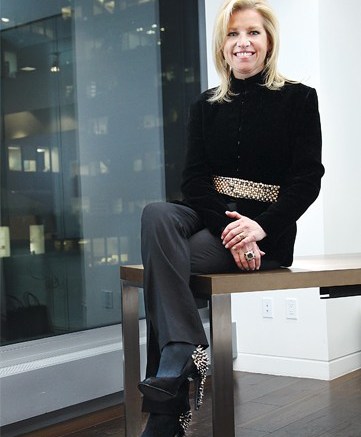 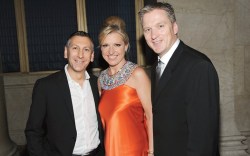 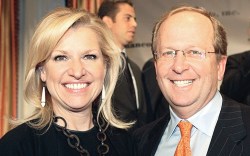 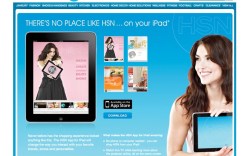 NEW YORK — “I have to tell you about my shoes!”

Sporting a pair of spiked black Sam Edelman peep-toe pumps, HSN CEO Mindy Grossman excitedly recalls the first time she saw them in the designer’s showroom. “I told him I had to have them,” Grossman said. But when she tried them on, they seemed a bit “heavy.”

“You’re showing your age,” Edelman quipped at the time.

That comment was enough to persuade Grossman. “To spite him, I said, ‘I’m going to wear these.’”

Sitting in HSN’s glossy New York office, the CEO — and bona fide shoe lover — is focused on the expanding footwear business. The category has been a star performer for HSN, whose total sales grew 10 percent to $708.4 million in the third quarter.

“We really think footwear, within our fashion category, is and will continue to be one of our fastest-growing businesses,” Grossman said. “I know the emotional relationship women have with shoes. … I can relate.”

Shoes will be in the spotlight again later this month when HSN launches its first 18-hour footwear event, which will include brands such as Steven by Steve Madden, Me Too, Beverly Feldman and Foot Petals. Madden and Feldman will appear live on air.

And in May, the channel will debut a 24-hour event with labels such as Sam Edelman, Libby Edelman, Pour La Victoire, Poetic Licence and Matt Bernson, among others.

Bernson, who has worked with HSN for more than a year, first met Grossman four months ago and was immediately impressed.

“Mindy is an articulate leader, and she has an eye for trends. She understands her audience and finds brands and personalities that will work,” he said.

In addition to growing the channel with well-known designers, Grossman has also attracted celebrity names, including Iman, Molly Sims and, most recently, Mariah Carey — all of whom sell their fashion or accessory lines on the network.

The CEO also is connecting HSN to Hollywood through special programs such as last summer’s “Eat, Pray, Love” initiative, which launched across all platforms. Clips of the movie were shown on TV, while brands, personalities and products appeared on air to illustrate the locales in Italy, India and Bali, where the movie was set.

HSN also launched a movie trailer microsite online, and a 12-page travel-themed journal was sent to customers in the mail to showcase the event.

After strong reviews, the company will explore similar opportunities this year.

“The event was highly successful, and you will absolutely see more events, entertainment, music collaborations and creative programming throughout 2011,” said Grossman.

Behind the scenes, the exec is courting consumers with new mobile programs like the recent iPad app launch. “Mobile is [one of] our fastest-growing business, and it’s where we are putting a lot of investment,” Grossman said.

“Mindy understands how to platform ideas and drive those to the consumer through the right channels,” Rubel said. “She is always on a quest for something new and has a passion for innovation.”

FN: It’s been about a year since we last spoke. How has your strategy changed?
MG: It’s less about a full-scale change and more about the ultimate strategy to evolve as a lifestyle [business] where we can communicate stories, product, trends and the personalities behind them. [We can bring things to life] across many different platforms, and we think the categories that lend themselves to that are fashion, beauty, culinary and any new technology business.

FN: Footwear has certainly been a standout for HSN in the past 12 months. Why is that?
MG: There are a number of reasons. You have an incredibly robust portfolio of great brands and designers that are either in the business or have footwear as an extension of a broader brand. And everything from contemporary to designer, comfort to toning and everything in between [is performing well]. Then there’s the incredible opportunity to expose the real emerging talent, people like Matt Bernson. It’s not necessarily about only the well-known brands but the idea of discovery.

FN: What major footwear initiatives are in the works for this year?
MG: We have an 18-hour [shoe] sale in February and the big 24-hour sale on-air in May, but you’ll also be seeing more ways to articulate footwear online and through mobile. We’ve created these 360-degree views where you can click and see runway shots online with the product, or see the footwear with a crop pant, a long pant and a skirt. Ultimately, I’d love to have a separate footwear app, and we’re working on different things like that. So part of [the focus] is brands and design, part of it is events, and part of it is applications that showcase the product.

FN: How does HSN stand out in a crowded environment?
MG: I love the storytelling aspect of what we do. It makes us unique. For example, Steven by Steve Madden was an immediate success … [because Steve] is a cult figure — he’s engaging and he’s fun. The brands have a venue to articulate their stories in [95 million] homes, or on mobile devices. [It’s] both a marketing and commerce opportunity.

FN: How do you find new talent?
MG: We’re certainly introduced to many personalities [who would be a good fit]. I’ll use Twiggy as an example. I met Barbara Hulanicki, [creator of the Biba brand], and Twiggy was one of her close friends. So I met Twiggy and her husband, and by the end of lunch, I said, “We’re launching Twiggy London.” We [also] have a fashion director and a buying team that go into the marketplace and identify brands that have a unique point of view and that will connect with our customer.

FN: Are you concerned that too many celebrity lines are flooding the marketplace?
MG: We don’t do celebrities for the sake of a celebrity. We’re pretty judicious in who we will and won’t work with. They have to have passion for who they are, and what they want to convey has to be very real. And they really have to be people who will flourish within our culture.

FN: Who is the HSN customer today?
MG: We’re 85 percent women. We’ve done a very good job over the past year growing our best customers. These women shop with us eight times a year or more. After they buy one or two times, we entice them to buy more with online marketing and social networking efforts.

FN: Are you trying to reach out to more men?
MG: No. At the end of the day, you have to decide who you are. [But in certain categories] — culinary, for example — we are more broad-based from a gender standpoint than we are in fashion. If I’m doing a 24-hour cooking event, I attract customers who are passionate about [cooking]. I’m not marketing to women.

FN: What is your sweet spot in terms of price point?
MG: We want to have a diversity of price points within a category. For example, if studded shoes are the trend, then I want to have studded shoes at $79, at $129, at $199 and at $300. I’ll let the customer access that trend on her own terms. We like to use the [slogan] “We are not a luxury brand,” and we like to define [HSN] as accessible.

FN: You just launched an iPad app. How important is the mobile channel overall?
MG: Mobile is [one of] our fastest-growing businesses, and it’s where we are putting a lot of investments. [But] you just can’t take [a website] and put it on a phone. You have to look at devices and how people are going to use them. [With] mobile, you can be more playful and a little bit more personalized. That’s why we stream live, high-definition video on TV, on the iPhone and the iPad. Blackberry is going to be coming out with its tablet sometime in the second quarter, and that’s another exciting opportunity.

FN: With all these new platform choices, will people continue to shop on television?
MG: Convergence of your devices is really the future. You have to make sure your brand experience is consistent throughout these platforms. People are still watching television just as they are online. [Consumers] just want to be able to interface, so you’ll be online on the TV, and you’ll be on the phone watching it.

FN: How does social networking factor in to your marketing strategy?
MG: That’s another big focus for us within the next year. In addition to the traditional social networking sites, we have our own community boards within HSN where customers are very engaged.

FN: Turning to broader issues, do you think the economy is bouncing back?
MG: The American consumer inherently wants to spend, so there is re-engagement, but the reality is that we are still not in a robust environment. [But] people want to look forward more than backward. They are tired of the oppression of negativity.

FN: How challenging has it been to operate a public company in difficult economic times?
MG: We went public in August 2008, so that timing was not [ideal]. But it’s about understanding how to stay focused on the long term. I’m lucky that I worked for [public] companies such as Nike Inc. and Polo Ralph Lauren Corp. They have been able to transcend decades and get stronger and stronger. They have a long-term view and the ability to be relevant every year.

FN: What else, specifically, did you learn at Nike?
MG: You are seeing a lot of focus on consumer behavior and marketing strategies in our fashion and beauty segments, so the benefit of being at Nike for six years was working with a cool, but professional in-the-zone marketing [strategy]. That has definitely helped us at HSN.

FN: What is it like to be one of the only female CEOs in an industry dominated by male executives at the top?
MG: I’m really fortunate to be where I am, and I don’t take the responsibility lightly. I never really felt that being a woman held me back because I never thought of myself as just a woman. I always saw myself as a businessperson. [But] I believe diversity drives innovation.

FN: You’ve brought HSN a long way since you arrived four years ago. Where will the company be in another four years?
MG: I don’t look at it in terms of numbers. I’ve never gotten up in front of my organization and said, “I want to be big.” We want to continue to have an impact on the consumer and the marketplace. We certainly want to be a [firm] that is looked at as a growth company that can add value, and I want to be the [brand] that [has everyone wondering], “What are they going to do next?”