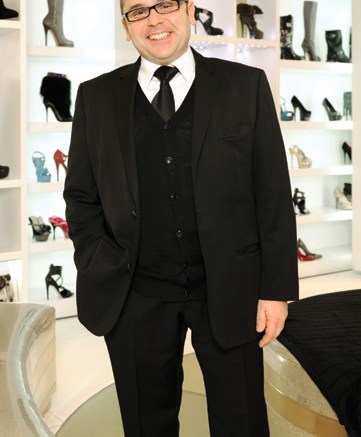 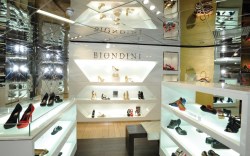 Owner Patrick Melloul, 50, sells about 30 top shoe brands, a mix of ready-to-wear labels, including Alexander McQueen, Valentino, Fendi, Rochas, Lanvin and Chloé, as well as shoe brands such as Giuseppe Zanotti and Casadei. “Only luxury shoes, no entry-level product,” he said. “And I buy deeply into collections.”

In addition to running two multibrand Biondini stores and a Gianmarco Lorenzi branded store — all located in turn-of-the-century shopping arcades or “galleries” off the Avenue des Champs-Élysées — Melloul has become a key luxury footwear player in Galeries Lafayette, where for six years he has had a Biondini branded shoe boutique, which carries Chloé, Dolce & Gabbana, Azzedine Alaïa and YSL.

He also oversees the department store’s shop-in-shops of Giuseppe Zanotti, Stuart Weitzman and Marc by Marc Jacobs, as well as a small, 59-sq.-ft. space devoted to Ralph Lauren footwear.

And at the end of February, a 25-sq.-ft. Biondini space will open on the first floor of Left Bank department store Le Bon Marché. It will sell only five brands: YSL, Azzedine Alaïa, Valentino, Giuseppe Zanotti and Gianvito Rossi.

The Galeries Lafayette expansion, as well as the new 164-sq.-ft. Gianmarco Lorenzi franchise store that bowed on the Champs-Élysées in April last year, have helped Melloul achieve sales of 10 million euros (or $13.4 million at current exchange) in 2010, up from 6 million euros (or $8.1 million) in 2009. Over the next two to three years, he expects sales to grow to 15 million euros (or $20.1 million).

E-commerce also is growing fast for the firm and now accounts for 10 percent to 15 percent of annual sales. Since the beginning, London-based Farfetch.com has built, managed and operated the site. “Biondini has been a phenomenal partner to Farfetch.com,” said the site’s founder and CEO, Jose Neves. “Biondini’s shoe-buying acumen is unparalleled, and together we have been very successful online. Biondini’s fast expansion online and offline speaks for itself, especially in such a difficult and competitive market.”

Here, Melloul discusses exciting new brands and his competition in the high-end market.

FN: What have you learned in the 25 years since Biondini’s founding?
PM: A lot has changed in the world of shoes. Selling [independent] creators such as Rodolphe Menudier, Diego Dolcini, Michel Vivien and Michel Perry worked in the 1990s, but it doesn’t work today. The taste of the customer has changed, and the market has changed. Now customers come because they see big names such as Lanvin, YSL and McQueen. They might not necessarily buy them, but [that’s what] pulls them in.

FN: In light of the poor global economy, how has the high-end footwear business changed?
PM: The recession has been very difficult. But I believe in my business and have remained upscale. I didn’t change my selection or my price points, and I invested in new brands such as Fendi and bought more deeply into Lanvin. I believe the future is with couture because they are secure companies that have invested in brand building. Women still come to us, but instead of buying five pairs of shoes, they buy three. Rich women spend upwards of 1,000 euros [or about $1,340] on a pair of shoes, but now these shoes have to be versatile and work day and night.

FN: Most of your stores are near the Champs-Élysées. Who is your main customer there?
PM: I don’t have many Parisian customers. Instead, it’s 100 percent tourists, including French tourists who aren’t from Paris. Italians come here, and there are many people who have homes here, including Arabs and Africans.

FN: Are there any new brands you’ve added that you are especially excited about?
PM: Santoni, which is designed by Edmundo Castillo, and Don Ciccillo, designed by Francesco Graffei.

FN: Who is your competition?
PM: I don’t have direct competition. It’s more the big ready-to-wear brands with their own stores. These are brands that I carry and brands I don’t, such as Chanel and Louis Vuitton.

FN: Have you implemented any new marketing initiatives recently?
PM: I sell all the big brands, and they all communicate their brands’ images very effectively and want to control their images. For this reason, I don’t do any advertising or marketing.

FN: What has been the biggest challenge of operating such a multifaceted business?
PM: The difficulty is that since I have built up the department store side of the business, I have lost a little of the identity of my own stores. I want to concentrate on my own stores next. It’s important to improve our purchasing power with couture brands and to plan some projects, such as the idea of a concept store somewhere on Rue Saint-Honoré, Champs-Élysées or Avenue Montaigne.

FN: Do you have the desire to break into other global markets?
PM: I wouldn’t open Biondini stores outside of Paris [in France], but maybe in another major city — London or New York.