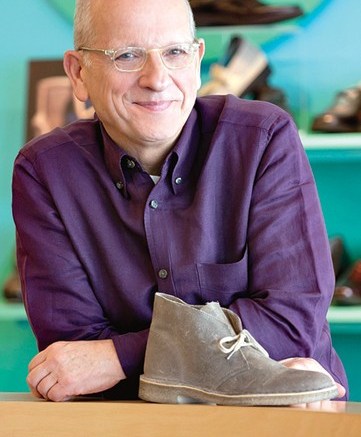 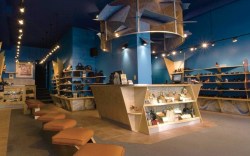 When he opened his first store in Philadelphia 20 years ago, Benjamin Lovell wanted to sell consumers more comfortable shoes for navigating the city. With his background as a Clarks executive, Lovell jumped on the comfort movement early, successfully turning his single store into a five-unit chain that today includes locations in neighboring suburbs Glen Mills, Pa., and Haddonfield, N.J.

But comfort wasn’t always an easy sell. He recalled the early 1990s, when he was forced to sprinkle in fashion lines such as Via Spiga to provide shoppers with some eye candy. “It gave the store a pop behind which we could sell comfort shoes,” Lovell said, adding that fashionable comfort footwear is now much easier to find.

Remaining hands-on has been key to the chain’s success. It’s a lesson Lovell learned with the opening of a sixth store in Baltimore in 2006 that he is now in the process of closing. “It never worked,” he said. “It’s too far away from our home base to check on everything.”

And as full retirement looms closer, Lovell, 60, has turned day-to-day operations over to CEO John Holden. The extra time has allowed Lovell to pursue his other passion: acting in regional theater. But he will always remember retailing fondly. “I miss the excitement of looking at shoes on a daily basis,” he said.

Here, Lovell looks back on his two decades in footwear and shares some of the wisdom he’s passing on to the next generation of retail leaders.

FN: If you were starting out today, is there anything you’d do different?
BL: We would’ve built vendor partnerships much earlier. Originally, I was fiercely independent. I ignored the idea. The best vendors give us co-op, markdown money and help train our staff. John Holden is much more commercial than I was. I was very good at finding the great shoe, but he’s more practical.

FN: How do you balance being both an urban and suburban retailer?
BL: In the city, you have a lot of traffic going through the stores. You’ve got people [just] browsing. They might come in twice a week, so you need to show them new product. In the suburban stores, you may get 10 or 20 customers a day. You’ve got to do a lot of work to sell them one, two or three pairs of shoes. However, if they’ve bothered to come out, they’re [more likely to be] serious shoppers.

FN: Lately, where have you seen the biggest shift in consumer buying?
BL: Twenty years ago, the comfort category had just started. We were selling shoes to teachers and nurses and anyone on their feet all day. We were also selling Taryn Rose and very expensive shoes to that [higher-end] customer. We also had a middle-range customer. We were selling a lot of shoes at $200 to people who were using credit cards. Suddenly, they couldn’t pay off the [cards]. That consumer seems to have disappeared. Fortunately, [companies such as] Clarks and H.H. Brown produce shoes at $110 and $120, which our customers have been buying.

FN: Ugg continues to be a must-have brand. Have you ever experienced a similar phenomenon before?
BL: In 1993 and 1994, we were hugely dependent on the Dr. Martens 1460 lace-up boot and the Birkenstock Arizona. When they [eventually] went away, the comfort business took over and we went with brands like Mephisto, Wolky and Naot. This time, we’re buying more boots from other people, so if Ugg does drop, we’ve got others to take over.

FN: Is the wellness category here to stay?
BL: The whole MBT thing is extraordinary. People [think if footwear] is technologically advanced it will change their lives. I believe [wellness] will always be a part of the comfort business. And we’ve been able to sell good-looking, comfortable shoes on the back of it.

FN: Women account for the majority of sales. How can you get men to buy more?
BL: [By offering] more stylish shoes. We are selling shoes from H.H. Brown’s Vintage Shoe Co., and they’ve sparked some interest. We do very well with Clarks’ Unstructured. When I first started [in business], it was 60 percent women’s and 40 percent men’s. Now [men] have taken their money and gone in another direction. All you have to do is look in an Apple store and see where they’re spending their money.

FN: What is your most effective marketing tool?
BL: NPR has been very good for us. This [audience] is our customer big time. Also we have Facebook relationships and print ads in Philadelphia Magazine and some of the weekly newspapers. We do an occasional e-mail blast to our best customers.

FN: Who is your biggest competitor?
BL: Nordstrom. We’ve got two in the area, and we’re just about to get another one. And Zappos.com is really controlling [online sales]. To a certain extent, vendor stores [are competition]. If a vendor opens a store near us, we buy fewer of those shoes.

FN: Will the Internet ever completely take the place of brick-and-mortar shoe shopping?
BL: No, shoes are very tactile. People like to look at them and pick them up. We’ve got a little bit of an e-commerce business. It’s a service to our customer, [and] this year we’re seeking to expand it. Zappos is taking away some of our business. Not on specialty shoes, but on regular shoes. If people know they need a pair of Dansko Professionals in a size 38, they can go to Zappos and get a pair. But they’ll always come to us for that hot-pink wedge.

FN: What’s the most important lesson you’ve passed on to John Holden and the team at Benjamin Lovell?
BL: I got this from an old shoe dog: If you went into a stockroom and you saw a pile of $20 bills on the shelf, you’d pick it up and put it in your wallet. So if there’s a shoe that’s not selling, [it’s like wasted money]. Mark it down. Send it back. Do whatever. You do not want to leave any inventory lying around if it’s not performing. And guess what? If you’re sick of looking at it, the customer is, too.