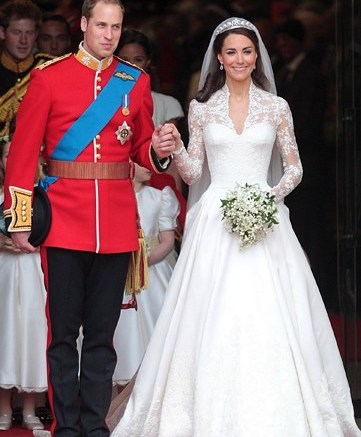 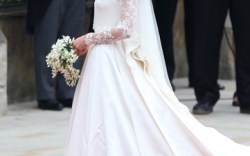 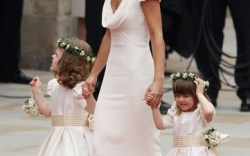 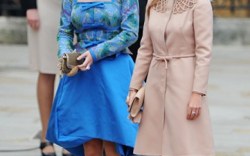 It was a triumph for British design as Catherine Middleton, now Her Royal Highness the Duchess of Cambridge, wed Prince William Friday morning in a gown and shoes by Londoner Sarah Burton for the house of Alexander McQueen.

And shoe designers had much praise for the elegant ivory ensemble, comprising a dress made of Chantilly lace and silk tulle, and duchesse satin pumps with lace hand- made and embroidered by London’s Royal School of Needlework.

British shoe designer Georgina Goodman said she was thrilled that Burton was responsible for the designs.

“Sarah is an amazing person, a close personal friend and most importantly a wonderfully sensitive designer,” said Goodman.

“She and the House of McQueen were the ideal choice for a modern woman who wants to honor British heritage. After all, Alexander McQueen has always been the master of quintessential British style and craftsmanship.”

Shara Levy, founder of TheAisleNewYork.com, said Burton’s traditional closed-toe design was tasteful and appropriate for the royal affair, and will likely set off a new trend in bridal footwear.

“When she stepped out of the carriage and you saw the satin classic pump with lace detail, it completed the look. She couldn’t have been more regal,” said Levy. “We will definitely consider getting similar shoes [to sell on the site] anticipating girls will want to emulate her.”

Meanwhile, bridal shoe maven Aruna Seth, who said she was in talks with the palace to design the Princess’ shoes weeks before the wedding, was wistful her design wasn’t chosen in the end.

“It would have been nice if she chose a shoe designer,” Seth told FN over the phone from London. But she’s keeping her fingers crossed her designs may still show up at the evening reception.

“[Maid of Honor] Pippa [Middleton] picked up a selection of styles [for the reception] so we’re still waiting to hear,” Seth said, adding they will likely be colorful with embellishments.

Other notable British shoe designers made appearances at the wedding held in London’s Westminster Abbey – on the feet of various members of royalty.

Jimmy Choo was the clear choice for Prince Charles’ wife Camilla Parker Bowles, as well as Princesses Beatrice and Eugenie. All chose classic pointy-toe pumps from the London-based designer.