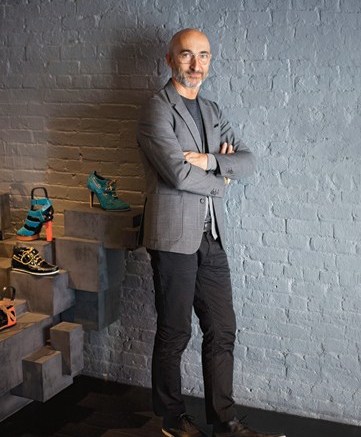 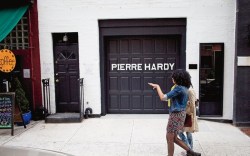 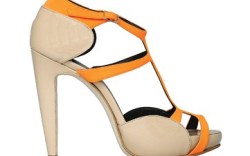 On a bright June evening, Pierre Hardy is holding court on the rooftop of his West Village store in New York, nestled on quaint, tree-lined Jane Street.

The designer is in town to show off his colorful, whimsical resort collection and check out his just-completed digs. While the boutique opened its doors in December, the finishing touches have just been put on its second-floor office space and showroom.

“It was a long project and it took a long time to find the right place,” Hardy said of the space, which reflects the designer’s signature aesthetic: a juxtaposition of classic design with contemporary flair. “I’m learning every day here. [The store allows] me to approach customers in a different way.”

The shop also has given Hardy another foothold in New York, where he is also sold at Jeffrey and Barneys. And it’s the first step in expanding his retail concept beyond Paris. (His first boutique opened in the Jardins du Palais Royal in 2003 and a second bowed in the city’s Left Bank in 2009.) London, Los Angeles, Tokyo and Moscow are targeted cities for new shops over the next five years.

The Frenchman, who launched his eponymous brand 12 years ago, also has been expanding on the wholesale front. Growing distribution in major U.S. cities such as Los Angeles, San Francisco, Chicago, Boston and Dallas is a priority, while Hardy also sees opportunity in the U.K., China, Russia and the United Arab Emirates.

Retailers are bullish on Hardy’s business as well, in large part because he’s managed to maintain a strong point of view and exclusive feel.

“[Pierre Hardy shoes] are distinctive for being both sculptural and graphic, [and] it would be hard to mistake his designs for anyone else’s,” said Holli Rogers, buying director at Net-a-porter.com, which launched the designer’s shoes for spring ’11. “He is not driven by trends, yet his collections feel absolutely current and relevant.”

“The shoes are little pieces of artwork, and he has really perfected the use of mixed materials,” added Daniella Vitale, chief merchant and EVP at Barneys New York, where the line has been carried since 2004. “Pierre Hardy is selective about distribution and seems to be planning his growth very carefully.”

Outside of his core line, Hardy continues to head footwear and jewelry design at Hermès, where he’s worked for 20 years. He also collaborates with Nicolas Ghesquière at Balenciaga to churn out show-stopping runway styles, such as this season’s pointy-toe booties with black-and-white paisley ankle bands and a stiletto heel.

Next up on the collaboration front: a project with a luxury carmaker.

While Hardy said it was too soon to reveal details, he plans to design a shoe based on automotive technology. “I love cars, and it’s a different technology and environment,” the designer said. “It’s fun to think of shoes in a whole new context.”

You’ve been spending a lot of time in New York lately. What are the biggest differences you’ve noticed between consumers here and in Paris?
PH: The girls here are really strong. They go for [pop]. In Paris, they are more measured and discrete, except for those clients who love the edgy, edgy looks. [For the most part, though] women in New York are more curious and open to the strong pieces. They dress up a little bit more, too, and when they dress up they really dress up. I love that.

Your West Village store has gotten a lot of attention. How did you go about designing the space?
PH: I prepared by showing the architects pictures of the Paris boutique, [photos from] some minimalist artists I love [and] some of the apartments or houses where I used to live. There has to be some intimacy in the shop, [as well as] spectacular dimension. It has [to act] like a stage in a way.

Give us a taste of the spring ’12 line. What will be new and different?
PH: It’s very solar. I love the summer mood, probably because I’m from Corsica. Part of it is very graphic and geometric, with lines, angles, grids in vivid colors, such as cyan, geranium and turquoise. But part of it is sporty with large straps and buckles, summery shades of leather and exotic skins. We’ll [also] feature a few new styles, such as very light flats for high summer, a new version of a driving shoe, espadrilles executed in a seaside spirit and even a new athletic style, a unisex runner.

Has expanding into more casual looks allowed you to reach a broader audience?
PH: The separation between dressy and not dressy is a little bit old-fashioned. [Now] people pass from one side to another regardless of the rules or the codes. The prices are a little bit lower [with] the casual collections, [but] it is still quite exclusive and not really mass market.

You’ve also been growing your men’s offering, which now accounts for 35 percent of the business. How do you approach designing for men?
PH: With men, [in general], there are the classic shoes and the very edgy shoes. I’m not keen on fantasy shoes for men, [so] I try to find a balance. It has to be something different and not so obviously “fashion fashion.” Elegance for men is always related to somebody — somebody you knew or a figure you admire. When you remember those characters, they’re rarely eccentric and are usually classic.

What are the biggest challenges in juggling your namesake collection with your roles at Hermès and Balenciaga?
PH: I never feel like I work too much. Sometimes the schedule is hectic, but I don’t feel it’s a burden.

What are the biggest lessons you’ve learned at these houses?
PH: [You have] to create a unique collection while still respecting the identity of each brand. The history and the style of each house is so specific. That’s what I love: The demands are never the same. At Hermès, I learned how to respect the materials and the sense of quality. [Working with] Balenciaga and Nicolas Ghesquière is a non-stop surprise [as you] accompany him on his always-new ideas.

On the other end of the spectrum, you collaborated with Gap for three years. What was the biggest challenge in designing for a large, mass-market retailer?
PH: Not betraying my own image and aesthetic. I tried to think of the essence of Gap — casual, young, carefree, California, the late 1960s and early ’70s — and then translate it into my own language. [I like] putting myself in a different position and reconsidering what I do. So when I come back to my own collection, I’ve learned something.

Launching lower-priced, contemporary lines has been popular among luxury brands lately. Would you consider such a move?
PH: Not now. It [means] different shops, different customers and a totally different market. It’s a whole other job, and I’m not ready for that.

Would you ever sell part of your brand?
PH: No. Since the beginning we have been really profitable. If I can do it by myself, I’ll do it. We operate alone, and it’s fine. Finding a partner would be more about [having someone run the business], [but] it’s not a necessity right now.