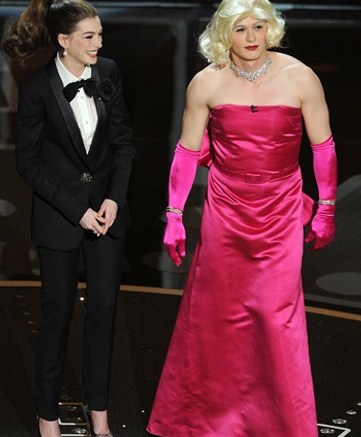 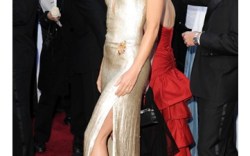 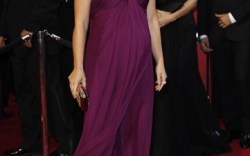 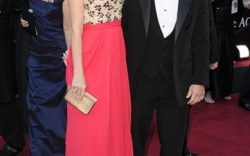 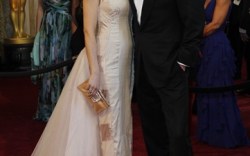 While the night may best be remembered for two of the youngest hosts in history and Melissa Leo’s F-bomb, footwear also made a bold statement at Sunday’s 83rd Annual Academy Awards.

Co-host Anne Hathaway (with “127 Hours” Best Actor nominee James Franco) gave the crowd one of the most memorable shoe moments while performing a musical number in a tuxedo and Brian Atwood pumps embellished with more than 8,000 Swarovski crystals.

The designer was a favorite for the evening, with Gwyneth Paltrow (“Country Strong”) and Mandy Moore (“Tangled”) donning metallic styles for their Best Original Song performances. While Paltrow wore Atwood’s ankle-strap peep-toe pumps, she shifted to red-sole king Christian Louboutin for the Vanity Fair after-party, where she caught up with pals Jude Law and Cameron Diaz, who wore Brian Atwood booties to the soiree.

Supporting Actress nominees Hailee Steinfeld (“True Grit”) and Amy Adams (“The Fighter”) chose Salvatore Ferragamo, both opting for satin looks in cream and black, respectively. But 15-year-old Steinfeld had a back-up plan in mind and paired red Converse sneakers with her Marchesa gown for the Vanity Fair after-party.

Controversial nominee Melissa Leo (“The Fighter”), meanwhile, channeled Oscar with a pair of gold T-strap platform heels. And, apparently, it worked. Leo, who drew criticism for publishing an ad campaign to drum up votes, walked away with the Best Supporting Actress award.

The always-eccentric Helena Bonham Carter turned her fashion picks into an homage to the industry, wearing a gown created by costume designer Colleen Atwood, who took home an Oscar for her work on “Alice in Wonderland.” Despite her relatively unassuming black bustier dress, Carter still had a few surprises up her gown. The actress, nominated for her role in “The King’s Speech,” hung a British flag from a red garter around her leg.

To round out the evening, Best Actress nominee Nicole Kidman (“Rabbit Hole”) donned a pair of peep-toe heels by Pierre Hardy in a red hue, while Helen Mirren chose Sergio Rossi platforms and E! network commentator Kelly Osbourne sported a look by Casadei. Presenters Halle Berry and Scarlett Johansson both opted for styles by Louboutin.