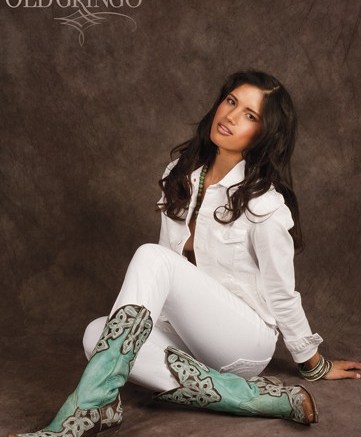 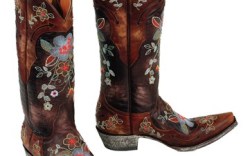 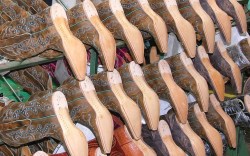 Old Gringo has saddled up and taken its Western appeal mainstream.

The brand, founded by leather-goods veteran Ernie Tarut and fourth-generation shoemaker Yan Ferry, has built a business on its handcrafted, artisan boots and is now parlaying that success into more fashionable channels.

“Women realize that having a pair of Western boots they can be proud of is good for their wardrobes,” said Tarut. “We make [our boots] the old way, but it’s also about the look, and that’s a big part of why we’re selling so well in the fashion world right now.”

Since launching in 2000, the Chula Vista, Calif.-based label has accumulated more than 500 accounts, spanning some of the country’s better-known Western shops and more fashion-oriented stores such as Neiman Marcus, Nordstrom, The Tannery in Boston and high-end independents across Europe. In fact, said Tarut, 60 percent of the accounts are in the fashion segment, a testament to the changing face of the Western consumer.

“The typical Western customer has gotten a little more hip and wants more edge,” he said. “We work with rodeo stars who want a cool boot to go with their $500 shirts and Seven for All Mankind jeans. [But] we’ve also noticed [we’ve gained] a wider overall acceptance in the footwear industry [as being more than just] a cowboy boot company.”

To accommodate growth, the company also has expanded to more than 250 employees, many of whom are artisan bootmakers, and expanded its Leon, Mexico-based factory from a single 8,000-sq.-ft. facility to a campus with more than 40,000 square feet of production space.

Looks from the core Old Gringo line retail for $400 to $1,500 and feature ornate details with tooling or overlay trims on traditional Western silhouettes, as well as more fashion-forward styles. Each year, Ferry, who serves as design director, proposes as many as 6,000 new SKUs, about 20 percent of which make it into the collection.

Handcrafting each boot takes as many as 165 steps, and that, combined with the brand’s use of colorful embroidery, distressed leathers and weathered hardware, has hit a chord with retailers.

“The quality and design is so unique, and the craftsmanship and fit is really incredible, ” said Tarek Hassan, co-owner of The Tannery in Boston, which has been carrying the label for eight years. “Every season they push the envelope and they don’t cut corners. That’s the beauty of it. You want to buy it, wear it and save it.”

“The boots have real ‘wow’ power, [and] it’s brought so much diversity [to the store],” she said of the nearly 50 styles Scarpaletto carries. “I’m surprised at how easily that Pliner gal can become an Old Gringo gal. It’s really the same customer, [just wanting] to show off a different side.”

Now, Old Gringo is looking for ways to cast an even wider net.

Plans are in the works to launch a lower-priced collection, called OG by Old Gringo, for fall ’12. The line is meant for customers who want the brand’s signature finishes but with fashionable features such as higher heels, zipper closures and slimmer silhouettes. It could retail for between $250 and $450, Ferry said, and pave the way for new accounts and expand its business with existing clients, including Nordstrom and Zappos.com.

“It’s a different concept [for the brand]. It will be fashion boots with a Western twist, rather than Western boots with a fashion twist,” he said, noting that the OG boots wouldn’t include as much handwork as the core line. “It would allow us to lower costs and open up the pyramid of customers.”

Though more than 90 percent of Old Gringo product, which includes handbags and leather vests and jackets, is targeted to the women’s market, Tarut also wants to expand the men’s offering and take it into more doors. Within the next five years, he said, men’s could make up about 30 percent of the core business.

Branded retail and a New York showroom also are priorities, as Old Gringo looks for a Soho space that could accommodate both. Plans call for opening the flagship space by the year’s end and bowing a second boutique within two years. By 2016, Tarut would like to have four Old Gringo stores in the U.S. and another three shops in Europe.

“You can control what the public sees and create a better demand [with a store],” he said. “It would give us an edge.”