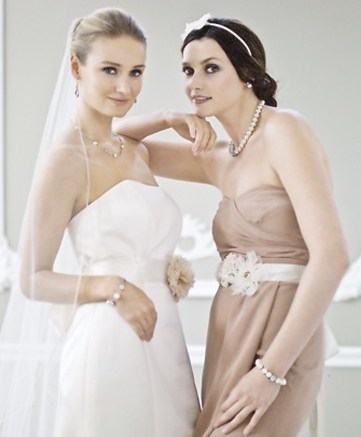 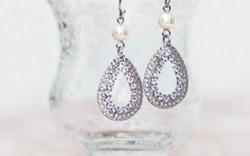 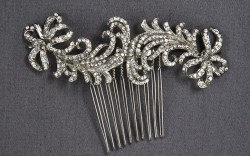 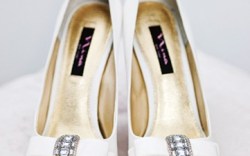 Nina Footwear has its something new.

Already one of the most in-demand brands for special-occasion footwear, the New York-based company now has formally stepped into the world of weddings with Nina Bridal. The collection, which launched softly at FN Platform in February and made its official debut at the National Bridal Market in Chicago yesterday, expands beyond shoes and handbags with jewelry, sashes, decorative headpieces and veils.

“It takes the brand in a great direction and is a very big step,” said Nina CEO Scott Silverstein, whose father and uncle co-founded the company in 1953. “It’s a wide-open opportunity for us to create a new benchmark [and] is something we expect to have out there for a very long time.”

Staying true to Nina’s heritage of creating evening footwear for the entire wedding party — spanning the bride, her mother, bridesmaids and flower girls — the new collection encompasses “essentially everything but the dress,” said Kerry Magnusson, the brand’s director of bridal merchandising.

The idea, Magnusson explained, is to create an entire accessories line under one name to make it easier on bridal retailers. Typically, she said, buyers have to go to one brand for veils, another for jewelry and a third for sashes and other items.

“We’re a one-stop shop, and that’s a big part of our strategy,” she said, noting the entire offering is designed in-house. “We’re pulling together a [full] collection under one brand, and I’m not sure anyone else is doing that.”

Among the line’s standouts are filigree chandelier earrings, embroidered veils and crystal-embellished headbands and novelty T-shirts, which will hit stores in May. Prices range from $25 for glass pearl earrings to $1,000 for French Alençon lace veils.

“We’re first and foremost a footwear company, [so] it’s my job to take cues from [those] collections,” said Magnusson, who has previously worked for Claire’s Accessories and Payless ShoeSource and was tapped by Nina late last year to create the line. “Whatever treatments are going into the shoes, whether it’s stonework or bows, I try to match [it].”

Silverstein said he expected Nina Bridal to represent between 10 percent and 15 percent of the company’s overall business within the first three years.

With an existing list of retailers that includes Lord & Taylor, Macy’s, Belk, Bon-Ton and Zappos.com, Nina has a built-in starting point for the collection, but it also has targeted new buyers and departments.

“Nina is a progressive company that is grabbing white space in a niche business,” said Ginny Johnson, VP and DMM of accessories at Belk, which has picked up the jewelry collection. “[The company] has established brand recognition in [special-occasion] footwear, and this resonates with the customer.”

Lord & Taylor, which unveiled a bridal salon in its newly renovated Fifth Avenue flagship in New York last fall, has since put a bigger emphasis on wedding dresses, footwear and accessories and has bought heavily into the Nina Bridal assortment with a mix of headpieces, veils, sashes, jewelry and novelty T-shirts.

“The line will help us round out our offerings and provide customers with a full-service bridal shopping experience,” said Liz Rodbell, EVP of merchandising. “[It] really does complement the footwear offering, maintains a similar aesthetic [and] enables [our customer] to finish her look with luxury accessories at a value.”

The new collection also paves the way for Nina to begin attending bridal expos, including this week’s New York International Bridal show. And the brand will begin to cater to retailers in the channel. In fact, Silverstein predicted the collection could eventually be sold in 300 to 400 bridal boutiques nationwide.

Bella Bridesmaid, which specializes in wedding accessories and attire, exclusively sells Nina footwear and has picked up the new offering for all its 40 franchised doors. The collection, said founder Bridget Brown — who also runs the San Francisco flagship — allows wedding parties to get brand-name accessories at an accessible price.

“The big thing that Nina brings is brand recognition,” she said. “If a girl has a budget of $1,500 for her wedding dress, she doesn’t have $500 to spend on a couture headpiece, so this is perfect.”

The chain also has partnered with Nina to debut the accessories collection at the same time Prince William and Kate Middleton say “I do” later this month. The stores will hold a week-long promotion leading up to the royal wedding, hosting trunk shows and offering a discount of 15 percent.

Internationally, Nina is targeting the more than 20 countries where its footwear already is sold, including Canada, Australia, Austria, Turkey and Chile. The next big push, Silverstein said, will be the Asian market.

Ideas for expanding the product line have included lingerie, giftables and a larger collection of apparel to sit alongside the playful T-shirts, which read “Off the Market,” “Last Night Out” and “Mrs.”

“We’ll redefine ourselves with each season [and] stay on top of any ways to better serve the bridal party,” Magnusson said, “ [but] it is all so much fun. I catch myself wanting to do a million different things.”