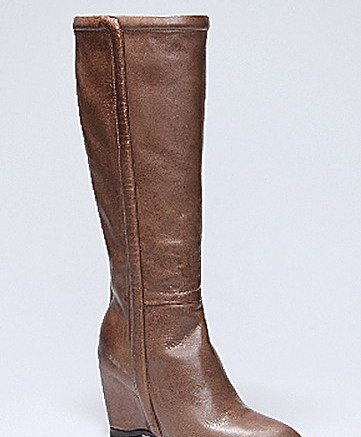 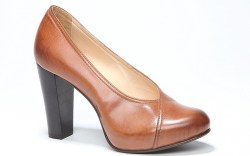 NEW YORK ­— After more than 15 years as a boutique owner, Michael Jolley has crossed over to the other side.

The former owner of Moda, a clothing and shoe store in Portland, Ore., that closed in 2001, Jolley is the creative force behind the new Michael Jolie brand, a collection of Italian-made women’s footwear debuting for fall ’11 following a small and limited launch for spring.

Joining Jolley in the venture is seasoned shoe exec Michael Geller, who oversees the operations side of the business, and his daughter, Amanda Geller, who serves as president. Michael Geller spent 20 years at Andrew Geller, the footwear firm founded by his great-uncle, and also has held top posts at Nordstrom, Tod’s, Buckray and Intershoe.

Targeted to higher-end consumers, the Michael Jolie collection focuses on sleek casual styles, ranging from tall boots with hidden wedges to platform pumps and chunky heeled lace-up booties. Materials include hand-rubbed leather, stretch suede and wool, and dual-tone hand-sprayed patent. “My vision is to create shoes that look good with jeans,” Jolley said. “Women today live in their jeans and want a shoe that can elevate their look.”

Despite the higher costs, the Portland-based company is committed to producing its shoes in Italy. “I’ve always believed that the Italians are the best shoe makers in the world. We want to continue that legacy,” Jolley said.

The brand’s fall collection retails from $350 to $375 for shoes, and from $395 to $725 for boots. “We’re trying to fill that gap between the salon lines and the high-end designer lines, but we’re providing high-end designer quality,” Jolley said.

As a start-up competing against mostly China-made collections, Michael Jolie’s Italian manufacturing position is “both a challenge and an opportunity,” Michael Geller said.

“It’s certainly not easy trying to produce in Italy when most of the market has migrated to China, but it makes our collection unique,” he said. “There’s a customer out there who appreciates the quality and craftsmanship of an Italian-made shoe. And we’re delivering that at a great price.”

Distribution for Michael Jolie is focused on better independents. The brand is in about 20 boutiques around the country, including Tani in New York, Zelda’s Shoe Bar in Portland and Romp in San Luis Obispo, Calif.

Katie Dow, sales and marketing manager for Zelda’s, said the line is already a favorite with customers. “The shoes are exceptionally well-made,” she said. “The fit is fantastic, the colors and leathers are gorgeous, and the heel heights are just right.” She added that the brand’s made-in-Italy pedigree is a strong selling point. “Our customers care about quality and certainly prefer shoes made in Italy or Spain.”

Once Michael Jolie establishes a solid track record at retail with top boutiques like Zelda’s, Geller said, it will seek to break into department stores such as Nordstrom and Saks Fifth Avenue.

Still, Jolley noted, the company will be careful not to overdistribute, recalling how his years as a retailer taught him the importance of new and exclusive resources. “If customers are spending that kind of money, they don’t want to see the shoes in every store,” he said. “They want to feel like they’re getting something special, something different. We want to be that something.”