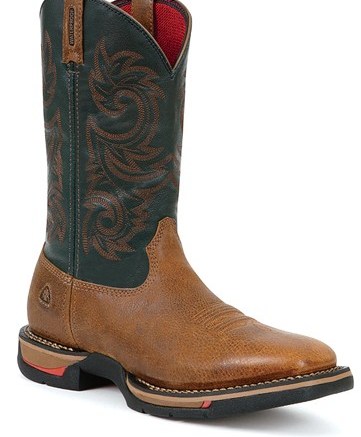 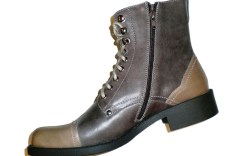 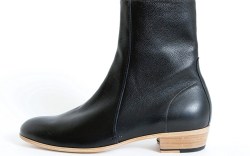 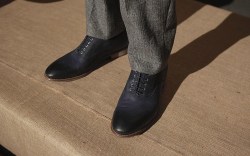 Second Act
Designer Todd Welsh is once again putting his stamp on a line of men’s footwear. The new brand, Todd Welsh New York, a division of the Eastman Group in New York, is set to bow for fall ’11 with a series of fashion-forward looks. According to Welsh, the collection is a sharp departure from his original dress shoe line, which was on the market until 2008. “These are a casual approach to denim, but with fashion elements,” said Welsh. The series of shoes and boots are targeted at a young fashion crowd and are priced from $59 to $79. Department stores and shoe chains will carry the line starting in August.

Activity Time
This fall, Nelsonville, Ohio-based Rocky will launch Long Range, a series of welted men’s shoes that cross four market segments: outdoor, work, Western and duty. The entire series features the X Peak Performance System, including removable footbeds with dual-density cushioning and air-flow chambers; and the trademarked Stabili-Shank for arch support and edge-to-edge stability. For added safety, the rubber outsoles come with nonslip center lugs in varying depths. The Expansion Fit Seam also is exclusive to the collection and offers easy access while maintaining a snug fit around the ankle. Select styles feature a waterproof construction. Set to retail from $140 to $200, several Western looks will begin to hit retail stores this month. A companion apparel line is also in the works.

Three of a Kind
Men’s and women’s apparel label Shipley & Halmos will debut men’s footwear for fall ’11. The collection consists of three handmade styles: a Beatle boot, a military-inspired lace-up boot and a classic oxford. The Lucien oxford, which will carry over from season to season, features a contrast stacked leather heel and comes in washed black and camel cow leather, navy nubuck and drum-dyed chocolate. The seven-hole Raymond lace-front boot is detailed with nickel lace hooks and heavy-gauge stitching for added reinforcement. The Jack side-zip Beatle boot (above) has a textured kidskin upper and is available in black and caramel brown. Retail prices range from $325 for Lucien, $445 for Raymond and $495 for Jack.

Field Trip
British brand Bespoken, which recently set up headquarters in New York, will launch shoes for fall ’11. Taking inspiration from field boots worn by cavalry officers in WWI, the label worked closely with the team at Kurt Geiger to develop three men’s styles: Derby, a nubuck oxford (at right); Duster, a waxed chukka boot; and Burt, a utility boot. All three styles are made in Italy, and prices are $335 for Duster, $395 for Derby and $450 for Burt. Materials include burnished grain leather and rough waxed cow suede. The shoes will be sold at Liberty, Harrods, Selfridges and U.S. accounts.