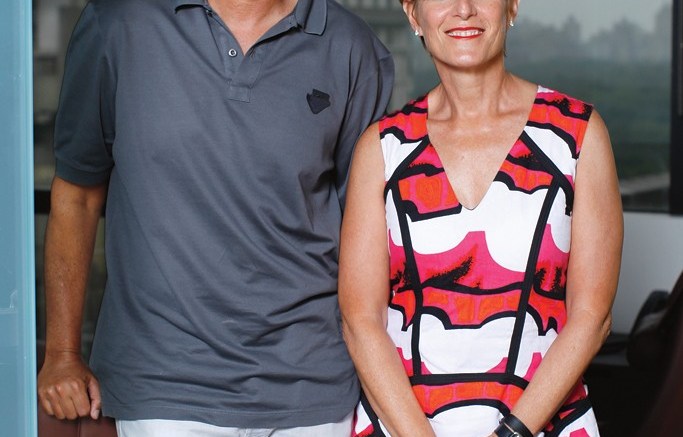 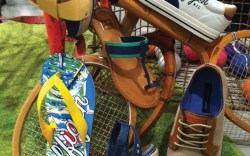 In the last few months alone, the company has inked a new venture with Tommy Hilfiger to produce its footwear, expanded its Ivanka Trump lineup and retooled its Sigerson Morrison and Belle lines, which will be in stores for spring ’12.

The latter two, which saw their original designers depart in March, incorporate more fashion, a trendier vibe and a slightly lower price point, and will target the “cool” shopper rather than the “hot” one, the firm’s execs said.

“Nothing is ruled out. We’re just in the restart, refresh mode,” said founder and CEO Marc Fisher, adding that the plan is to achieve a 30 percent to 35 percent increase in sales next year for both lines.

The company also wants to step up its men’s and casual businesses, both of which are opportunities to grow the overall top line.

“We’re working very seriously on sneakers for many of our brands, and on different types of casual footwear,” said the firm’s president, Susan Itzkowitz. “We talk about expanding classifications, and this is one of the ways we are [doing it].”

Marc Fisher Footwear already manufactures more than a million pairs of shoes a year, and Fisher noted that the Hilfiger license, which is largely a men’s business, will allow the firm to even out revenue from the men’s and women’s categories.

“We think there is an opening for another couple of [existing] brands in men’s, to really insert some fashion [into the product],” explained Itzkowitz.

The duo also wants to expand the company’s footprint overseas, since one of its largest and longstanding licenses, Guess, has a successful international business that makes up more than half of the brand’s total revenue.

Asia is one market where Guess has significantly expanded its shoe business over the past several years.

According to Nash Benjamin, CEO of its southeast Asian partner, FJ Benjamin Holdings Ltd., sales of Guess and Guess by Marciano footwear have grown about 20 percent each year since they obtained the license in 2007.

Itzkowitz said the firm will leverage the global expertise it has gleaned from Guess.

How has the recent economic volatility impacted your outlook for the rest of the year?
Susan Itzkowitz: After the great response at FFANY, we are optimistic about all of our businesses going forward. That being said, we are also realistic and prepared for any economic swings. We’ve seen this before in recent history and still believe the consumer will buy fashionable shoes that offer him or her great quality and value. As in past difficult economic times, history has shown that lipstick sales rose because people wanted a quick pick-me-up. We believe footwear can have the same impact.

How well-equipped are you to handle the cost and price changes in the industry right now?
Marc Fisher: I don’t think it’s realistic to expect shoe prices to stay stagnant forever. The higher costs turn out to be a good thing for us because sourcing has always been our No. 1 expertise, so we know how to maneuver in these situations. We have a sourcing office in China with about 75 experienced people. We understand what we need to do without sacrificing the quality. What happened in the last 18 months [was] a lot of people, [in order] to maintain prices and margins, went to different factory bases, which then couldn’t deliver the product, and companies got horrible quality that they never anticipated. A lot of people are raising prices 5 to 10 percent and lowering quality at the same time, so it’s like a double whammy. But our goal is to have the best value at any price, whether it’s $59 or $99. That’s the trick. We’re not focused on sourcing issues. We’re focused every day on pricing, being competitive and having the right value.

SI: We’re focused on what the consumer’s looking for and how we give it to her at a price she’s going to be able to pay. We realized that sourcing, manufacturing and the whole product design function is really parallel to building a successful business.

What’s your advice to smaller companies that are trying to survive in this environment?
MF: Everything in China has changed, [so being] small doesn’t cut it. It’s always good to get new, young, creative companies to start because [the industry is] like a flower [that’s] got to keep re-budding. Unfortunately, looking forward [to] the next two years, a small company isn’t going to have much of a chance. There are going to be a lot of small companies that [probably will] drop out of it. There will be more consolidation in the industry, for sure.

How has the new Tommy Hilfiger license enhanced your portfolio?
SI: We thought Tommy was a great opportunity for our company for a few reasons. The brand is [going through a great revival, and] it doesn’t conflict with any of the other brands we have. It’s a very casual brand, and a very large part of it is men’s, which gives us a great opportunity in our men’s business. Plus, it’s just fun, very wearable, very understandable, nothing complicated.

MF: We don’t really have a preppy brand. Tommy Hilfiger is like the total opposite of Guess. It’s two different customers, it’s two different lifestyles, and our goal is to have different brands that give us different growth opportunities without cannibalizing one of our existing brands.

Sigerson Morrison and Belle are also big priorities. How are you refreshing those labels?
SI: We hired a new design team, including Taylor Tomasi Hill. [The Marie Claire style and accessories director joined as creative consultant to work with the labels in terms of trend direction.] We’re expanding classifications and being very specific and careful with price points. Belle has a definite perspective and chicness to it, but at the same time it has to be somewhat affordable within the realm of that business. [That means bringing prices down] to a certain degree. With Belle, our price points will be $195 to $250, which is a little bit less than they were before, but within the ballpark. We’re going to be doing a lot with social media to [support the revamp] and we’re going for a whole facelift with our website, which will be up probably by the end of January. And we’ll be mobile-ready.

Ivanka Trump launched last year to much fanfare. How do you plan to develop that label?
SI: Ivanka is really looking to make her brand into a lifestyle brand, [comprising everything from handbags to apparel]. But it started with footwear. Our success [there] helped to establish her, and as the product continues to sell and as we continue to expand classifications, we’ll have a huge opportunity. She is a great spokesperson [who] has a great aesthetic. She’ll pop down to talk to a customer; she’ll pop down to try on shoes; she’ll pop down to give opinions. [So] the halo effect from her building her brand will also help.