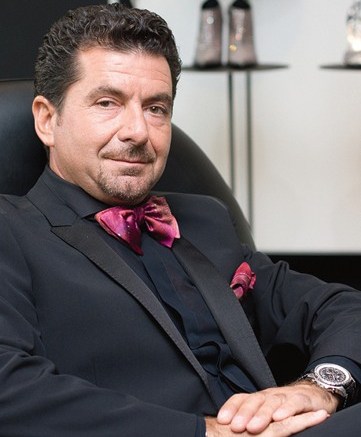 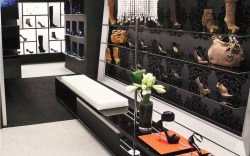 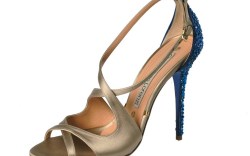 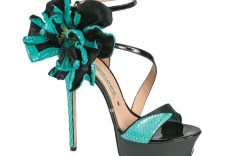 Known for its vertiginous styles — with heels that sometimes reach 6 1/2 inches — the 35-year-old brand has seen business blossom, even in the midst of a tough global economy.

And the celebrity following is there, as well. A-listers including Beyoncé Knowles, Jennifer Lopez, Angelina Jolie, Demi Moore and Rihanna have all become fans of the collection, which uses ultra-luxe materials, such as Swarovski crystals, python, fur, natural gemstones, 24-carat gold, silver, titanium and soft leathers. (The brand’s celebrity clientele often sports the limited-edition Black Label, with prices of $1,900 and individually numbered shoes presented in black satin-lined boxes.)

The company’s upward trajectory kicked into high gear in 2006, when it opened a showroom on Via Montenapoleone and appointed former Versace exec Stella Molino as commercial director. Since then, it has debuted 10 franchise stores in London; Moscow; Dubai, United Arab Emirates; St. Petersburg, Russia; and Jeddah, Saudi Arabia.

“The concentration on retail has proved, in our case, to be the best strategy,” said 54-year-old designer Gianni Renzi, who owns the brand with his two brothers, Marco and Renzo.

“Gianmarco Lorenzi is our top brand in terms of sell-through in the Biondini stores,” said Melloul, who has been offering the brand since 1986, averaging sales of 3,000 pairs a year. “Customers look for Gianmarco Lorenzi because it is glamorous and very comfortable, even though the heel is very high. Gianni wants to make shoes as comfortable as possible, and there are innovations every season.”

Next up, the brand’s first store in Milan is set to open in the city’s Golden Triangle retail center in the first quarter of 2011. “It’s the realization of a dream to consolidate the brand in my own country,” said the designer, who added that he is in talks with a U.S. partner to bow a store in Manhattan later this year. “This will help push the business in the U.S.” Additional future locations in the American market could include Las Vegas, Los Angeles and Miami. And the company just signed a deal to open nine stores in China over a three-year period.

Gregory’s has sold the brand since 2006. “Not only are [the shoes] stunning, but they are comfortable as well,” said Jon Harris, owner of the Dallas- and Las Vegas-based boutiques. “The shoes are hand-lasted, thus being properly engineered to ensure the perfect fit. Gianmarco Lorenzi provides spectacular high heels that feel much lower than [they are]. Our No. 1 shoe from Lorenzi is the Disco Ball that retails for almost $3,000, and we have sold more than 100 units in the last year. It’s amazing.”

The brand showed at Premiere Classe for the first time in October, and Renzi said it also would exhibit at U.S. trade shows once the flagship store opens there.

And though Gianmarco Lorenzi found early success in Germany with a lone offering of skinny heels, today Russia and other Eastern European countries are the brand’s prime markets. (Sales there represent 65 percent of total revenue for the company.) “[That’s] where girls wear high heels from 7 a.m. to 11 p.m.,” he said.

Renzi added: “With very high heels they can’t just work aesthetically; they have to be comfortable, too. For me, comfort is a priority. Without it, a woman will lose her smile. I want a woman to come home wearing her shoes at the end of the evening, not come home holding the shoes in her hands.”