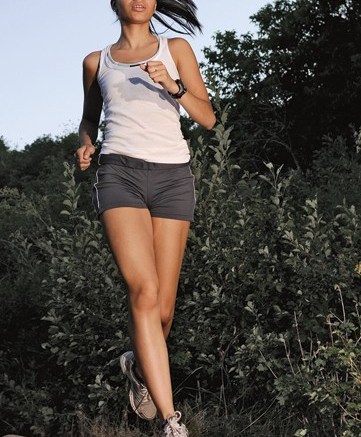 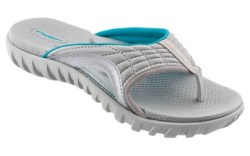 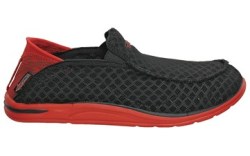 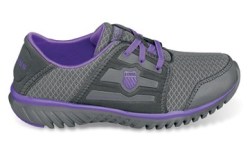 Vendors are hoping 2011 will be the year post-sport footwear captures the consumer’s attention.

The niche category, which claims to aid recuperation after exercise, is getting a boost from a multitude of companies adding product this season, thanks to what they are calling a consumer appetite for technology — and the interest in beneficial footwear being generated by wellness, toning and even natural-motion products. But as the category attempts to grow, retailers remain cautious on the sector, which so far as represented a tiny portion of the business.

This spring, Saucony will debut the $65 Amp Pro2 Reco, a lightweight slip-on sandal for men and women that uses a mineral-infused compression fabric that the brand introduced in apparel last year.

“In the past, we could make a ‘comfort’ recovery shoe, but you can get that from a pair of slippers. These are of real benefit to the athlete,” said Patrick O’Malley, SVP of global product for Saucony, a division of Topeka, Kan.-based Collective Brands Inc. O’Malley said the brand sees potential in casting a wider net, to capture both younger consumers looking for a performance advantage and older consumers who want to extend their time in their sport.

After delaying its launch by a year, Westlake Village, Calif.-based K-Swiss will ship its first recovery style this spring. The Blade Light Recover, an $80 slip-on for men and women, features a compression sleeve, lightweight bottom and memory foam sockliner.

“We felt the benefits of compression as a training or racing aid for athlete recovery had not yet been adopted at the core running level,” Mark Sheehan, director of performance footwear for K-Swiss, said about the decision to hold the product until 2011. “But after we saw Shalane Flanagan finish second in the New York marathon wearing up-to-the-knee recovery socks and compression arm sleeves, and Josh Cox on the cover of a magazine with compression sleeves, we felt consumer interest had been piqued. [People can] relate to a product designed specifically for the recovery aspects of their feet.”

Sheehan and his team are bullish on the category’s prospects. K-Swiss will expand its line in late spring to include a recovery Mary Jane style, and for fall ’11 it will add boots and casual-wear styles for men and women.

“We see recovery as an expansive new category based on the idea that every minute of the non-sleeping day should be spent in recovery footwear,” Sheehan said.

Brands already in the recovery space said consumer interest has indeed been growing.

Sole, a Calgary, Alberta-based brand of insoles, started targeting the athletic market in 2008 with post-run sandals featuring orthopedic support, and last fall it debuted the $75 slipper-like Exhale style. “This is part of a macro foot health trend in the industry,” said Sole CEO Mike Baker. “The barefoot or natural-running craze is a reaction to overbuilt footwear. People right now are interested in accommodative rather than corrective support.”

True to its word, Sole will expand its athletic-world offering for fall ’11, introducing the Excel and Excite, a pair of lifestyle shoes that use the company’s insole technology. “The running and outdoor segments’ growth is outpacing other segments [in our business]. And, in part, our product offering is increasingly catering to these segments,” Baker said.

Rider Sandals, distributed by Orlando, Fla.-based Grendene USA, began targeting the post-run market in 2008 with sandals featuring arch support, aeration and shock-absorption systems. For spring ’11, Rider’s after-sport collection grew to include eight styles for men and women retailing for $20 to $45.

“These technical products are selling well in running stores and we are excited about the growth,” said Rider spokesman J.R. Dubler. “And there are so many other sports fields we can go into. We are working on developing new things.”

But retailers and market watchers aren’t sure the consumer is there yet. “At best, [recovery is] 1 percent of the market,” said Matt Powell, an analyst with SportsOneSource. “It’s a product that has the most appeal to a really committed athlete who’s training really hard. It’s not mass.”

“At the end of the day, this seems like a ploy to get people to buy more shoes,” said Chris Peake, director of performance merchandising at Zappos.com. “Especially the way the economy has been, it’s going to be tough to sell people [on this category].”

Joe Rubio, owner of San Luis Obispo, Calif.-based Runningwarehouse.com, was also dismissive: “We’ve had a couple reps stop by, but all our products are based around running, and we see this as more of a sandal category.”

Other retailers, however, are more open to the potential.

“We’ve been selling Zoot recovery sandals for a couple of years now, and they’ve done very well,” said Bob Cook, owner of Runner’s Edge in Farmingdale, N.Y. “I would consider growing the after-run category in my store. We’ve done so well with compression apparel that it might be an easy leap for the customer to make.”

And Kris Hartner of Naperville Running Co. in Naperville, Ill., bought Saucony’s product for spring. “It’s just a continuation of where we’ve been,” he said. “We’ve always done a good casual after-run business. It’s an add-on purchase for us.”

Retailers said, though, that styling might be an issue for some consumers as these new products are a departure from established looks.

“[Saucony’s Amp Pro2 Reco] has a unique look, but it could backfire,” said Hartner. “It’s not what you expect from an athletic brand.”

Added Ted McGreer, owner of Ted’s Shoe & Sport in Keene, N.H., “[Sole’s] Exhale is a little funky-looking, and some people are not ready for that. They could maybe tweak the upper a little [to achieve broader appeal].”

But brands are confident that the consumer is out there.

“There are always skeptics when you bring a new product into the marketplace,” said Saucony’s O’Malley. “But a lot of athletes are looking for any advantage and are willing to try new things.”